You Are Here: Home → Palestinian PM’s convoy hit by explosion 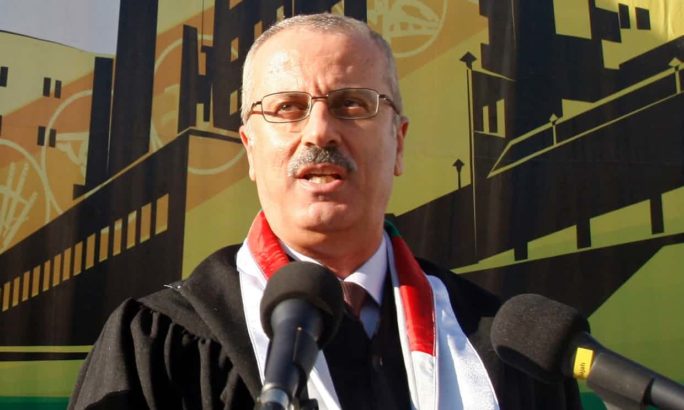 Rami Hamdallah had arrived in Hamas-run Gaza for the inauguration of a long-awaited sewage plant project. Photograph: Abed Omar Qusini/Reuters

The blast occurred shortly after the vehicles entered the coastal enclave through the Erez crossing with Israel. Three cars had their windows blown out, and one had blood visible on the door. Seven people were slightly hurt, according to witnesses.

Rami Hamdallah was unharmed and, just minutes after the apparent roadside bomb attack, was seen on live TV at the inauguration of a long-awaited sewage plant project in the north of the strip. The Palestinian intelligence chief, Majid Faraj, was part of the convoy but was also unhurt.

There was no immediate claim of responsibility, but the Palestinian Authority said it held Hamas, which seized control of the Gaza Strip in 2007, responsible, suggesting it had failed to provide adequate security.

However, it stopped short of directly accusing the group of carrying out the assault. Militants opposed to Hamas also operate in the area and the group described the attack as a “crime”.

A video posted on al-Jazeera showed a large plume of grey smoke while photos showed a crater next to the road.

It said the attack would not derail Hamdallah’s visit, which comes months after Hamas and the West Bank-based Fatah group, which controls the Palestinian Authority, agreed to a reconciliation.

Hamas said the blast was an attempt to “hurt efforts to achieve unity and reconciliation”.

The two factions announced last year that the Palestinian Authority would resume control of Gaza, including border crossings, although the process has since faltered. The deal was intended to end a deadly rivalry after Fatah refused to recognise the 2006 parliamentary elections, leading to a near-civil war that resulted in Hamas taking over in Gaza.

Palestinians now live under two rival governments with Mahmoud Abbas, the western-backed president, left with autonomous enclaves in the Israeli-occupied West Bank. Israel says it will reject any future talks with a unity government that includes Hamas, which rejects the Jewish state’s right to exist.

Crippling restrictions on Gaza’s electricity supply temporarily imposed by the Palestinian Authority have compounded the devastating impact from years of blockades by Israel and Egypt on the movement of people and goods.

Life for 2 million Gazans has become increasingly dire as electricity shortages have led to hospital blackouts.

The White House is hosting a meeting of international representatives later on Tuesday to discuss economic development and the humanitarian situation, which White House envoy Jason Greenblatt has blamed on Hamas’ control.

“The challenge will be determining which ideas can be realistically implemented in light of the fact that the Palestinians of Gaza continue to suffer under the authoritarian rule of Hamas,” he said in a statement.

Tuesday’s explosion occurred near the spot where a US diplomatic convoy was blown up by a remote-controlled bomb in 2003 shortly after it entered Gaza. Three American security specialists were killed and a US diplomat was injured in that blast.

Speaking at the new sewage plant on Tuesday, Hamdallah said the blast would “not deter us from seeking to end the bitter split. We will still come to Gaza.”

The plant was planned in 2007 after overburdened sewage reservoirs collapsed, killing five villagers. The World Bank, EU and other European governments have paid nearly $75m (£54m) towards the cost.

Reuters, the Associated Press, and Agence France-Presse contributed to this report