You Are Here: Home → The Mideast Peace Plan Is Nearly Finished. Is It Dead on Arrival?

The Mideast Peace Plan Is Nearly Finished. Is It Dead on Arrival? 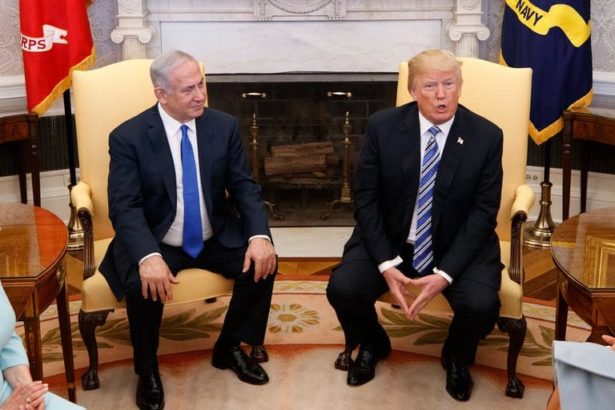 President Trump’s “ultimate deal” is said to be nearly ready for unveiling, but will Palestinians even look at it? The climate is not conducive to success, with Palestinians in boycott mode, Netanyahu looking at fraud charges, Kushner on shaky ground, and Trump himself already busy with North Korea.

WASHINGTON — The Trump administration is putting the finishing touches on its long-awaited Middle East peace plan, three senior officials said on Sunday, and President Trump is likely to present it soon, despite risking swift rejection by the Palestinians and having already taken on another of the world’s thorniest disputes, with North Korea.

While the exact timing of the plan’s release is still not set, these officials said, the most immediate challenge for the White House is how to roll it out so that it is not proclaimed dead on arrival.

The Palestinians remain furious over the president’s decision to recognize Jerusalem as the capital of Israel, and they have refused White House entreaties to come back to the table. The administration is considering simply revealing the document, in the hopes that it will pressure the Palestinians to return.

Another complicating factor is the fluid political situation in Israel. Prime Minister Benjamin Netanyahu, who faces indictment on fraud charges, may call early elections to try to win a popular mandate and shore up his position. His legal troubles, analysts said, will make him even less inclined to make concessions to the Palestinians because that could alienate his right-wing base.

But the quickening pace of activity inside the White House suggests that, regardless of the political headwinds, Mr. Trump will soon unveil a detailed blueprint that one of his senior aides said was intended to help Israelis and Palestinians get around traps and bottlenecks to an agreement. The aide likened it to Waze, the navigation software, developed by Israelis, that helps drivers bypass traffic jams.

The president sees the final destination as the “ultimate deal,” but many analysts regard it as the ultimate lost cause. The effort comes as Mr. Trump is trying to tackle another intractable problem, North Korea’s nuclear weapons program, accepting an invitation last week to meet the North’s leader, Kim Jong-un, sometime in the next three months for negotiations.

To lay the groundwork in the Middle East, the White House is convening a conference on Tuesday to discuss ways to ease the humanitarian crisis in Gaza. But the Palestinian Authority said on Saturday that it would boycott the meeting.

While officials declined to discuss the plan’s content, in keeping with the veil of secrecy they have kept over it since Mr. Trump took office, they said it would not have a set of guiding principles, like the Arab Peace Initiative, first endorsed by the Arab League in 2002, which sketched out the broad contours of an accord and left the details for the two sides to fill in.

For example, the plan will not call for a two-state solution as one of its goals, though it will prescribe pathways for the creation of two states. Nor will it call for a “fair and just solution” for Palestinian refugees, though it will offer steps to deal with the issue of refugees.

Mr. Trump’s aides described a multipage document, with annexes, that proposes solutions to all the key disputes: borders, security, refugees and the status of Jerusalem. They predicted that the Israelis and the Palestinians would each find things in the plan to embrace and oppose.

In delving into the fine details, the White House is turning the traditional formula for peacemaking on its head. Previous presidents, from Bill Clinton to George W. Bush, avoided going beyond broad strokes for fear that it would give both sides more to object to. But officials said that was no longer sufficient.

The aides who wrote the plan — Jared Kushner, Jason D. Greenblatt and David M. Friedman — had no experience in diplomacy when they took up their jobs. Mr. Kushner is Mr. Trump’s son-in-law and senior adviser; Mr. Greenblatt was the chief legal officer of the Trump Organization; and Mr. Friedman is a bankruptcy lawyer.

Nobody outside the administration has seen the document, officials said, though Mr. Kushner, Mr. Greenblatt and Mr. Friedman met for several hours with Mr. Netanyahu at Blair House, near the White House, last Sunday, the day before he met with Mr. Trump.

On Sunday, Mr. Netanyahu told his cabinet that “there is no concrete U.S. peace plan on the table,” according to an Israeli television station, Channel 10 News. American officials said their planning was not dictated by foreign leaders.

For his part, Mr. Trump still sounds committed. Welcoming the prime minister to the Oval Office, he insisted that he still had a “very good chance” to broker an accord. “The Palestinians, I think, are wanting to come back to the table very badly,” he said.

There is little evidence to support that. By recognizing Jerusalem, and speeding up plans to move the American Embassy there from Tel Aviv, the United States has forfeited its role as a credible broker, the Palestinians say. They have put their energies into trying to enlist other countries to replace the Americans.

Mr. Trump’s repeated declarations that he has taken Jerusalem “off the table” further antagonized the Palestinians, seeming to dash their aspirations to make the holy city the capital of a future Palestinian state.

Diplomats from Arab countries said the Jerusalem decision had made it politically untenable for them to press the president of the Palestinian Authority, Mahmoud Abbas, to return to the table because of the outcry it would cause within their own publics.

Mr. Trump and Mr. Kushner have invested a lot in developing relationships with Persian Gulf states like Saudi Arabia and the United Arab Emirates. But officials said the White House was not counting on its Arab friends to promote the president’s peace initiative.

Mr. Trump’s aides have faced other setbacks. Mr. Kushner was recently stripped of his top-secret security clearance, raising questions about his status as a top adviser and even his longevity in the White House. Officials said it would not hamper his ability to negotiate but could limit his access to sensitive intelligence.

The Gaza conference, which will be led by Mr. Kushner and Mr. Greenblatt, is designed to give momentum to efforts to stabilize the Palestinian territory, which has been racked by shortages of medicine and water after years of a blockade by Israel and Egypt.

In a recent op-ed article in The Washington Post, Mr. Greenblatt blamed Hamas, the militant group that rules Gaza, for the suffering there. But he said that Hamas’s role did not “absolve us of the responsibility to try to help.”

“We are beholden to find a path to a brighter future for the Palestinians of Gaza,” he wrote.

Alleviating the crisis in Gaza is important to the peace initiative, officials said, because any accord between Israel and the Palestinians that does not account for the territory is incomplete. For the White House, however, the more basic question is whether it can ever reconcile with the Palestinians.

On Saturday, a senior Palestinian official, Ahmed Majdalani, said the Palestinians had turned down the White House’s invitation to attend the conference because America’s goal was to “liquidate the Palestinian national project.”

Mr. Trump’s aides said they had not abandoned hope that the Palestinians would come back. But they acknowledged that they might have little choice but to release the plan and hope it is not rejected out of hand.