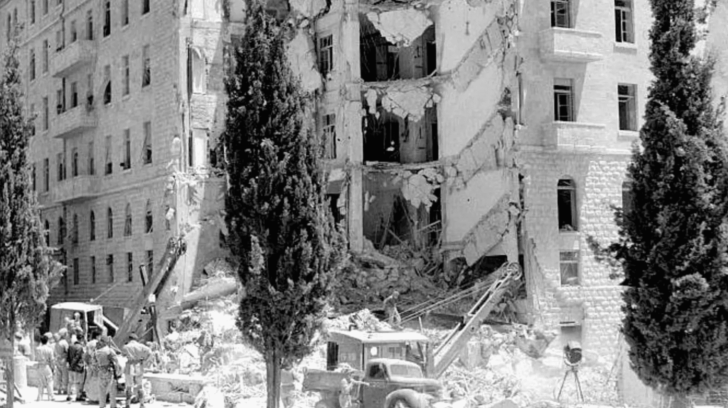 The destruction after the 1946 bombing of Jerusalem’s King David Hotel. Credit: Wikimedia Commons

Terrorism has not only been around since before the founding of Israel – it has been tolerated, empowered, even glorified. All the while, Palestinians have been condemned for their resistance.

Israel has a terrorism problem it’s unwilling to talk about.

I understand the reluctance.

Every now and then, I realize that I need to say something out loud, something painful, something I myself am not going to like, if only because I myself need to hear it. So here’s this:

We in Israel need to seriously address the history, the consequences, and, yes, the heritage, of our own terrorism.

Two weeks ago outside a courtroom in the mixed Jewish-Arab town of Lod, some 20 young Jews danced and chanted in celebration of the grisly 2015 fire-bombing murder of an 18-month-old Palestinian baby, Ali Dawabshe, killed in his bed in the West Bank village of Duma.

Ali’s parents were also killed in the attack, and his four-year-old brother Ahmed was critically burned.

The celebrants, wearing the outsize skullcaps and long forelocks favored by militant “price-tag” settlers, surrounded Ali and Ahmed’s grandfather Hussein Dawabshe as he left the court where the three Jewish murder suspects were on trial.

“Where is Ali? Dead! Burned! There is no Ali!” they jeered at the grandfather, who has raised the four-year-old Ahmed and seen him through the grueling healing process since the attack. “Ali is on fire! Ali is on the grill!”

“Police officers and the ministers who were present at the court chose not to intervene,” Ynet reported at the time, “letting the demonstration of hatred and racism continue.” The Israel Police were later quoted as explaining that officers did not intervene because “There was no violent rioting.”

Apart from the question of how the police would have reacted had the demonstrators been Palestinians and the victim a Jewish child – recent experience leaves little doubt that the result would have been beatings, injuries and arrests – it is worth paying attention to the response of Prime Minister Benjamin Netanyahu and his cabinet, who are consistent and immediate in strafing social media after every event involving Palestinian terrorism:

There it is. Israel has a terrorism problem which has been part and parcel of Zionism even before the state was founded. It’s there every time Benjamin Netanyahu waxes moral, declaring that the Palestinians erect monuments to their terrorists, while we build tributes to peace.

Consider, as but one example of thousands, Netanyahu’s meticulously produced video statement with which he opened this school year, excoriating Palestinians for building monuments to honor terrorists who killed Jews.

“Children should be taught to love and respect, not hate and kill,” Netanyahu intones, his palms clasped in sincerity.

“There are so many champions of peace to dedicate statues to. Why do the Palestinians consistently choose to honor mass murderers?”

What Netanyahu did not say, was that entire Birthright trips could be built around the plaques and monuments which Israel has erected in recent years to honor the bombings and other terrorist killings committed by the members of the Irgun Zvai Leumi and Lehi pre-state underground groups – not to mention the highways, boulevards, schools, and town squares named for the armed bands’ respective commanders in chief – the late Israeli prime ministers Menachem Begin and Yitzhak Shamir.

There is also the gravesite and pilgrimage site in the West Bank settler city of Kiryat Arba, honoring the memory of Baruch Goldstein, who close to the Purim festival in 1994 gunned down 29 Palestinians kneeling during worship at Hebron’s Tomb of the Patriarchs.

As recently as 2010, Jewish residents of East Jerusalem’s Sheikh Jarrah neighborhood were filmed celebrating Purim by singing “Dr. Goldstein, there is none other like you in the world. Dr. Goldstein, we all love you he aimed at terrorists’ heads, squeezed the trigger hard, and shot bullets, and shot, and shot.”

Our terrorism problem has grown so cosmeticized as to have become all but invisible. Hidden in plain sight.

It was there at the opening of the landmark official visit of Britain’s Prince William. It was there in the breezy dispatch of Israel 10 Television News correspondent Akiva Novick, who reported, in a reference to former Israeli prime minister Menachem Begin’s Irgun Zvai Leumi armed underground:

“For the first time ever, an official visit of a member of the Royal Family, and in the place blown up 72 years ago by IZL men in one of the operations which brought about the end of the British mandatory rule here.

“It took very many years for the British to restrain themselves, or to have absorbed this insult.”

“The terror attack on the King David Hotel in Jerusalem was in its day the equivalent of the Twin Towers,” wrote historian Tom Segev in 2006, after Benjamin Netanyahu had taken center stage at a commemoration celebrating the 60th anniversary of the attack. Years later, Segev would call it, “at the time the most lethal terrorist attack in history.”

The blast, which levelled six floors of a wing of the hotel with 350 kilograms of explosive, killed 91 people, all but 16 of them civilians. Most of the dead were British government staffers or hotel employees. There were 41 Arabs, 28 British citizens, 17 Jews, two Armenians, one Russian, one Greek and one Egyptian. 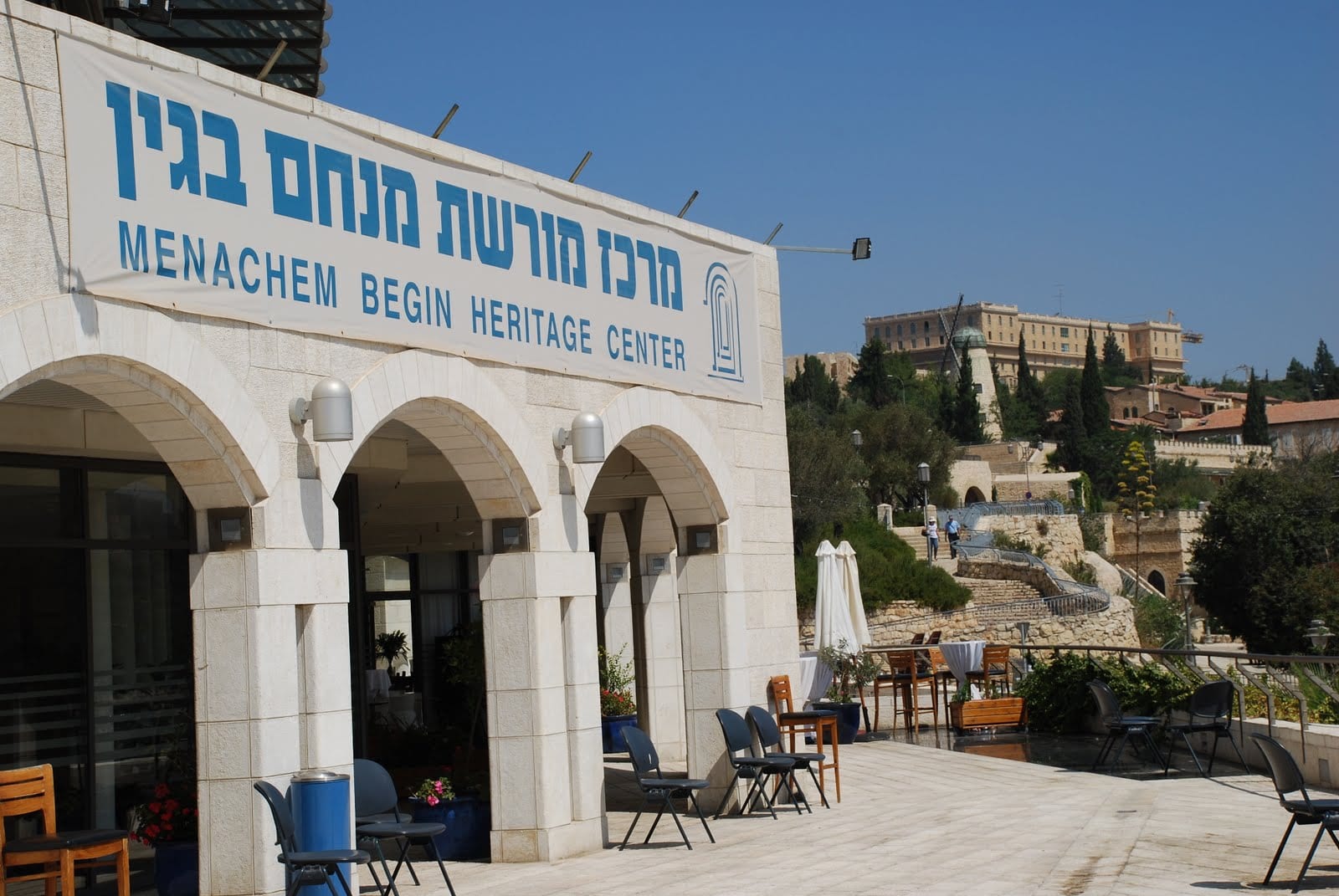 At the two-day 60th anniversary event at the Menachem Begin Heritage Center, Netanyahu joined IZL veterans and academics who sought to prove, once and for all, that the bombers and gunmen of Begin’s IZL and of future prime minister Yitzhak Shamir’s radical Lehi underground – which carried out high-level political assassinations – had been freedom fighters and not terrorists.

They insisted that the occupants of the King David had been given fair warning, a claim disputed by British authorities.

They spoke of the bombing as the most significant event in driving the British out of Palestine and paving the way for Israel’s independence, a claim widely disputed by historians but significant in its subtext – that terrorism, in the end, pays. 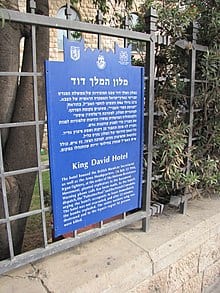 The climax of the 60th anniversary observance was the unveiling of a large plaque near the King David, commemorating the bombing.

At the time, Simon Macdonald, the British ambassador to Israel, along with consul general John Jenkins, wrote to the mayor of Jerusalem protesting the plaque. “We don’t think it’s right for an act of terrorism to be commemorated,” they wrote. The British embassy added that: “There is no credible evidence that any warning reached the British authorities.”

The text of the plaque was altered slightly, but the monument remained.

Netanyahu, meanwhile, who had just suffered a crushing defeat in the 2006 elections, his Likud coming in a dismal fourth with only 12 Knesset seats and less than nine percent of the vote, was readying a comeback.

Among the cornerstones of his campaign would be – and is to this day – his condemnation of the Palestinians for honoring terrorists. Still, the reminders of Jewish terrorism continue to present themselves. As the UK Jewish Chronicle wrote in 2016 in a reference to the highest-ranking Jewish victim of the King David bombing, the Manchester man who served as under-secretary of the Palestine treasury:

“History’s joke is that Julius Jacobs’s house in Jerusalem became the prime minister’s official residence for two decades. Its last occupant was Yitzhak Rabin, who then moved to the new residence on Smolenskin Street. Mr. Begin, the succeeding prime minister, was thus saved from having to confront the ghosts of the past each day and to be reminded of a British Jew who had died unnecessarily in such tragic circumstances.”

*Editor’s note: Evangelical support for Israel has been promoted by Israel for many decades. See “The back story of Passages, Museum of the Bible’s program to take Christian college students to Israel” and “Against Our Better Judgment: The Hidden History of How the U.S. Was Used to Create Israel” Despite this, evangelical support for Israel seems to be declining; see “Christian Evangelicals Increasingly Support Palestinian Human Rights”.