You Are Here: Home → An ordinary week in the Occupied Palestinian Territories

An ordinary week in the Occupied Palestinian Territories 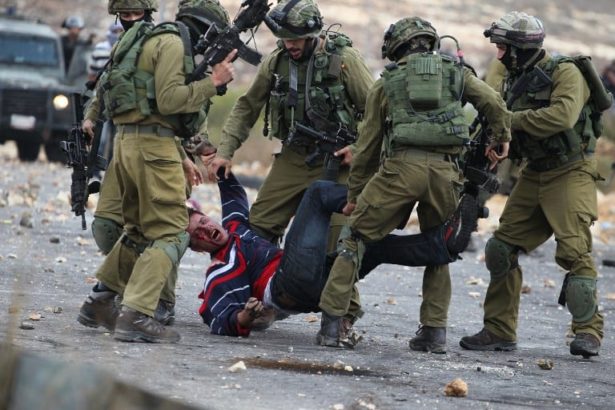 Gaza’s Great March of Return makes the news from time to time, as does the occasional escalation of that ongoing hostility; the near-demolition (still pending) of Bedouin village Khan al Ahmar was briefly on the radar this week.

Other than that, life in the occupied Palestinian territories must be pretty unremarkable.

What does “unremarkable” look like in the West Bank and East Jerusalem under occupation? Here’s a glimpse.

Some people think that the Occupied Palestinian Territories are places where normal life happens most days, and then occasionally some residents get a little ornery and throw some stones or a Molotov cocktail.

In actuality, every day of life under occupation is full of routine aggravations like checkpoints, closed roads, and constant monitoring. Every day also has its share of surprises (not the good kind) too. Below is a sampling of headlines and excerpts from articles from just the past week.

Attacks on academia and education – headlines:

The Israeli army raided, on Tuesday, a school in the village of Khillat al-Dabe, in Masafer Yatta, and informed the head of the Twanneh village council, Muhammad Ribee, that it will be removed.

Israeli police surrounded the entrances of the neighborhood in the early morning hours, while bulldozers proceeded to demolish the four houses under construction, under the pretext of “unauthorized construction”.

Almost all construction applications filed by the Palestinian, to build on their own lands in Area C, are denied by the Israeli authorities, an issue that forces dozens of expanding families to build without permits to accommodate their expanding families.

The flooding of waste and toxic water from a chemical plant in the Industrial Zone of the illegal Alfie Menashe Israeli colony continues to devastate Palestinian agricultural lands, and the environment, exposing the residents to serious health risks and forcing many farmers away from their lands.

Wad ar-Rasha is one of the most devastated villages by the illegal Israeli policies, allowing the illegal colonies to operate chemical plants that constantly flood their waste the Palestinian lands.

It also lost 460 Dunams of its 500 Dunams lands to the illegal construction and expansion of the colonies, while the residents are literally fighting for their own existence there.

The Israeli army claimed the soldiers were searching for “illegal irrigation systems.”

(In Summer, the Palestinians go for several weeks at a time without running water, and in numerous cases, the army demolishes Palestinian water wells, while the illegal colonialist settlers enjoy plenty of water for their homes, colonies’ lands, and swimming pools.)

Kufur Qaddoum holds protests, every Friday and Saturday, against the Annexation Wall and illegal colonies, built on their lands, and to protest the closure of the towns’ main road, which was blockaded fifteen years ago, to enable easy access for colonialist settlers driving to and from Kedumim colony, which was built on private Palestinian lands.

Media sources said the soldiers chased and removed Palestinian journalists, invaded and searched many homes, and occupied several rooftops to use them as firing posts and monitoring towers.

They added that the soldiers also closed the main road in Bab az-Zawiya area, in the center of Hebron city, and fired gas bombs, smoke grenades and rubber-coated steel bullets.

Some common themes in abductions include: breaking into homes in the middle of the night; accusing children and young men of throwing stones; refusing to tell families where their family member is being taken; stealing money or valuables from the family.

Rights Groups: Israel detained more than 3500 Palestinians so far in 2018, including 651 children

Locals said that Israeli forces detained 1 Palestinian – hei was detained after he was assaulted by Israeli settlers and soldiers.

Army Invades Many Neighborhoods In Jenin

Army Turns Under Construction Home Into A Military Post

Israeli soldiers invaded, on Friday at night, the town of Ya’bad, and broke into an engagement party after installing a military roadblock in front of the celebration hall. Soldiers invaded the town, searched cars, investigated ID cards, and interrogated many Palestinians, including the groom.

The Israeli District Court of Lodd in northern Israel decided on Thursday to set free an Israeli settler involved in the arson murder of the Palestinian Dawabsheh family on July 31, 2015. The fire killed the parents and an 18-month-old baby, while causing severe burns to their 4-year-old child, the only surviving member of the family.

The court placed the murderer, a minor, under house arrest and banned him from leaving the country or using phones or internet.

According to Ha’aretz, the defendant confessed to 6 hate crimes – 4 arson attempts and 2 acts of anti-Palestinian vandalism and hate graffiti.

A Palestinian media agency that is known for being first on the scene and recording eyewitness videos of Israeli military atrocities against Palestinians has been banned by Israel, as the Israeli Defense Minister and former nightclub bouncer Avigdor Lieberman signed an order declaring Al-Quds TV to be a ‘terrorist’ media organization.

The passengers on the boat included wounded Palestinians who had exhausted the limited medical resources available in Gaza and were seeking treatment abroad.