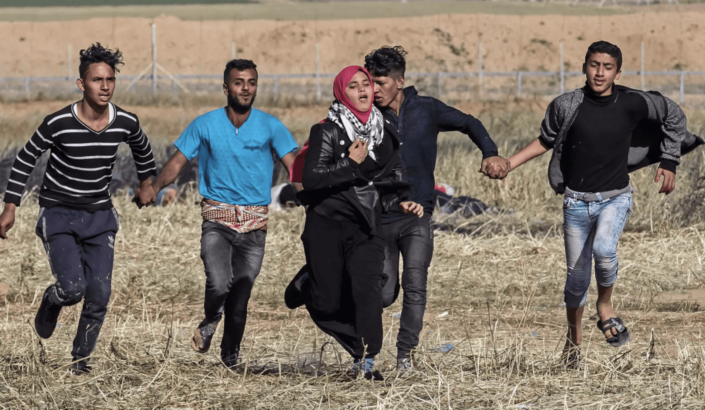 Even before the protest began, Israeli spokespeople framed it preemptively as a Hamas production, even though it was supported by Gaza civil society organizations and all political parties. Civilian Gazans’ willingness to walk to that fence measures their yearning to express themselves as humans and claim their freedom, even at immediate risk.

In 1988 at the gates of Jerusalem’s Old City, I watched Palestinian youths face down Israeli soldiers. The soldiers held rifles, while the Palestinians held stones. That asymmetry sent the Judaism of my childhood crashing headlong into my sense of justice. The stones demanded that I ask, “What could make a young man risk his life this way?”

My work with war-affected communities later brought me to the Gaza Strip. Living there from 2011 to 2015, I confronted Israel’s power from the ground.

On Friday, Land Day, unarmed Gazans confronted this power once more; they were commemorating the six unarmed protesters who were killed 42 years ago in 1976 as they protested the expropriation of Arab-owned land in northern Israel. Organizers in Gaza had called for a season of nonviolent protest lasting until the day of the so-called Nakba, when Palestinians mourn the losses of 1948, asserting the rights of refugees who comprise the majority of Gaza’s population.

Tens of thousands of Gazans walked toward the border facing a heavily armed Israeli line. They walked toward rifles and drones. Israel had announced its deployment of a hundred snipers authorized to use live ammunition. And fire they did; the United Nations reports 15 dead and 1,416 wounded, including 750 hit by live ammunition, of whom 20 are in critical condition.

Gazans walked into all that, demanding that we ask, “What is happening in Gaza to make them risk their lives?” That is the bedrock question. Layers of language are being heaped upon it, to obscure it.

Even before the protest began, Israeli spokespeople framed it preemptively as a Hamas production. If the march is merely Hamas’ political positioning, they imply, there is no need to seek a deeper understanding.

However, Hamas is not Gaza and Gaza is not Hamas. Civilian Gazans’ willingness to walk to that fence is not a measure of their support for Hamas. It measures their yearning to express themselves as humans and claim their freedom, even at immediate risk.

Benjamin Netanyahu presented the killings as the defense of Israel’s border. However, a border is an agreed line. This line is the unilateral, military demarcation of an illegal blockade.

The Israeli army additionally militarizes a belt of Gaza’s agricultural land, intruding a further 300 to 500 meters into Gaza. That is the zone in which live fire is being used. Gazans are walking and being killed, on their own land. Walking in protest is not a capital crime in other places, and human rights group B’Tselem calls Israel’s attempt to control the Gaza protest with live fire “absurd.”

Netanyahu declared his policy of “war on stone-throwers” in 2015, arguing that a stone justifies the use of deadly force. Perhaps to Humpty Dumpty it does. However, since those nights of the 2014 war, when Israel rained bombs onto Gaza each minute, I have wanted to ask him exactly how much deadly force is needed to justify a stone.

At the moment, the stones detract from the greater power of unarmed Gazans, walking.

Israeli voices have justified even the country’s most grievous violence against Gaza as being necessary to safeguard Israelis’ normal lives. Normal? Two million Palestinians exist behind a wall, deprived of their fundamental rights to clean water, health, work, mobility. They are held in place by a structural violence that has become Israel’s lifestyle, propped up by law, dehumanizing rhetoric, politics and arms.

The failure to resolve the Palestinian conflict has helped to make Israel the most militarized country on earth. It is that choice that the violence protects, and there’s nothing normal about it.

Chemi Shalev fears “preposterous” comparisons to Birmingham, Alabama and apartheid South Africa, if these protests “compel the IDF to kill and maim unarmed civilians.” No one is compelling the IDF to kill.

Gaza doesn’t need to be Birmingham or Soweto to learn from them. When entrenched injustice refuses to right itself, mass nonviolent protest can help build and broaden the pressure that upends systemic wrongs.

To understand why Gazans are willing to pit their bodies against an army, peel away the political positioning on all sides. Instead ask, “What quality of life has convinced tens of thousands of human beings that such danger represents their best hope – and why aren’t they allowed to walk?”

Marilyn Garson worked with communities affected by war from 1998 to 2015, including in the Gaza Strip from 2011 to 2015. She writes from New Zealand. Her blog is Transforming Gaza. Twitter: @skinonbothsides