You Are Here: Home → Gaza March Massacre draws a wide range of reactions 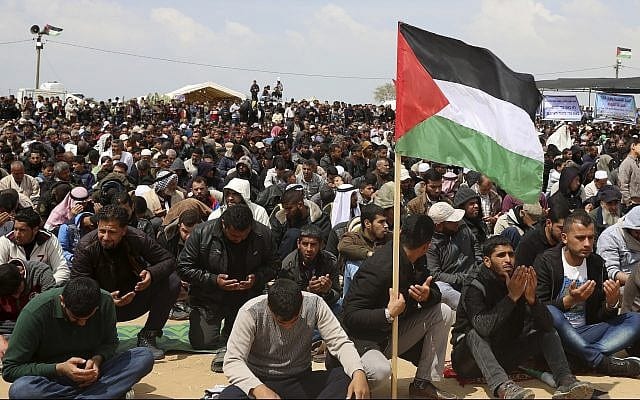 The world was watching as peaceful Gazan protesters met heavily armed Israeli soldiers at the border Saturday. Responses to the violence range from full support to utter denial.

The people of Gaza – the majority of of whom are refugee families that were ethnically cleansed by Israel in 1948, have been living under illegal Israeli occupation for 50 years, and a brutal siege for 10 – held a nonviolent protest at the border with Israel last Saturday. The Israeli military, incapable of nonviolence, showed up armed and dangerous, and killed at least 17 of the protesters, as well as a farmer harvesting parsley. Now that the dust has settled and the dead have been buried, let’s see how various individuals and groups reacted to the incident.

Gerry Adams, an important political voice in Ireland and an instrumental player in the Northern Ireland peace process, had words for Israel in the wake of the massacre:

There can be no justification or excuse by Israel for the calculated slaughter by Israeli military snipers of unarmed Palestinian protesters on the Gaza border with Israel…The international community has consistently failed to defend the rights of the Palestinian people. The ill-treatment of the Palestinian people by Israel is a dark stain on the reputation of the international community…I am urging the EU and the UN to take a stand against Israeli violence. I would especially urge the Irish government to expel the Israeli ambassador as a first step in formally and officially recognizing the state of Palestine. The time for excuses is long over.

Human Rights Watch stated that “Israeli soldiers were not merely using excessive force, but were apparently acting on orders that all but ensured a bloody military response to the Palestinian demonstrations,” and that “the killings highlight the importance of the International Criminal Court prosecutor opening a formal investigation into serious international crimes in Palestine.”

Israeli human rights organization B’tselem strongly condemned Israel’s violence, insisting that Gaza is not a “combat zone” and the protest does not require lethal force.

Turkish President Recep Tayyip Erdogan condemned Israel for its “inhumane attack” in Gaza. Erdogan spoke by phone with US President Donald Trump on Friday, and asked him, “Aren’t you going to intervene here?”

Pope Francis made reference to the conflict on Easter Sunday, calling for “reconciliation for the Holy Land, also experiencing in these days the wounds of ongoing conflict that do not spare the defenseless.”

The EU’s diplomatic chief Federica Mogherini called for an “independent and transparent investigation” into the use of live ammunition by Israel, adding, “Freedom of expression and freedom of assembly are fundamental rights that must be respected.”

Palestine flags out in force at Celtic game today in solidarity with those killed in Gaza pic.twitter.com/4mLEY2ijGD

Venezuela condemned the massacre, the president affirming his country’s support for the Palestinian cause.

How about US mainstream media?

U.S. media reports largely replicated the Israeli PR talking points about the massacre. As a writer in Israel’s Ha’aretz newspaper noted (and an Israeli group had earlier reported): “Even before the protest began, Israeli spokespeople framed it preemptively as a Hamas production.”

U.S. media followed this line, despite the fact that the protests were supported by Gaza’s civil society organizations, all of its diverse political factions, and the population in general.

CNN made the incident out to be a cold, “calculated plan” by Hamas, hinting that the group was willing to sacrifice innocent Palestinians in exchange for international sympathy. Jake Tapper grilled Bernie Sanders: “The Israeli government called the protests ‘violent terror demonstrations; the ambassador from Israel to the States said Hamas fighters were interspersed throughout the crowd, using human shields, and were killed after making ‘direct attacks’ on Israeli positions. Do you not accept the Israeli’s government’s explanation?”

Sanders replied, “No I don’t…my assessment is that Israel overreacted on that.” He stopped short of true criticism or use of loaded words like “occupation.”

Meanwhile, the situation in Gaza remains a humanitarian disaster. The U.S. must play a more positive role in ending the Gaza blockade and helping Palestinians and Israelis build a future that works for all.

ABC provided excuses for two highly publicized videotaped killings showing a man shot in the back while running away from the border, and a man shot while praying. An Israeli army spokesman explained it all away, claiming that in one case the victim was a terrorist, and in the other that the video was fabricated. “Hamas staged the mass march as a cover for attacks,” he added.

NBC unquestioningly quoted the same Israeli army spokesman, who denied allegations of excessive use of force and claimed the dead had all been violent militants.

CBS framed its reporting on the fallacy that the protest was created by Hamas, “an Islamic militant group sworn to Israel’s destruction.” The article provided the Israeli explanation for the incriminating videos, accusing Hamas of releasing incomplete, edited, or “completely fabricated” clips. According to the Israeli source, troops had scrupulously followed rules of engagement. He also alleged that Gaza health officials had exaggerated the statistics about the numbers wounded by live fire, stating that only a few dozen were injured by live fire, not 750 as stated by some sources – including Ha’aretz.

In one FOX report, the spin was dizzying: “Thousands of Palestinian protesters started throwing stones at Israeli troops, and the scene went from bad to worse.”

United Nations Secretary-General António Guterres called for an independent investigation into the massacre in Gaza, but the United States, as usual, blocked it. Walter Miller, an adviser at Washington’s U.N. mission, explained, “Bad actors who use protests as a cover to incite violence endanger innocent lives.”

And finally, Israel Army radio host Kobi Meidan posted on his Facebook page, “Today, I’m ashamed to be Israeli,” angering army officials and resulting in his suspension. Defense Minister Avigdor Liberman declared, “I’m ashamed that we have a presenter like that on an army radio station.”

Before long, Meidan was deep in conversation with the commander of Army Radio, backpedaling on his position, stating he “did not write a word against the IDF soldiers who were dear to us all, and that was not the intention, and if that was what was understood, I apologize for it.”

Following that statement, Army Radio said Meidan would not be fired.

That last story so perfectly embodies the standard operating procedure that nothing more needs to be said.

Except this: Since the dust has settled and the dead have been buried, two more Palestinians have just been shot and killed by Israeli soldiers, one in the West Bank and one in Gaza.

Kathryn Shihadah is a staff reporter for If Americans Knew