You Are Here: Home → Israeli forces shoot deaf child in head in Gaza, Israel will not investigate deaths 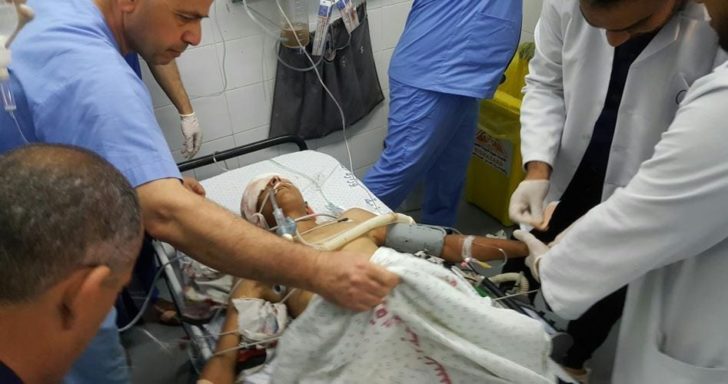 A Palestinian deaf child was shot and seriously injured by Israeli gunfire east of Khuzaa town to the east of Khan Younis city in the southern Gaza Strip on Sunday.

The spokesman of the Palestinian Health Ministry, Ashraf al-Qudrah, affirmed that the boy sustained a critical injury in the head and that he was transferred to the European Hospital in Gaza where he is receiving treatment.

Israel’s defense minister rejected on Sunday calls for an inquiry….

…In a Gaza hospital on Sunday, a 12-year-old Palestinian boy hit by Israeli gunfire on Friday said that when he approached the border fence with others in the crowd, he thought he would be safe as long as he did not touch the barrier or throw stones.

“I was just standing there when I felt something hit my leg and it pushed me to the ground,” the boy, Bashar Wahdan, told Reuters, estimating his distance from the fence at 30 meters (yards). The bullet cut through blood vessels and broke a bone.

At his bedside, Bashar’s father said he had no idea his son had gone to the protest. Read more

Gaza hospitals report that they are running out of medicine and supplies.

Al Jazeera reports: “head of the ICU at the hospital, told Al Jazeera that all the injuries coming into the hospital were centred on the head, knee joints or pelvic joints.”

“This shows that Israeli forces were shooting-to-kill, or to cause disabilities,” he said.

The Israeli military tweeted early on Saturday that its soldiers’ gunshots in Gaza were “accurate and measured, and we know where every bullet landed”. The tweet, which was later deleted, was preserved by the Israeli human rights group B’Tselem and retweeted by many others.

The UK Telegraph reports: “When asked by reporters a spokesman could not say how many live rounds the Israeli military fired on Friday or how many people were shot. The military later deleted the tweet.”