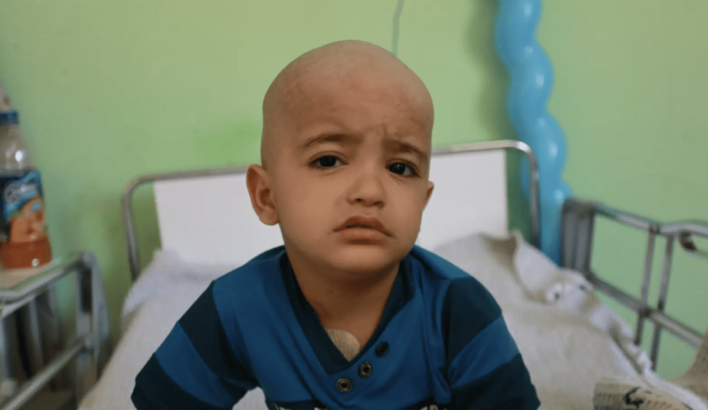 Three-year-old Louay Al Khoudari from Gaza in Nablus hospital without his mom, August 2018.

With many thanks to the Goldin family – whose son’s remains are being held by Hamas – Israel is withholding humanitarian exit permits, especially to Gazans “related to Hamas members.” This leaves little Louay without a relative for his trips to Nablus for chemo.

Israel is not allowing a Gaza mother to accompany her 3-year-old son to a hospital in the West Bank city of Nablus for cancer treatment. Security sources told Haaretz that the reason was that she is a first-degree relative of a Hamas member and therefore, may not leave the Gaza Strip. The woman had to resort to Facebook to find eligible unrelated women to accompany her son for medical treatment.

The child, Louay Al Khoudari, was diagnosed with aggressive soft tissue sarcoma in January, at the age of two and a half years. At first he was treated in the Augusta Victoria Hospital in East Jerusalem and at Hadassah Hospital in western Jerusalem, and as of May, began to receive treatment at the An-Najah Hospital in Nablus.

At first the boy’s aunt took him, but her own medical condition put a stop to that. Since no other relative could be found to take him, he missed two treatments, in June and July.

In despair, the mother uploaded a post on Facebook, asking for unrelated women to accompany her son. The post includes a video clip of the boy on her lap, while she describes the surgery he underwent and the torments involved:

From needles to sutures, operations, there isn’t a place on his body that hasn’t been operated on. Every time my son goes, they open his body. I expect you to help me and accompany my son because there’s nobody else [the next appointment] is very soon. You see my son’s condition. He takes six doses each time and you must know how painful this treatment is.

A woman who saw the post volunteered to accompany Louay and did receive permission to leave Gaza for his appointments in July and this week. But the doctor in Nablus recommends that the mother come herself next time, to improve Louay’s chances of healing.

Ahead of Louay’s treatment this week, the organization Physicians for Human Rights asked the District Coordination and Liaison Administration to end this “absurd” situation forced on the child and his mother, and allow them to go together to future treatments. In its letter, the organization notes “categorical peril to the boy’s health and life.” It did not work, and Louay went for treatment with the woman he doesn’t know.

In principle, a security source told Haaretz, if there are no security-related restrictions when minors need medical treatment, the absolute preference is for parental accompaniment. But when there is a security obstacle, they allow somebody else acceptable to the family, who meets the security requirements, to attend to the minor.

“While examining her request, it turned out that Hannan is a first-degree relative of an activist in the Hamas terror organization,” the source said. “Therefore, based on the directives at the political level, her request was denied.” The child himself was allowed into Israel for the treatment, accompanied by a relative, from March to July, the source said.

The spokeswoman for the Coordinator of Government Activities in the Territories commented that allowing Gaza residents into Israel is not an automatic right, and is permitted only in compliance with policy and subject to security checks.

“Moreover, according to a government resolution, residents of the Strip with first-degree family ties to activists in the Hamas terror organization may not receive permission to enter Israel,” she said.

The case of Al Khoudaris is not an isolated one. In January 2017, the security cabinet decided to cut the number of humanitarian exit permits from Gaza, at the behest of the Goldin family, to exert pressure on Hamas to return the body of their son, Hadar Goldin. There has been a steep increase in reports that Israel is refusing exit permits due to having a “being related to a Hamas person.”

In late July, seven seriously ill women needing life-saving treatment that cannot be obtained in Gaza, who were denied permission to leave the Strip because of such relationships, appealed to the High Court of Justice.

Their case is supported by four human rights organizations: the Al Mezan Center for Human Rights, Adalah – The Legal Center for Arab Minority Rights in Israel, Gisha Gateway (the right to mobility) and Physicians for Human Rights.

Immediately after the lawsuit was filed, the commander of the Coordination and Liaison Administration announced that one of the women petitioners had turned out not to be related to a Hamas person, in contrast to the previous claim. The woman should file a new application, the commander said.

Dying to Leave Gaza – and Get Back In