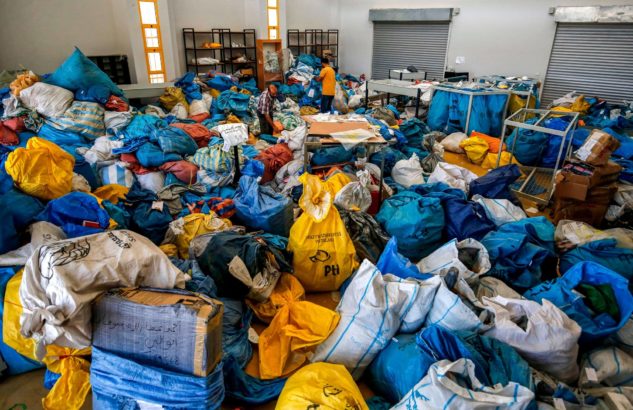 Palestinian postal workers sift through undelivered mail dating as far back as 2010 at the post office in Jericho. The mail had been blocked by Israel.

Here is yet another example of Israel’s obsession with controlling every aspect of Palestinian life: for 8 years, it has been hoarding mail, and now it has delivered 10 tons of old letters and packages at once.

Ten tons of letters and packages, which Israel had long prevented from reaching Palestinians in the occupied West Bank, have finally been delivered. Some of the pieces are eight years old.

The mail, held in Jordan, began being released to the Palestinian Authority on Monday, according to a statement from Palestinian officials. Some of it was badly damaged after the yearslong delay.

Israel controls all goods coming in and out of the Palestinian territories, and the Israeli Postal Service sorts mail destined for the West Bank and the Gaza Strip. Goods are regularly blocked from entering the areas, more strictly for Gaza, on what Israel describes as security grounds.

A 2016 agreement was intended to allow mail to be received directly by the Palestinian postal service, but was never fully implemented.

Allam Moussa, the minister of communications and information technology for the Palestinian Authority, said the seized mail included items “coming from around the world, carrying packages, gifts and purchases that did not arrive on time because of the regrettable refusal of the Israeli side.”

The release came after long negotiations with Israel, and Jordan played an instrumental part in getting the mail to its destination, Mr. Moussa said.

Palestinian Post, which is responsible for distributing mail once it arrives in the West Bank, published photos on its website showing staff unloading bag after bag from the back of a truck at Jericho’s general post office. The floor of a warehouse was covered by bags of mail, some piled to shoulder height.

Mr. Moussa said the delay had “implications for citizens’ confidence in Palestinian mail” and contributed to thousands of dollars in losses for Palestinian Post.

The Coordinator of Government Activities in the Territories, the branch of the Israeli Defense Forces responsible for civilian operations in the Palestinian territories, said in a statement that the delivery was a good-will measure.

Israel and the Palestinian Authority, which administers parts of the West Bank, signed an agreement last year to limit the seizures of mail delivery to the area, the agency said in a statement.