You Are Here: Home → New anti-boycott bill would be more extensive than previous legislation

New anti-boycott bill would be more extensive than previous legislation 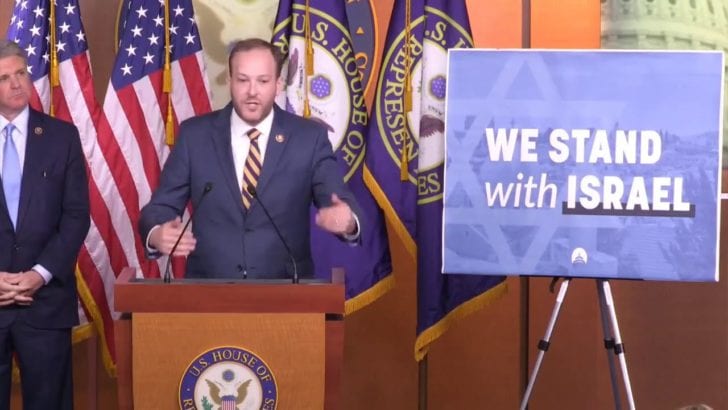 The latest anti-BDS bill seeks to prohibit Americans from participating in UN- and EU-issued calls to boycott Israel, and fails to hold Israel accountable for human rights violations.

The Boycott, Divest, and Sanction movement (BDS) aims to pressure Israel to comply with international law using methods that helped end apartheid in South Africa. The objective is to secure for Palestinians their fundamental right to full equality.

Zeldin’s bill joins at least six other anti-BDS bills introduced in 2019 (two of them, both House resolutions, have passed). It is unique in that its reach would include “international governmental organizations” – specifically, the United Nations and the European Union, both of which have backed efforts to boycott products made in illegal Israeli settlements.

Current law states (H.R.5515, sections 1772-1773) that if a foreign country calls for a boycott of a country with which the US is “friendly,” US citizens are encouraged – or in some cases, required – to refuse to participate. “The President shall issue regulations” prohibiting compliance with the boycott or supporting it by informing on others who have business relationships with the boycotted country.

The new bill seeks to amend H.R.5515 to also prohibit Americans from participating in boycotts “fostered or imposed” by “international governmental organizations,” referring to the UN and the EU.

The language of Zeldin’s bill assumes US unwavering support for Israel, and judges the recent increase in boycott actions as “discriminatory”:

It is the sense of Congress that the Government of the United States should use its voice, vote, and influence with and in international governmental organizations to actively oppose politically motivated actions to boycott, divest from, or sanction Israel.

The wording also includes the “sense of Congress” that boycott efforts display “a concerted effort to extract concessions from Israel outside of direct negotiations between the Israelis and Palestinians.” Attempts at negotiations have failed for decades, some analysts believe, because of Israeli intransigence.

The bill makes no mention of the reasons why major world bodies are calling for BDS: Israel’s illegal expropriation of Palestinian land for the building of Israeli settlements in breach of the Fourth Geneva Convention, the apartheid nature of Israel’s government and treatment of indigenous Palestinians, and decades of human rights violations.

Rep. Zeldin explained the rationale for extending the reach of current law:

We have witnessed the rise of anti-Semitism and anti-Israel hate throughout the world, in our nation, on college campuses and within the halls of Congress under the guise of the BDS movement, and whether this bigotry is brazen or it’s blatant anti-Semitism deceptively called ‘legitimate’ we must crush it wherever it exists.

However, such efforts to stigmatize BDS as anti-Semitic fail to take into account the objective of the movement. Palestinian academic and writer Haidar Eid points out,

What we want is the implementation of international law; putting an end to the Israeli military occupation of Arab lands occupied in 1967, fighting against the policy of colonization and apartheid as practiced by Israel against the indigenous population of Palestine of 1948, and the return of Palestinian refugees who were ethnically cleaned in 1948…

With pressure imposed by the international community through a BDS campaign similar to the anti-Apartheid campaign which brought Apartheid South Africa to an end, we believe that Israel itself can be pressured to end its multi-tiered system of oppression.

Fifty-eight of the bills’ 59 cosponsors are Republican; Tom Suozzi of New York is the sole Democrat.

An increasing – but not large – number of Democrats have opposed recent attempts to expand the use of punitive measures to stop Israel boycotters. Some of the legislators are concerned that anti-BDS measures encroach on free speech. The American Civil Liberties Union (ACLU) agrees.

European Union legislation requires that all products made in illegal Israeli settlements be labeled as such, to enable consumers to make “informed choices”; the United Nations has created a blacklist of companies that do business in settlements, stating that human rights violations against Palestinians living near settlements are “pervasive and devastating” (the blacklist has not been made public).

Rep. Lee Zeldin is Chairman of the House Republican Israel Caucus, and one of two Jewish Republicans in Congress.

To contact your Representative about this legislation, please go HERE!