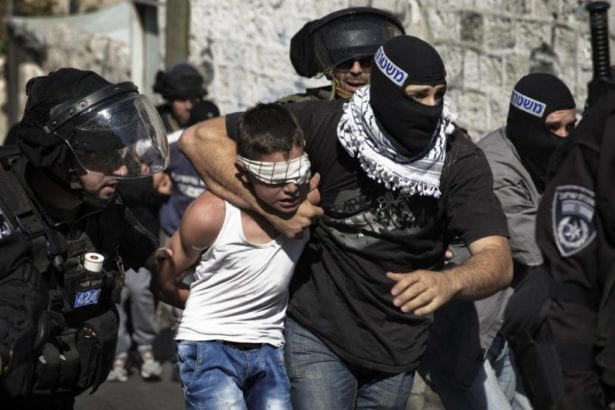 Israeli prison administration transferred 34 Palestinian child prisoners to Damon prison without the presence of their adult representatives. Israel’s systematic use of prisons is part of its brutal occupation of Palestine.

Israeli occupation officials announced that child prisoners would be transferred away from the Ofer prison and separated into cells without the adult prisoner representatives who support them before the prison administration on Saturday, 11 January. In response, the Palestinian Prisoners’ Society noted that this is another attempt to confiscate one of the achievements of Palestinian prisoners that came through long periods of struggle, putting Palestinian children and youth at further risk.

The Prisoners Society noted that, rather than being held in groups, child prisoners would be held two to a cell. It said that this tactic was designed to isolate imprisoned children further from one another and from protective oversight of Palestinian elder prisoners. It also noted that prisoners would launch a series of protests in response, noting that this comes as part of a series of efforts to roll back achievements defending Palestinian prisoners’ rights that has been taking place systematically since 2018.

Specifically, the Israeli prison administration declared that around 60 child prisoners – out of a total of 200 children currently detained by the Israeli occupation. On Sunday evening, they announced that 34 Palestinian children would be transferred to Damon prison on Monday morning, 13 January, without the presence of their adult representatives.

Removing Palestinian child prisoners from the Ofer prison is particularly worrisome because Ofer is the main Israeli prison within the occupied West Bank of Palestine. Despite the Fourth Geneva Convention’s prohibition of the transfer of people under occupation to detention centers and prisons in the occupying power’s territory, the vast majority of Palestinian prisoners are subjected to exactly this type of transfer.

Because the Israeli occupation controls access to these prisons, Palestinians jailed in these prisons cannot receive family visits unless their family members receive a permit from the Israeli occupation authorities. These permits are frequently denied or revoked on spurious or nonexistent grounds of security, leaving jailed Palestinians without family visits. The impact on these denials on Palestinian children and their families is even more profound than its effect on adult prisoners.

This came as the Palestinian Prisoners’ Commission reported that Palestinian children in Ofer prison and their families had faced 54,000 NIS ($15,500 USD) in fines in December 2019 alone. In December 2019, 38 child prisoners entered Ofer prison, where there are currently 82 children imprisoned in two sections. Twenty children were sentenced in December to one week in prison to 23 months, while one child prisoner was ordered jailed without charge or trial under Israeli administrative detention for four months. (Administrative detention orders are indefinitely renewable.)

The Commission noted that these hefty fines are an arbitrary mechanism designed as a form of collective punishment for Palestinian families, in order to further restrict them by burdening them with unaffordable fines.

The No Way to Treat a Child campaign focuses on the effort in the United States to pass H.R. 2407, the “Promoting Human Rights for Palestinian Children Living Under Israeli Military Occupation Act,” a bill prohibiting U.S. taxpayer funding for the military detention of children by any country, including Israel.

Israeli Authorities Summon 3-Year Old Child for Interrogation
Israel has arrested over 50 thousand children since 1967
Testimonies from some of the 8,000 Palestinian children Israel has imprisoned (since 2000)
WATCH: Yes, Israel does arrest children