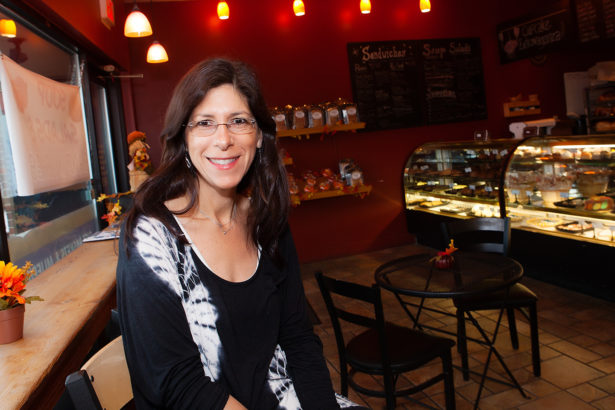 Lisa Lis, philanthropist, from the Jewish Federations of Detroit website.

In a discussion tinged with racism, Jewish power brokers in Detroit have vowed to get Rep Rashida Tlaib (D-MI) out of office at any cost – “for Jewish reasons”…

In recent days a shocking report about powerful Detroit Jews using money to try to defeat Rep. Rashida Tlaib has been circulating on the web; and Tlaib says the attitudes in the story are evidence of “hate” and dehumanization of Palestinians.

Ron Kampeas of the Jewish Telegraphic Agency reported on a gathering of Jewish power brokers in Detroit last week, arranged by a leading Jewish organization, at which they vowed to raise money to get rid of Tlaib because she supports boycott of Israel.

Tlaib is a Muslim woman of color, and Palestinian-American. The commentary at the meeting included race-tinged language, one person saying “the darker one is” the more “right” they’re perceived to be.

This type of hate never succeeds when the truth is on our side. Palestinians *are* dehumanized. Those who want to suppress the truth by trying to discredit me can #bringit. My sidy [grandmother in Palestine] taught me of the days where everyone lived side by side in peace & that is what I will fight for.

Lara Friedman of the Foundation for Middle East Peace points out the views, expressed by “organizational Jewish Dems,” will fulfill the worst ideas people have of Jews:

[I]f someone was speculating that these were the views, rather than reporting what people said publicly, they’d be accused of antisemitism.

Here’s the JTA article. The meeting was semi-official, put together by a branch of the largest Jewish org in the U.S. Kampeas says:

Hy Safran and David Kurzmann of the local Jewish federation set up for me a roundtable with a diverse array of major donors, lay and professional leaders, and folks who have been deeply involved in the community… The round table took place in Jewish federation offices in suburban Bloomfield Hills, but everyone spoke in a personal capacity and not on behalf of any group.

So the leading Jewish org has its fingerprints all over this:

At the Jewish federation round table, there was a consensus: The Palestinian-American freshman in the 13th District [Tlaib] has got to go.

“We in this community will go against Rashida Tlaib,” said Lisa Lis, a philanthropist who is also a contributor to Democratic candidates, and who otherwise during the roundtable was vocal in her criticism of President Donald Trump.

There were nods around the table. I was told that there had already been outreach to Brenda Jones, the Detroit City Council president whom Tlaib defeated in last year’s primary, and who is considering another run. I was also told that pro-Israel folks were already socking away money to target Tlaib…

The powerbrokers believe they can manipulate Detroit’s black community:

The thinking in the room was that the African-American community in the 13th will coalesce around a single candidate — likely Jones — and that candidate would draw pro-Israel support.

An unnamed lay leader in the room criticized the “intersectionality” personified by the Squad, four women of color who are now congresswomen.

“The weaker one is and the darker one is” determines who is “in the right,” the lay leader said of The Squad, an “anti-intellectual” posture that bodes ill for Jews and Israel.

(Writes Lara Friedman, “Thought it couldn’t get uglier? It does… Yes, you read that right: “the darker one is.”)

A rabbi has the sense to tell Kampeas that such an effort aimed at Tlaib would be “catastrophic.”

Rabbi [Alana] Alpert, who was not part of the roundtable, told me that taking aim at Tlaib would be catastrophic for Jewish community relations, and for the issue that more than any other keeps Jewish community leaders awake: keeping younger Jews engaged.

There is plenty of info about how the Israel lobby works in Kampeas’s piece. Michigan Rep. Debbie Dingell has been getting more critical of Israel (supporting McCollum, opposing anti-boycott resolution), but the Jewish community won’t go after her. “Pro-Israel money is rarely directed against surefire winners, because losing would embarrass the pro-Israel community.”

Embarrassment!? Kampeas’s piece has become a huge embarrassment to the Jewish Federations in recent days, thanks in part to Lara Friedman’s tweets. Says Matt Duss of the Bernie Sanders campaign, “Anti-Palestinian/pro-occupation Democrats are planning to try and defeat @RashidaTlaib  (and talking some really racist trash about the Squad). Progressives need get ready to step up and defend.” (Note that Duss does not use the word Jews, which the piece is about.)

Another member of the “Squad,” Rep Ilhan Omar rises to defend Tlaib:

Kampeas has acknowledged a “fraught” reaction to the article:.

I reported that Jewish people for Jewish reasons were raising money to oust two people: Rashida Tlaib and Donald Trump. There was a fraught reaction because of one of the targets: Tlaib.

As for those “Jewish reasons”…  I constantly write about how the Jewish community is changing for the better on Israel and Zionism. Not today. These regressive attitudes are obviously deeply engrained in the American Jewish community, they touch on entitlement and superiority beliefs that are reinforced by wealth, and they’re not going anywhere fast. They have been indoctrinated: “Israel is a rapidly changing, innovative and progressive society with our Jewish Biblical history dating back thousands of years.”

As for the young Israel-critical Jews of IfNotNow, they are very communal, but they are “a radical fringe” even in the pages of the Forward, and of course they don’t even support BDS. No wonder that Jewish Voice for Peace, which is anti-Zionist and endorses BDS, turns to Palestinians such as Tlaib for help/leadership on these issues…

[Editor’s note: Jewish Voice for Peace does not oppose aid to Israel. The spouse of JVP’s executive director works for an Israeli company named “Check Point” that has close ties to the Israeli military. It was founded and is headed up by a former IDF officer from Israel’s notorious Unit 8200.]