You Are Here: Home → Like a Safari: Israeli Troops in Jeeps Hunt a Palestinian Teen and Shoot Him in the Head

Like a Safari: Israeli Troops in Jeeps Hunt a Palestinian Teen and Shoot Him in the Head 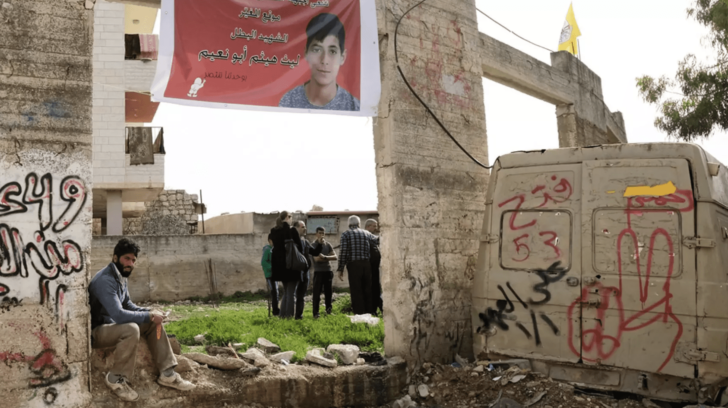 The spot where Laith Abu Naim was killed, in the village of Al-Mughayyir in the West Bank. Credit: Alex Levac

A boy who threw stones at IDF jeeps suffered the punishment of execution by a soldier; it was the third time in recent weeks that soldiers aimed at stone-throwers’ heads.

The killing field of young Laith Abu Naim is an empty lot in the remote village of Al-Mughayyir, north of Ramallah. Someone once planned to build a house here, but got no further than iron rods and a retaining wall. The boy ran for his life between the rods, pursued by two armored Israel Defense Forces jeeps. The chase ended when the door of one of the vehicles opened and a soldier aimed his rifle straight at Laith’s forehead from a range of 20 meters. He fired one bullet, killing the teen – the same way an animal is hunted down and bagged on a safari.

A 16-year-old boy who dreamed of becoming a soccer goalie threw stones at a jeep and suffered the punishment of execution at the hands of a soldier, perhaps to teach him a lesson, perhaps as revenge. The rubber-coated steel bullet struck the exact spot it was aimed at – the boy’s forehead, above his left eye – and had the anticipated result: Laith fell to the ground and died shortly afterward. The outstanding IDF sniper could have aimed at his legs, used tear gas, or tried to stop him in other ways. But he chose, in what seems to be an almost standard pattern in recent weeks in this area, to fire a round directly at the head.

That’s how soldiers shot two young men named Mohammed Tamimi, one from Nabi Saleh, the other from Aboud, wounding both youngsters seriously. The latter is still hospitalized in grave condition in a Ramallah hospital; the former, part of his skull missing, is recovering at home.

Laith Abu Naim now lies in the ground in his village’s cemetery.

The killing field is located in Al-Mughayyir’s main square, which is empty of almost anything, other than a grocery store. The proprietor, 70-year-old Abdel Qader Hajj Mohammed, was an eyewitness to the teen’s killing. Two of Abu Naim’s friends were with him, but they didn’t see the moment of the shooting – they had scrambled onto the dirt path that descends from the square toward the homes of the village. The two, classmates Majid Nasan and Osama Nasan, lean youths of 16, are now giving testimony to a researcher from the International Red Cross, Ashraf Idebis, who has come with a European colleague to investigate the circumstances of the January 30 killing.

The two youths are both wearing blue shirts on which a photograph of their dead friend has been printed, and have keffiyehs draped across their shoulders. The signs of the trauma are still etched on their faces, along with nascent stubble. The desk Laith sat at in the classroom is empty, and his friends have placed his photograph on it, as though he is still with them. On Sunday this week a memorial ceremony was held for him in the schoolyard.

This is a poor village of 4,000, with residents living mostly on what’s left of their farming, surrounded by settlements and settler outposts whose expansion in this region – the Shiloh Valley – has been particularly wild. The neighboring Palestinian locale, Turmus Ayya, is affluent; some of its homes are luxury villas, which are locked up while their owners live in exile in the United States.

Abu Naim’s two friends and the grocery store owner tell a mostly identical story about what happened here on Tuesday of last week.

In the afternoon, a few dozen children and teenagers from Al-Mughayyir walked in the direction of the Allon Road, about a kilometer from the village center, where they threw stones and burned tires. Since U.S. President Donald Trump recognized Jerusalem as Israel’s capital in December, confrontations have erupted almost daily, even in this beleaguered village.

On the day in question, Israeli forces pushed the youngsters back using tear gas, and two jeeps hurtled after them as they retreated back into town. Most of the youths scattered in all directions. Laith remained almost alone in the field facing the jeeps. He had decided to throw one more stone at the vehicles before making his escape. He advanced across the expanse of iron rods toward the jeep that had stopped on the other side, threw his stone and started to run. Hajj Mohammed, from the grocery store, which looks out into the square, relates that one of the soldiers, apparently the one next to the driver, opened the door, aimed his rifle and fired a solitary round.

The hulk of a commercial vehicle that used to belong to Leiman Schlussel, a distributor of sweets in Israel, now painted brown and serving as a falafel stand, is perched in the square. When we visited the site on Monday, the auto’s doors were sealed with locks. Laith apparently tried to take shelter behind the old wreck but didn’t make it.

We go up to the roof of the building where the grocery store is located, some of whose apartments remain unfinished, and observe the arena: the Allon Road, the surrounding settlements and outposts, including Adei Ad and Shvut Rachel, and the vacant construction site with the sprouting iron rods.

The earth is still bloodstained where Abu Naim fell, and littered with shreds of a memorial poster with his picture on it. According to the grocer, the soldier who fired the shot walked over to the dying teen and turned over his body with his foot, apparently to check his condition. The soldiers ordered the grocer to get back into his store and close it. They left without offering the victim any medical assistance. A taxi rushed the youth to the clinic in Turmus Ayya, from where he was taken in a Palestinian ambulance to the Government Hospital in Ramallah.

A large poster bearing Laith’s photo, along with banners of Palestinian organizations now hang on the front wall of the unfinished building, next to the spot where he fell. On the day he was killed, his two friends relate, he left school at about 10 o’clock, as he wasn’t feeling well. They met up with him again around 4 P.M., in the village square. He did not take part in the stone throwing next to the Allon Road, joining the protesters only when they reached the square.

Abu Naim’s grandfather later told us that Laith was on his way to soccer practice in Turmus Ayya. When he left the house that afternoon, he took his training bag with him. The bag hasn’t been found, and at home they think that possibly someone took it as a “souvenir.” 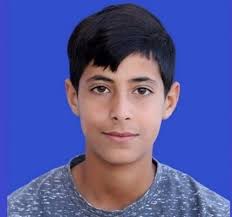 The family’s home is at the edge of the village. Laith’s mother, Nora, died of cancer when she was 26 and Laith was 2. His father, Haitham Abu Naim, remarried and moved to Beit Sira, a village west of Ramallah. Laith was raised by his paternal grandparents Fat’hi and Naama, in the house we are now visiting together with Iyad Hadad, a field researcher from the Israeli human rights organization B’Tselem.

Haitham works for an infrastructure company in Modi’in. He would see Laith every weekend, when the boy would go to Beit Sira. He saw his father for the last time four days before he was killed. On that fateful day last week, Laith’s aunt telephoned his father to say that the boy had been wounded. Haitham rushed to the hospital in Ramallah, where he witnessed the physicians striving in vain to save his son’s life.

“We gave him everything,” says Fat’hi, Laith’s grandfather. Fat’hi studied cooking at Tadmor, the veteran school for hotel management, in Herzliya; the signature of Rehavam Ze’evi, the former IDF general, who was then the minister of tourism (and was assassinated in 2001), is on his graduation certificate. Until recently, Fat’hi, who is 65, worked as a cook in Jerusalem’s Metropole Hotel.

Someone brings Laith’s goalkeeper’s gloves – green and white and much worn from use. He liked to have his picture taken; his father shows us photos. He was a beautiful boy with black hair that spilled onto his forehead. Here he is at the water slide in Al-Ouja. He was the goalkeeper of the school team, a fan of the Barcelona club, and he also liked to swim. Like all the children in this area, the only beach he ever saw was at the Dead Sea.

His grandfather says that whenever clashes broke out in Al-Mughayyir, he would go out to summon the boy home. He didn’t do that last Tuesday, because he thought Laith was at soccer practice.

The IDF Spokesperson’s Unit stated this week, in response to a query from Haaretz: “On January 30, a violent disturbance developed in which about 30 Palestinians took part, burning tires and throwing stones at IDF forces adjacent to the village of Al-Mughayyir. The forces responded with means to disperse demonstrations. The claim that a Palestinian was killed is known. The Military Police have launched an investigation, at the conclusion of which the findings will be conveyed to the military advocate general’s unit.”

Fat’hi, his face a study in dejection, asks: “Is there an army in the world that, after shooting someone, puts a foot on his body? They shot him in cold blood in order to kill him. It was a liquidation, an assassination. They could have arrested him, wounded him – but not killed him. To kill a Palestinian is nothing for them. They have no human feelings. Doesn’t the officer who fired have children? Did he see Laith as a boy like his children? The Israeli soldiers have lost all restraint. Every soldier can kill anyone according to his mood.”

Then they show us more photographs on the father’s cellphone. Here’s Laith smoking a narghile with friends; here’s his funeral. Palestinian President Mahmoud Abbas called and thousands attended, and this has been a source of solace for the family.

For a list of all Palestinians and Israelis who have been killed by the other side since 2000, see this timeline.