You Are Here: Home → Wilkerson says ‘Israel’s security’ was motive for Iraq war– though not in NYT op-ed 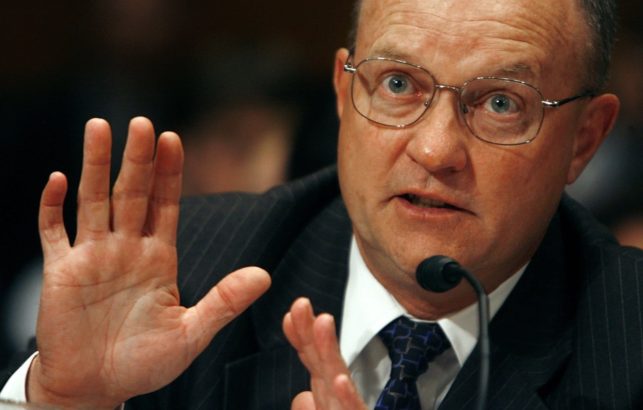 WASHINGTON – JUNE 26: Lawrence Wilkerson, former Chief of Staff to Secretary of State Colin Powell, testifies during a hearing of the Senate Democratic Policy Committee on pre-war intelligence relating to the 2003 invasion of Iraq on Capitol Hill June 26, 2006 in Washington, DC. The committee heard from retired intelligence officials from the Central Intelligence Agency and the State Department. (Photo by Chip Somodevilla/Getty Images)

Retired Colonel Lawrence Wilkerson had a piece in the New York Times on Monday, in which he discussed the parallels between the runup to the Iraq war and the direction things are going with Iran. He identified the source of pro-war analysis as the Foundation for Defense of Democracies – but stopped short of explaining that this organization is “the neoconservative wing of the Israel lobby.”

The next day, in another interview, he was eager to talk about this connection. Does NYT self-censor?

There was an excellent headline in the New York Times two days ago— “I Helped Sell the False Choice of War Once. It’s Happening Again”– on a piece by retired Col. Lawrence Wilkerson.

Wilkerson served as Colin Powell’s chief of staff in the runup to the Iraq disaster, and he wrote that the Secretary of State’s “gravitas” was used by the Bush administration to sell a war that destabilized the Middle East. A similar runup of claims is today being plotted by advocates of war in Iran. In both cases, a Washington braintrust pushes “falsehoods.”

Today, the analysts claiming close ties between Al Qaeda and Iran come from the Foundation for Defense of Democracies, which vehemently opposes the Iran nuclear deal and unabashedly calls for regime change in Iran.

It seems not to matter that 15 of the 19 hijackers on Sept. 11 were Saudis and none were Iranians. Or that, according to the United States intelligence community, of the groups listed as actively hostile to the United States, only one is loosely affiliated with Iran, and Hezbollah doesn’t make the cut. More than ever the Foundation for Defense of Democracies seems like the Pentagon’s Office of Special Plans that pushed falsehoods in support of waging war with Iraq.

It’s good that Wilkerson called out FDD in the NYT, but the curious thing about the op-ed is there is no mention of who this gang is, the neoconservative wing of the Israel lobby. FDD is funded by Bernard Marcus and other giant Israel supporters; “FDD’s chief funders have been drawn almost entirely from American Jews who have a long history of funding pro-Israel organizations,” John Judis wrote.

Just as AEI, Bush’s thinktank for the Iran catastrophe, was funded by Bruce Kovner and Roger Hertog and other Israel backers, who gifted that Pentagon office with neoconservatives Richard Perle and Douglas Feith, who had lately advised Netanyahu.

But openly addressing the Israel lobby is obviously a redline in the New York Times. Because when Lawrence Wilkerson went on the Real News yesterday to discuss his op-ed, he brought up neocons and “Israel’s security” right off the bat!

I think what you’re seeing with people like UN Ambassador Nikki Haley a neoconservative par excellence and other people from the wings as it were, as we had during the march to war with Iraq, Richard Perle for example was one of the most effective of those people from the wings. Like, the FDD, who are pushing what was the agenda originally with regard to Iraq and its being the first state to go. In other words, they wanted to do Syria. They’ve tried that, incidentally and they wanted to do Iran. They wanted to sweep the Middle East for various and sundry reasons, not the least of which was Israel’s security, oil and so forth, but they wanted basically to sweep the Middle East.

Wilkerson said that the “principal reason, longterm reason” that the U.S. was confronting Iran was that (in the words of his interviewer) “Iran acts as a deterrent in some ways to US and Israeli aggression in the region, through primarily its support of Hezbollah and also the Assad government in Syria.”

It is a pity that a man of Wilkerson’s experience and wisdom is not allowed by the New York Times to speak of the Israel interest, when it is at the top of his mind. And a sad reflection of how our mainstream discourse has simply failed to deal with an important truth.

More than twelve years ago, the Atlantic killed the landmark article by Stephen Walt and John Mearsheimer saying that the Israel lobby had pushed the U.S. to invade Iraq, and the article was then published by the London Review of Books, and many establishment voices sought to banish the news by accusing the distinguished authors of anti-Semitism. At that time, Wilkerson expressed support for Walt and Mearsheimer. The paper contained the “blinding flash of the obvious,” he said, and he had taught the scholars’ ideas at two Washington, D.C. universities. (Though Alan Dershowitz came down on him for doing so.)

But we’re always back to Square one on this question. When President Obama said in 2015 that it would be an “abrogation” of his constitutional duty to listen to Israel and renounce the Iran deal, he was accused of endorsing the dual loyalty canard, etc. When he said that Democratic senators were under fundraising pressure to oppose the deal, there were more such accusations. Though Obama was speaking the truth. Round and round we go, and never move forward.