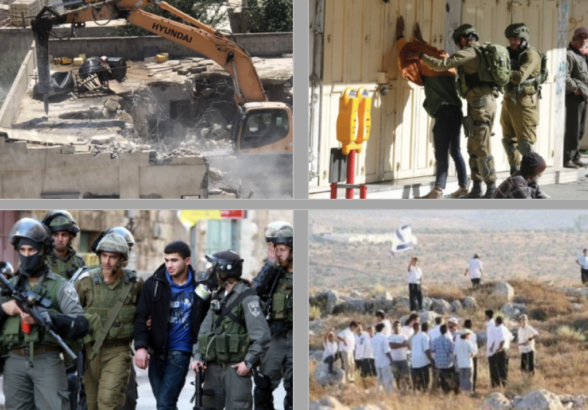 Western media rarely covers the everyday incidents that are part of Israeli occupation.

The lives of Palestinians are constantly disrupted: Israeli military and settlers show up daily to abduct, demolish, harass, or otherwise bring hardship.

IMEMC News reports steadfastly on these often small incidents that add up to intolerable occupation, as Israel touches many lives every day with misfortune.

Below is a round-up of stories from just two days: Wednesday and Thursday, August 21 and 22. 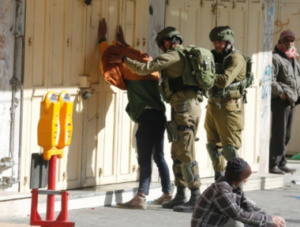 Israeli Forces Abduct/Detain At Least 26 Palestinians, Including Two Women, One Child – In 2 Days

The PPS said the soldiers invaded and ransacked many homes in Jenin governorate, in northern West Bank, and interrogated many Palestinians before abducting five, including former political prisoners.

Thursday, Israeli soldiers abducted five Palestinians [as is their usual practice],  including two women and a guard of the Al-Aqsa Mosque, in occupied East Jerusalem, after dozens of soldiers, police officers and colonialist settlers invaded the courtyards of the holy site.

Wednesday: Israel detained eight Palestinians [as is their usual practice] , including two women and a 13-year-old girl, said the Palestinian Prisoner Society (PPS).

It said soldiers detained the 13-year-old girl from Qalqilia after she was stopped for inspection near a settlement and allegedly a knife was found in her possession.

Israeli also detained Hiba Ahmad Labadi, from Jenin district in the north of the West Bank, upon arrival at Karama/Allenby/King Hussein Bridge crossing coming from Jordan. No reason was given for her detention.

In addition, Israeli security detained four Palestinians from Shufat refugee camp in occupied Jerusalem, including a young woman who was not identified. 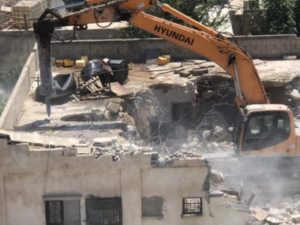 The Wadi Hilweh Information Center in Silwan (Silwanic) has reported that dozens of soldiers, police officers and undercover troops invaded al-Aqaba neighborhood in Beit Hanina [as is their usual practice] and surrounded two homes owned by members of Rajabi family, after closing all roads leading to them.

Silwanic added that the soldiers forced the families out of their homes, and demolished the properties, rendering twelve Palestinians, including three children, homeless.

[The owner of one home explained] that he and his brother have been trying to obtain all needed permits and pay the fines, and even had a hearing at an Israeli court nearly three months ago.

Although no final ruling was made, the family was surprised by the soldiers who invaded their property, forced them out and started demolishing the buildings.

Tuesday: Israeli occupation forces stormed [as is their usual practice] the village of Lqiya, in the Negev desert, and handed out demolition and evacuation notices to 30 buildings and facilities.

Most of the notices were given to the Abu Mutair family, while some belonged to the family of the former Arab member of Knesset, Juma al-Zabarqa.

PNN further reports that this step comes as part of occupation authorities’ efforts to force the residents to relinquish their land, taking advantage of the ongoing housing crisis due to ongoing confiscation and displacement attempts in order to expand settlements.

Israeli forces and staff of the so-called Israeli Municipality of West Jerusalem today ordered the demolition  of over 20 Palestinian structures in al-Matar neighborhood, north of Jerusalem.

Security sources confirmed that Israeli forces and municipality staff stormed Al-Matar neighborhood [as is their usual practice] , opposite to Qalandiya refugee camp, where they handed demolition orders for over 20 Palestinian structures purportedly for being built without licenses.

Meanwhile, Israeli police escorted a bulldozer to the East Jerusalem neighborhood of Beit Hanina, where they heavy machinery demolished a house. [Video here.]

Using the pretext of illegal building, Israel demolishes houses on a regular basis to restrict Palestinian expansion in occupied Jerusalem.

At the same time, the municipality and government build tens of thousands of housing units in illegal settlements in East Jerusalem for Jews with a goal to offset the demographic balance in favor of the Jewish settlers in the occupied city.

Although Palestinians in East Jerusalem, a part of the internationally recognized Palestinian Territory that has been subject to Israeli military occupation since 1967, they are denied their citizenship rights and are instead classified only as “residents” whose permits can be revoked if they move away from the city for more than a few years.

They are also discriminated against in all aspects of life including housing, employment and services, and are unable to access services in the West Bank due to the construction of Israel’s separation wall. 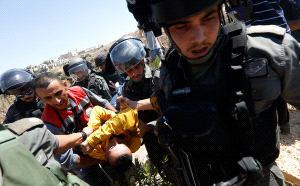 Thursday: Israeli soldiers attacked dozens of nonviolent Palestinian protesters, holding a procession in front of Ofar Israeli prison, west of the central West Bank city of Ramallah, in solidarity with hunger striking detainees, and abducted one of them..[T]he soldiers assaulted many protesters with clubs and batons, and fired gas bombs and concussion grenades at them, causing many injuries. The soldiers also abducted a young man…

[Israeli] soldiers also resorted to the excessive use of force against nonviolent protesters…in occupied Jerusalem. [O]ne of the hunger-striking detainees, Hotheifa Halabiyya, who continues his strike for the fiftieth consecutive day, is facing very serious health conditions, and yet, is subject to constant violations by the soldiers. The detainee is demanding ending his arbitrary Administrative Detention orders, holding him captive without charges of trial.

Israeli soldiers and undercover officers constantly invade his cell, and assault him, in addition to repeatedly searching him, despite his bad health condition…

The Ad-Dameer Prisoner Support and Human Rights Association called on the International Community, and various legal and human rights groups around the world, to intervene and save Hotheifa’s life, especially since he is facing life-threatening health conditions.

It called for released Halabiyya, and all detainees held under the arbitrary and illegal Administrative Detention orders, without charges or trial.

The Popular Front for the Liberation of Palestine (PFLP) has reported that in three Israeli detention facilities, dozens of Palestinian political prisoners have decided to hold a hunger strike for three days as in an initial measure in solidarity with detainee Hotheifa Halabiyya, who continues a hunger strike he started more than 52 days ago.

The PFLP stated that Hotheifa, who is one of its political leaders, is among many hunger striking detainees, held under arbitrary Administrative Detention orders [as is Israel’s usual practice] , without charges or trial.

It added that dozens of Its detained members in the Ramon, Ofar, Nafha and the Negev Detention Camp, will hold a hunger strike for three days starting Thursday…

The PFLP started that the “battle of empty stomachs and strong wills is ongoing until the detainees achieve their rights in the struggle against the illegal Administrative Detention policy, holding them captive without charges or trial.”

It called on the Palestinian people to organize massive solidarity activities to support the detainees, facing ongoing and escalating Israeli violations. 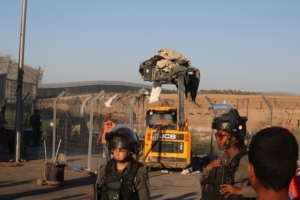 Israeli Forces Devastate Families in the West Bank and Gaza

He reported that the removal of the stands, will result in the vendors and their families losing their sole source of income, estimated in the thousands of dollars.

The stands used to serve hundreds of Palestinian workers who daily cross the military checkpoint to work in Israel and return home in the afternoon, buying their home needs from the vendors.

The occupation army instructed the vendors not to return to that area.

Overnight Wednesday-Thursday: Israeli warplanes attacked several areas in the northern and southern Gaza Strip [as is their usual practice] causing damage but no injuries, according to WAFA correspondent.

It was reported that Israeli jets twice attacked a post on the Sheikh Ijjilin coast, east of Gaza City, causing fire and destruction of the site, as well homes in the area. Another post near Gaza City was also attacked and destroyed.

Flares lit the skies in the south of the Gaza Strip near Khan Younis, before warplanes targeted the posts in the area.

The Israeli army claimed the airstrikes came after two projectiles were fired from Gaza into southern Israel, that fell in open areas, without causing any damage or human casualties. 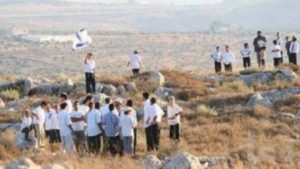 Wednesday: Groups of Israeli settlers broke into Al-Hafira hill [as is their usual practice] , south of the occupied West Bank city of Jenin, and performed Talmudic rituals after spreading out in the area…[T]he settlers have dispersed over the hill, and in the area classified as an archaeological site which is located among the lands of Arraba town, where several Palestinian families reside.

The sources added that the settlers frequently storm Al-Hafira hill and perform multiple Talmudic rituals, on the claim that it’s a Jewish historical site.They indicated that Israeli soldiers [as is their usual practice] accompanied the settlers during the storming, to give them protection.

Jewish settlers planted forest trees on Palestinian land [as is their usual practice] to south of Bethlehem, as a prelude for taking it over…residents of the village were surprised to see the settlers, and under army protection [as is their usual practice] , planting forest trees in a hilly area about 300 meters away from the nearest home in the village, and without any prior notice.

[T]he land amounts to thousands of dunams, and that part of it has been planted with olive trees for decades. [A spokesman] explained that the army [as is their usual practice] had closed most of that area and would often prevent local farmers from reaching their land to cultivate it, even after coordinating their visit to their land with the army.

He said Israel’s intentions in taking over the land were clear when [as is their usual practice] they would not allow farmers to reach it, and after closing a road to the nearby town of Sourif with dirt, since the year 2000, which was later replaced by a metal gate, making movement of Jabah villagers, mainly high school students seeking to reach their schools in Sourif, very difficult and arduous. 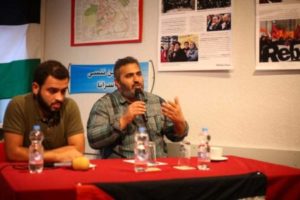 Two events in Berlin on Friday and Saturday, 16 and 17 August, featured speeches by Palestinian writer and activist Khaled Barakat, who was subject to a political ban by the German state preventing him from speaking about Palestine at any public event or activity.