You Are Here: Home → Iyad Burnat: ‘My youngest son has seen nothing but violence’

Iyad Burnat: ‘My youngest son has seen nothing but violence’ 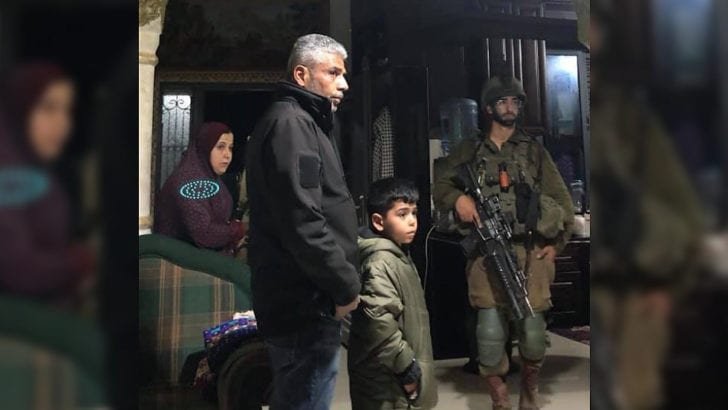 Palestinians are routinely prosecuted in an Israeli military court system that lacks basic and fundamental guarantees of due process in violation of international standards. Children are no exception.

By Robert Inlakesh, reposted from RT

Israeli forces killed a 16-year-old boy, Islam Burnat, from the West Bank village of Bil’in earlier in May and have since “terrorized” local families by raiding their homes and arresting children.

“Two of my sons are now imprisoned and [the Israeli authorities] haven’t even explained why,” Iyad Burnat, a Palestinian non-violent resistance activist, told me in an interview about current events taking place in his village, Bil’in, 12km west of Ramallah.

Burnat, the head of the Bil’in Popular Committee against the Wall, is a well-known activist who I met during my stays in the occupied Palestinian territories. I lived in his family home for two months in 2017 and have since visited him upon returning to the West Bank.

Iyad’s family, as I have personally witnessed on the ground, are routinely targeted by the Israeli forces, most likely due to his active participation in leading international delegations and touring them around Bil’in.

As Israeli-Palestinian tensions escalated earlier this month, large-scale protests took place throughout the West Bank, which triggered a mass campaign of arrests by the Israeli military. During the recent 11-day conflict, at least three Palestinian children were killed in the West Bank, as well as 66 in Gaza.

I asked Iyad how the protests in his village had taken shape and whether he was surprised by the Israeli response.

“In Bil’in, we have had ongoing demonstrations since 2005 – at first, it was every day and after a while once per week – to protest against the wall and settlements. You know, everyone from Bil’in would join this non-violent demonstration, men, women, children, and many internationals even attended,” he explained.

I have covered many of the demonstrations in Bil’in and although violence was regularly used by the Israelis to put down protests, this time it was different. “They were going crazy,” as Hamde Abu Rahma, a local photojournalist covering the protests, put it.

Following these protests, the early morning arrest campaigns began, of which Iyad’s family was one of the primary targets. Israeli forces stormed his home three times recently.

“The first time the Israelis came was on May 17, to arrest Abdul-Khaliq (Iyad’s 21-year-old son), but he wasn’t at home at the time. They came at 3 am and destroyed everything in our house, they told me that if I didn’t give him to them they would shoot and kill him, then return to my home every single night,” said Iyad.

“On the same night my son Mohammed was home, the soldiers took him to a separate room and beat him everywhere on his body, the blood was streaming down his face after the beating,” Iyad added.

I asked him whether the Israeli military had told him what they were searching for, and he said that they gave no reply when he asked them.

“We’ve had many of these invasions of our home, all are similar and we are used to it,”  Iyad said.

The very next day, at a demonstration in the village, young Islam Burnat was shot and killed by an Israeli soldier. Islam was a close relative of Iyad’s. I asked him about what he had witnessed that day.

“The demonstration was to stand with the people of Gaza and demand an end to the killing, to support Jerusalem and Sheikh Jarrah. Islam was one of the children who were peacefully protesting. Then, suddenly, one angry soldier came and started shooting live ammunition, the soldier took aim and shot him in his head,” Iyad said.

“We all knew Islam and my children grew up with him, I remember him as a baby and I remember him from very young going to the non-violent demonstrations,” he said, holding back tears.

The soldiers later returned twice to Iyad’s family home, again raiding it, arresting his 17-year-old son Mohammed during the early hours of May 18.

“Abdul-Khaliq and Mohammed are now in al-Moskobiya prison in Jerusalem, we didn’t hear anything from him until now, the lawyer can’t even visit him and neither can our family,” he said.

Al-Moskobiya detention facility in West Jerusalem is infamous for its alleged underground holding cells and has a reputation for being the worst Israeli prison in terms of the level of torture allegedly used there during interrogations.

“After they took Abdul-Khaliq and Mohammed, my wife and my daughter don’t sleep, the tears haven’t left my wife’s eyes,” says Iyad. “My youngest son Mohyaldeen is growing up seeing nothing but violence. He knows his eldest brother Majd was shot and almost died, his second-eldest brother Abdul-Khaliq was also shot many times and imprisoned when he was only 17-years-old for 13 months. He has seen nothing but violence and even though it’s normal for these things to happen now, he still gets scared, he’s just a little child.”

For both of his sons and three others who have been arrested in the village of Bil’in, Iyad said that the Israeli authorities are asking for a $1,500 fine each. However, even if this is paid in full, there is no way of telling how long they will be kept in administrative detention where they are being held without charge.

Israel’s military court system is well known to be comprised of kangaroo courts, as they have a near 100% conviction rate, meaning that whatever they charge a Palestinian with, they may be sent to jail regardless of whether they are truly guilty or not.

Robert Inlakesh is a political analyst, journalist, and documentary filmmaker currently based in London, UK. He has reported from and lived in the occupied Palestinian territories and currently works with Quds News and Press TV. Director of ‘Steal of the Century: Trump’s Palestine-Israel Catastrophe’.