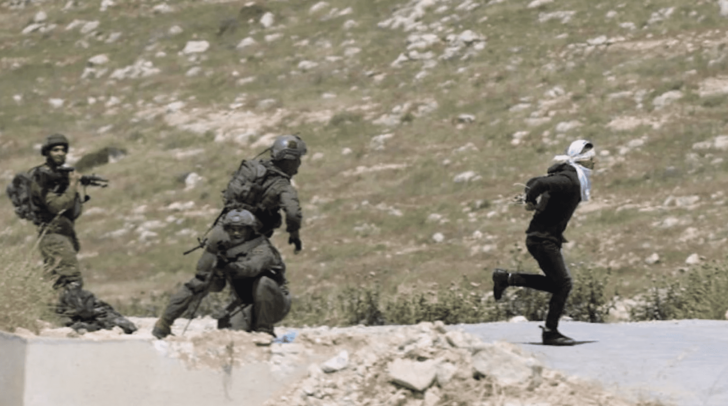 A handcuffed, blindfolded Palestinian minor was detained for suspected stone throwing in the West Bank, shot as he tried to flee; Palestinians who tried to help him were threatened as the teen bled. Israel “will investigate.” (Two reports below)

by Yotam Berger, reposted from Ha’aretz

Israeli soldiers shot on Thursday a restrained Palestinian teenager they had detained for suspected stone-throwing as he was attempting to flee, although he was blindfolded and handcuffed.

The soldiers pursued the detainee near the Palestinian village of Tuqu in the West Bank. At the time of the shooting, the suspect was blindfolded and handcuffed, while he made an attempt to flee.

According to the Palestinians who were present at the scene, the wounded man is being treated at a clinic Beit Jala near Bethlehem and is not under Israeli military supervision.

A video filmed by Palestinians immediately after the incident, however, shows two soldiers in commando uniforms, one holding a sniper rifle, clashing with a large group of Palestinians, including several women, who were attempting to evacuate the wounded man.

One of the soldiers, an officer, is seen dressing the detainee’s wounds with the help of two Palestinian women while another soldier threatens other Palestinians in the area not to come closer or “they’ll get a bullet, I’m not kidding.” The soldier issuing threats holds a sniper rifle and aims a handgun at a Palestinian man standing near him.

The soldier says “[medical] treatment is coming,” while continuing to aim his handgun at a nearby Palestinian. The wounded Palestinian is then taken away by two other Palestinians.

A witness who was present at the scene, Musa Hamid, age 50, said he arrived about 15 minutes after the boy was shot. According to Hamid, the boy is 15 years old. “I told them that we have to help him or else he’ll die,” he said. “Me and another guy took the boy, and others began shooting in the air, we walked about 150 meters toward the IDF forces… They started throwing stones at the soldiers, and the soldiers ran away. We stayed with the boy, and some guys came and took him to get medical treatment. He was seriously wounded in the leg,” he added.

According to the Israeli army spokesperson: “Disturbances have occurred recently involving Israeli cars on the road near the Arab Tuqu,” referring to the Palestinian village, as opposed to the nearby Israeli settlement of Tekoa.

“On Thursday there was an incident, which included massive stone-throwing near IDF forces and Israeli cars on the road, risking the lives of civilians and soldiers. The soldiers responded with riot dispersal methods and arrested one of the demonstrators, who tried to flee after his arrest,” the statement said. “He was detained nearby and shortly thereafter he began to flee from the squad again. The squad immediately began a pursuit, during which the detainee was shot in the lower body. The squad offered the Palestinian first aid immediately. The incident will be investigated,” they added.

However, the Palestinian was in cuffs while he attempted to flee. Thus the procedure of “pursuit” is unclear. Moreover, the footage from the scene shows that he was also blindfolded. A military official confirmed that the Palestinian was cuffed and said he had been evacuated for treatment “jointly” by the army and Palestinians. It is unclear what “joint evacuation” means, since the video shows that he was evacuated by Palestinians over the protests of the soldiers.

‘I Tried to Run and They Shot Me’: Palestinian Teen Recounts Shooting by Israeli Soldiers

Osama Hajajeh, 16, claims he was hit for no apparent reason. The Israeli army refuses to disclose how many bullets were fired at the West Bank village and why

This is how Osama Hajajeh, the 16-year-old Palestinian who was shot by Israeli soldiers on Thursday as he tried to flee while blindfolded and handcuffed, recalls what happened to him.

Hajajeh and his father Ali claim that he was shot twice for no clear reason. A medical source at Al-Hussein Hospital in Beit Jala, where the boy was admitted after undergoing two operations, confirmed to Haaretz that he was wounded in both legs.

Musa Hamid, a resident of the Palestinian West Bank village of Tekoa who witnessed the shooting, said afterward that Hajajeh was shot the first time when he was close to a soldier, and was then shot again when he was tens of meters farther away.