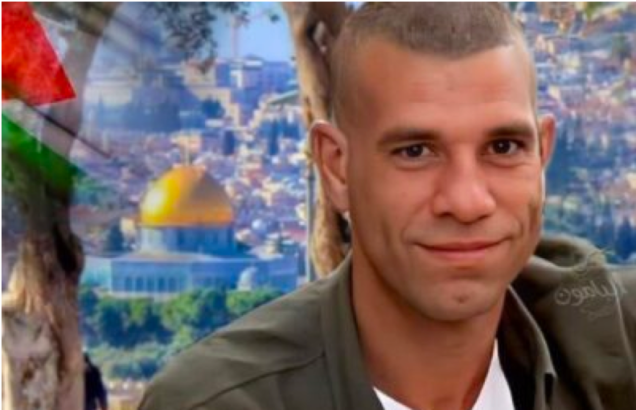 Invading Israeli soldiers shot Mujahed Daoud, 31, in the chest – the 15th Palestinian fatality in October and 171st in 2022. One Israeli (a soldier) has been killed this month, 21 this year.

On Sunday dawn, the Palestinian Ministry of Health announced the death of Mujahed Ahmad Mohammad Daoud, 31, as a result of critical wounds he sustained when the invading Israeli soldiers shot him with live fire in the chest near Salfit.

The Palestinian was seriously injured Saturday afternoon when Israeli soldiers invaded the village of Qarawat Bani Hassan, northwest of Salfit in the central West Bank.

Mujahed was one of 5 civilians who were injured during protests that erupted in Qarawat Bani Hassan between Palestinian youths and the occupation forces on Saturday afternoon.

At the time, the Health Ministry confirmed five were injured and added that two (including Mujahed) suffered life-threatening gunshot wounds to the chest and were rushed to Salfit governmental hospital.

Mujahed was later rushed to the Istishari Arab Hospital in Ramallah due to the seriousness of his injuries, but he succumbed to his wounds.

Local sources said that more than 10 military vehicles stormed the village on Saturday afternoon, leading to massive protests, during which a number of villagers were shot by invading Israeli soldiers.

On Friday night, the soldiers killed Qais Emad Shojaya, 23, from Deir Jarir village east of Ramallah, fired live rounds in the direction of Beit Eil colony, north of Ramallah, before he was shot.

Earlier Friday, an Israeli army sharpshooter killed a Palestinian doctor, Abdullah Al-Ahmad, 43, while trying to render first aid to wounded Palestinians in Jenin, in the northern part of the West Bank.

During the invasion of Jenin, the soldiers also killed Mateen Dabaya, 25, from the Jenin refugee camp and injured many Palestinians, including medics, especially after the army deliberately targeted them and their ambulance.

On Friday dawn, a Palestinian,Mohammad Maher Sa’id(Ghawadra), 17, from the Jenin refugee camp, died from serious wounds he suffered along with his cousin in early September of this year before they were abducted by the soldiers allegedly for being behind an attack targeting a bus transporting Israeli soldier to a military base.

The Palestinian Health Ministry said Israeli soldiers have killed 171 Palestinians this year, 2022, including 15 this month.