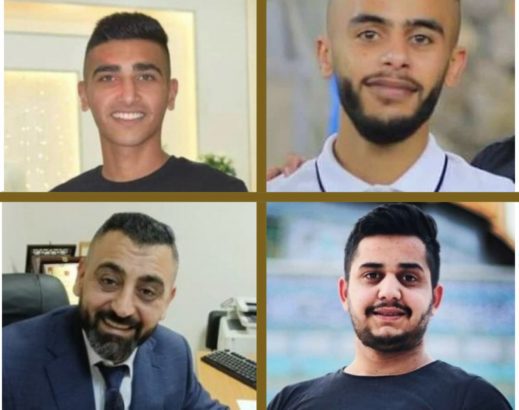 IMEMC reports that Israeli sharpshooters killed 2 Palestinians and injured many others Friday morning during a massive invasion of the occupied Palestinian city of Jenin.

An Israeli sharpshooter shot Dr. Abdullah Al-Ahmad, 43, in the head as he tried to provide medical treatment to another injured Palestinian.

An Israeli sharpshooter also shot Mateen Dabaya, 25, in the head. (Some sources place his age at 20).

Israel has now begun a manhunt for a second Palestinian who was apparently with Shojaya but escaped.

Friday morning, 17-year-old Mohammad Ghawadra died while under detention in an Israeli hospital. He had been injured on September 4th, when he and his cousin allegedly attacked a bus in the West Bank transporting Israeli soldiers to a military post.

According to the Israeli army, they fired and threw Molotov cocktails at the bus, injuring a few people, and one ignited inside the men’s vehicle. Ghawadra sustained burns over 90% of his body.

Some Palestinians occasionally carry out resistance operations against Israeli targets, in response to Israeli land theft, home demolitions, assassinations, decades of occupation, and other forms of oppression.

Much of Palestinian resistance is nonviolent, though mainstream media rarely reports it this way, and frequently fails to report on Israeli violence.

Mainstream media are reporting that the Israeli attacks on Jenin are a response to the killing of an Israeli soldier on October 9, but neglect to report that Israeli forces had killed 20 Palestinians in the previous month and had invaded the West Bank numerous times.

OTHER RECENT NEWS FROM ISRAEL-PALESTINE: