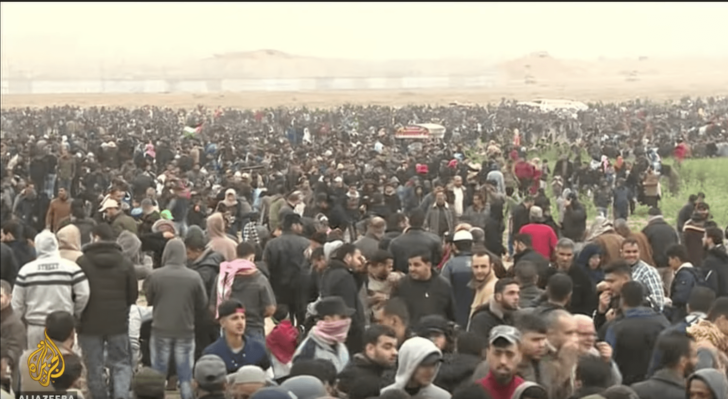 Image above from Al Jazeera video report on protest March 30, 2019 (see below).

Israeli forces used lethal force against hundreds of thousands of Palestinian protesters marking a year since the beginning of the Gaza Great Return March and commemorating Land Day. Among the wounded are 86 children and 29 women. The Palestinian Health Ministry in Gaza reports that Israeli soldiers have killed 266 Palestinians and injured 30398 others since the Return March processions started on March 30, 2018.

Israeli soldiers killed, Saturday, four Palestinians, and injured 316 others, including 14 who suffered life-threatening wounds, during protests across the perimeter fence, in the eastern parts of the Gaza Strip.

On Saturday at night, a Palestinian teen, identified as Bilal Mahmoud Najjar (Abu Jamous), 17, from Bani Soheila near Khan Younis, in southern Gaza Strip, died from serious wounds suffered earlier after the soldiers shot him with live fire.

The Palestinian Health Ministry has reported that, among the wounded are 86 children and 29 women.

Hundreds of thousands of Palestinians gathered on lands near the perimeter fence, marking Palestinian Land Day, and the first anniversary since the beginning of the Great Return March.

Media sources in Gaza said that National Committee for Breaking the Siege has called for a million-person march, marking Land Day, and the first anniversary of the Great Return March, demanding lifting the siege on Gaza, the internationally-guaranteed Right of Return, the liberation of Palestine and independence.

On Saturday evening, the Health Ministry in Gaza said the soldiers killed Tamer Hashem Abu al-Kheir, 17, after shooting him with a live round in the chest, east of Khan Younis, in the southern part of the coastal region.

His death came just hours after the soldiers killed Adham Nidal ‘Amara, 17, who was fatally shot during the processions east of Gaza city.

Mohammad was killed after being struck with a bullet shrapnel in the head, near the perimeter fence, east of Gaza city.

He was from the Sheja’eyya neighborhood in Gaza city; his corpse was moved to the Shifa Medical Center.

It is worth mentioning that Mohammad was injured several times since the beginning of the Great Return March procession a year ago.

Among the injured Palestinians are three medics and seven journalists, while the soldiers also caused damage to three ambulances.

In its latest report, the Health Ministry in Gaza said:

The area of injury in the body:

The Palestinian Health Ministry in the Gaza Strip has reported, Saturday, that Israeli soldiers killed 266 Palestinians, and injured 30398 others, since the Great Return March processions started on March 30, 2018, which also marks Palestinian Land Day.

It said that among the wounded are 3175 children and 1008 women, and added that 136 Palestinians suffered amputations; 122 in the lower limbs, and 14 in the upper limbs.

Among the slain Palestinians are two journalists, identified as Yasser Mortaja, and journalist Ahmad Abu Hussein, in the Gaza Strip, while the soldiers injured dozens of journalists. Read moreThe Ministry also stated that the soldiers killed three medics, identified as Razan Najjar, 22, Mousa Jaber Abu Hassanein, 36, and Abdullah al-Qutati, 20, and injured 665 others, in addition to causing damage to 112 ambulances.

For a list of Palestinians and Israelis killed, with charts and videos, see this Timeline. (This has not yet been updated with the most recent deaths).