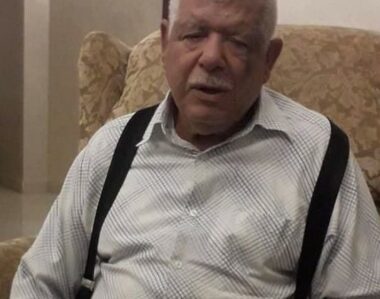 Israeli soldiers invade Palestinian village at midnight; cuff, blindfold, assault 80 year old Omar Abdul-Majid As’ad; then leave his dead body on the ground and leave… He’s an American citizen who lived in the US for many years…

Palestinian medical sources have confirmed, on Wednesday at dawn, that an elderly man was killed after Israeli soldiers detained and repeatedly assaulted him near Ramallah, in the central part of the occupied West Bank. The Mayor of Jaljulia, Fuad Motea’, said the soldiers invaded the village and abducted Omar, before constantly assaulting him in an under-construction home, before leaving him on the ground.

He stated that Palestinian medics rushed to the scene, but were unable to resuscitate the man, before moving his corpse to Palestine Medical Complex in Ramallah.

His nephew, Mohammad, told Palestine TV that several army vehicles invaded the village after midnight, before forcing him out of a car, cuffed and blindfolded him, and started to drag him on the ground before taking him to the under-construction building. He added that after the soldiers repeatedly struck his uncle in the under-construction home, and after realizing that he was dead they just left him on the ground and left the area.

“He was an old man with respiratory issues; the soldiers had no reason to abduct him, let alone to cuff and blindfold him, and to take him to an under-construction home, where they constantly assaulted him, and then just left him there!” Mohammad said.

The Palestinians found his corpse approximately at 4 at dawn in the under-construction building, after the soldiers withdrew from the village.

It is worth mentioning that the soldiers detained several Palestinians during the invasion, and the slain elderly man was the only one who was taken to the building.

The Palestinian News & Info Agency (WAFA) said the slain elderly man has U.S citizenship but cannot enter or leave the West Bank without a Palestinian ID and a Palestinian passport.

All Palestinians with foreign citizenship must enter or leave Palestine using only their Palestinian documents when they cross the Israeli-controlled border terminals.

WAFA added that “Omar was waiting for family reunification papers and a Palestinian ID”, issued by the Palestinian Authority when and if Israel agrees.

Furthermore, Reuters reported that Omar spent many years in the United States, living in Milwaukie – Wisconsin, and returned to the West Bank ten years ago.

On its part, the Washington Post stated that U.S. State Department spokesperson Ned Price said U.S. officials had requested “clarification” from Israel regarding the circumstances that led to his death.

“We support a thorough investigation into the circumstances,” Price told reporters.

This post has been updated from IMEMC’s earlier, shorter report.