You Are Here: Home → Israeli Minister: Israel is investing in Diaspora Jewish education so Jews worldwide will ’embrace Zionism’ 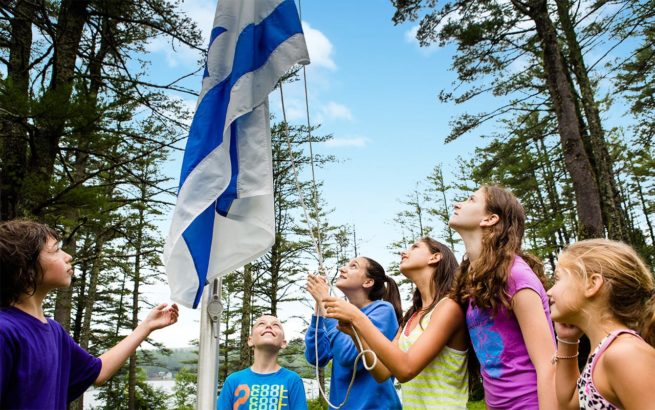 JERUSALEM (JTA) — For decades, world Jewry helped Israel. Organizations gathered and sent funds to the feeble, small state; our Air Force and Navy were formed and trained by Jewish volunteers from around the globe.

As we celebrate our 70th Independence Day, we should thank the previous generations while shifting to a new era, one in which we reverse the roles and Israel spends more time and resources helping the Jews of the world.

Since its inception, Israel has played two roles: First, it is the country of all of its citizens, Jews and non-Jews alike. Second, it is the nation state for all Jews, citizens or not. The Law of Return, which offers immediate citizenship to any Jew interested in living in Israel, is the best example of this idea. As the Jewish homeland, Israel has always felt a sense of responsibility toward the Jews of the world and has acted, often quietly, to safeguard those in need — simply because they are Jews.

Greatest danger to Jews is not “antisemitism”

Sadly, recent events in France and Poland highlight the rise of anti-Semitism and the need to maintain such actions. However, the greatest danger facing the Jewish world in the 21st century is disengagement: Millions of Jews, mainly in North America, are drifting away from Judaism and, as a result, from Israel. Israel cannot ignore this reality. Acting as the home of the Jews, Israel helped Jews in physical danger. Now it is time to help those at risk of losing their connection to Judaism and Israel.

Not long ago, I told our government that Israel ought to drastically increase its investment in promoting Jewish education and identity, multiplying the resources allocated to projects like Mosaic United, Birthright or Masa by at least tenfold. This statement – and my continued policy of investing in education for Diaspora communities – caused people to ask why. “Why should our tax monies go to a child in Dallas or Budapest?”

I have two answers to this question. The first is a one-word answer coming from my kishkes: because. Jews are family, and we need to help our family, whether in Brazil, England or the United States. We help them because we are all Jewish.

The other answer is a far second, but it, too, has its place: Maintaining strong Jewish communities is not only the moral thing to do, it is also a strategic investment by Israel because when you disengage from Judaism, you tend to disengage from Israel. The toughest challenge facing us is the masses of Jews distancing themselves from Judaism and Israel. This distancing has little to do with the disputes between the Diaspora and Israel. The often harsh criticism directed by Diaspora Jews at the Israeli government is being voiced by Jews who are connected and care deeply. Those angry at Israel are those who love Israel and feel they have a stake in the Jewish state.

In the United States, however, they are a minority, not the majority. My main concern is the 75 percent of U.S. Jews, or more, who don’t care enough to be mad at Israel. To be clear, I wish we could resolve all the disagreements between U.S. Jews and the Israeli government, but we have to be realistic. There are serious differences between American and Israeli Jews, including the size and significance of non-Orthodox denominations. This, in turn, influences political representation and resulting public policy. So while it is unlikely we will solve all the issues, we must work hard for an open dialogue based on mutual respect and understanding.

Despite the massive gaps, I refuse to give up. Seeing a Jew drift away from our heritage and traditions, away from our people, hurts me. It is like watching a sibling walk away from the family – I’ll do what I can to stop it and make him return. We are losing millions of Jews, and history will judge our efforts to reverse this dangerous trend. Giving up simply is not an option.

Over the past five years, we have invested unprecedented resources into creating an infrastructure capable of working with Jewish leaders to save a generation of Jews. Through Project Momentum, Campus Engagement and other projects, we will do everything we can to keep our family intact.

As we celebrate Israel’s 70th Independence Day, we find ourselves at a crossroads: One path leads to a utopian situation, the other to an almost dystopian reality. If we make the wrong choice, in 50 years we will find ourselves with a small U.S. Jewish community feeling anything from apathy to disdain toward Israel. They won’t feel connected to us, and we won’t feel connected to them. The right choice, however, will help ensure that 50, 100 and 500 years from today, the world Jewry community will be large, with a strong Jewish identity and open embrace of Zionism.

Such a path, in my vision, also leads to the communities in Israel and the world working together to fulfill the Jewish destiny – doing good and repairing a broken world. This isn’t a simple task; it will take effort and time. But it must be done.

In 2018, unlike 1948, Israel is a strong country, and while we greatly appreciate and welcome the support of Diaspora communities, we no longer depend on it. After 70 years of the Diaspora Jews helping Israel, it is time for Israel to help Diaspora Jews.

Naftali Bennett is Israel’s minister of education and Diaspora affairs. He calls himself “minister of the Jews.” He was instrumental in formulating the new Israel-centric definition of antisemitism that is being inserted in government an entities around the world. His parents grew up in San Francisco and Berkeley.

Below is a video of Bennett posted on the Jewish Women’s Renaissance Project website. JWRP is the U.S. partner of the Momentum trips to Israel. In 2015 the Israeli government allocated $5 million to the JWRP program to bring nonobservant Jewish mothers from abroad to Israel (info here). The $12 million organization is headquartered in Rockville, Maryland.