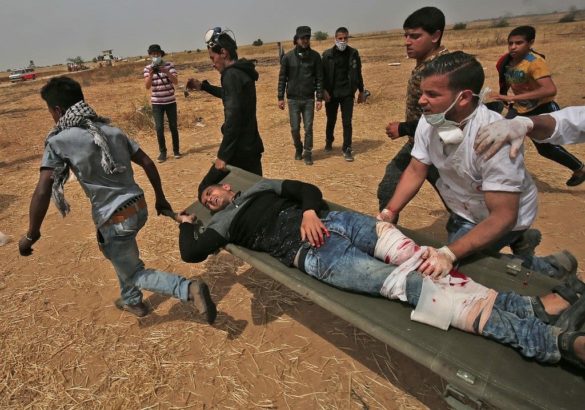 Israel admits that live fire against Palestinian protestors has at times caused death when only serious injury was intended.  Israeli snipers have killed 300 while gradually tweaking their limb-targeting approach. Now they “aim for the ankles,” likely “only” maiming the unarmed demonstrators. The Israeli Supreme Court has backed the lethal open-fire policy from day one.

[Editors’ note: while many leg injuries have indeed resulted in death, a large number of Gazan deaths were due to sharpshooters’ bullets to the head – sometimes the back of the head – the chest, the back, and the abdomen. Only 7 weeks into the now 16-month protest, 500 head and neck injuries were reported. Several Palestinians have also been killed by tear gas canisters shot directly in the head or face.]

Israel’s unlawful open-fire policy during the demonstrations along the Gaza perimeter fence – which were upheld by the Supreme Court – have so far resulted in hundreds of Palestinian deaths and thousands of injuries. Official sources now admit that they were well aware that people were being killed when even the State did not claim that this is justified. Despite this, no-one has taken action to amend the open-fire regulations. Instead, the military continued with its trial-and-error approach, ignoring the fact that human lives were at stake: people whose lives have been taken, and families who have been permanently devastated.

[On 22 July 2019], it emerged that the officials were fully aware, at every stage, of the gulf between their declarations and reality. Carmela Menashe, a reporter for Kan News, reported that the military has now decided to change the open-fire regulations for snipers “after it emerged that firing at the lower limbs above the knee led, in most cases, to death, despite the fact that this was not the objective. Going forward, soldiers have been briefed to shoot below the knee and then at the ankle.” A senior officer at the military’s Counter-Terrorism School stated that the snipers’ objective “is not to kill but to injure, and accordingly one of the lessons learned related to the direction toward which they fire… At first, we told them to shoot at the leg. We saw that this can result in fatalities, so we told them to shoot below the knee, then we fine-tuned the regulations to shooting at the ankle.”

The decision to change the regulations only now, after more than a year during which they led to the deaths of at least 206 Palestinians, including 37 minors, and the injury of thousands, in no way suggests that the military attaches great value to human life. On the contrary, it shows that the military consciously chose not to regard those standing on the other side of the fence as humans. In its naivety, the High Court of Justice approved this practice. Both the military and the Court bear the responsibility for this criminal policy.

In March 2018, thousands of residents of the Gaza Strip began demonstrating along the fence that separates Gaza from Israel, demanding an end to the siege of the Gaza Strip and the implementation of the right of return. From the outset, following the announcement of the first demonstration, Israel portrayed the protests as an existential threat to the state and regarded the participants as dangerous terrorists. As a result of this approach, the military implemented lethal open-fire regulations from the first day of the protests: regulations that are patently unlawful and immoral. As part of this policy, the military permitted the use of live fire against demonstrators on the other side of the fence and posed no danger to anyone, certainly not the armed and well-protected security forces stationed at a considerable distance from them. B’Tselem urged soldiers to refuse to obey these regulations and to refrain from shooting at unarmed protestors.

The regulation were legally challenged at the High Court of Justice. In its response to the petition, the State defended the regulations, declaring that “there can be no doubt regarding their legality.” The State emphasized that the regulations were approved by the Military Advocate General and the Attorney General, and that they permit live fire “solely in order to address violent disturbances that present a clear and present danger to IDF forces or to Israeli civilians.” The State added that “the rules permit precise fire at the legs of a main rioter or main instigator in order to eliminate the danger from the violence disturbance of the peace.” The State further added that “there is an orderly process in place for operational debriefing and implementation of lessons learned;” that “forces have been provided with clarifications and highlights designed to further limit, insofar as possible, the scope of injuries;” and that incidents involving fatalities have been referred for “review by the General Staff Mechanism for Fact-Finding Assessments which investigates exceptional incidents.”

The Court accepted this position verbatim and made no attempt to challenge it. Supreme Court Vice President, Justice Hanan Melcer, held that the regulations permit live fire solely when “there is an immediate, clear and present danger to IDF forces or Israeli civilians,” and allow only “precise fire at the legs of a main rioter or main instigator in order to eliminate the danger from the violence disturbance of the peace, with the goal of eliminating the anticipated imminent danger.”

Supreme Court President Esther Hayut concurred with Justice Melcer, similarly accepting each and every one of the State’s claims regarding the great caution the military exercises in the use of life fire, “in order to minimize as far as possible the potential harm to uninvolved civilians who participate in [the demonstrations].”

In the months since the beginning of the demonstrations, a gap between the State’s claims and the horrifying outcomes of the actual implementation of the unlawful open-fire regulations approved by the High Court grew wider. To date, the military has killed at least 206 Palestinian demonstrators using live fire, 37 of whom were minors under the age of 18. According to figures published by OCHA, more than 7,800 Palestinians have been injured by live fire. According to the World Health Organization, physicians have had to perform amputations in 139 cases – 30 of which involved minors and 121 involved the lower limbs. Moreover, 24 people have been left paralyzed as the result of spinal injuries.

Human rights organizations, including B’Tselem, as well as various media outlets, reported these outcomes in real time. Despite this, officials refused to change the open-fire regulations, persistently repeating that the regulations are legal and proportionate, and that they permit live fire only as a last resort, in the absence of any other alternative.