You Are Here: Home → Israeli who killed Palestinian gets less jail time than Palestinian kids who threw stones; Israeli children dress up as the killer 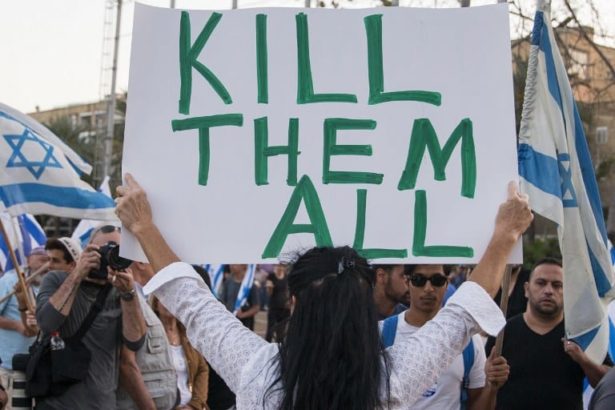 An Israeli soldier who shot a Palestinian rebel dead after he was already incapacitated on the ground has been sentenced to 18 months in prison. The killing took place in the Palestinian city of Hebron in Israeli-occupied West Bank.

[The dead Palestinian’s] father Yusri told reporters … “The sentence he received is less than a Palestinian child gets for throwing stones.”

The family’s comments are not hyperbole. In 2015, Israeli Prime Minister Benjamin Netanyahu’s cabinet established a mandatory minimum penalty of four years in prison for those who “endanger human lives by throwing stones, fire-bombs and explosives”.

… Just a handful of people imprisoned under the new stone-throwing legislation who were handed down longer sentences than Azaria, include five boys from east Jerusalem who were sentenced in March last year for throwing stones at cars:

In addition to the above five, in the same trial, 14-year-old Omar Rani Yaseen received a one-year sentence, and Yazan Hani Ayoub, whose age was not given, was given one year and two months in prison.

The Palestinian had reportedly stabbed an occupying soldier but had already been disarmed and was lying wounded on the ground when he was shot at close range. An onlooker filmed the killing and the video was circulated by Israeli human rights group B’Tselem, which referred to it as an “extrajudicial street killing.”

“The law is clear: shooting to kill is only permitted when the person is endangering the lives of others. Once the danger is over, he or she must not be harmed,” states the B’Tselem website. “Extrajudicial street killings are the direct consequence of inflammatory remarks made by Israeli ministers and officials, augmented by the general public atmosphere of dehumanization.”

On that note, Jerusalem Online reports that some Israeli parents are dressing their children up as the killer, Elor Azaria, for Purim this year:

This year for Purim, many parents are dressing their children up as Elor Azaria, the IDF soldier convicted of manslaughter. The trend is becoming very popular as many people view him as a hero.