You Are Here: Home → Israeli forces gun down Palestinian father & 2 others, another dies of wounds

Israeli forces gun down Palestinian father & 2 others, another dies of wounds 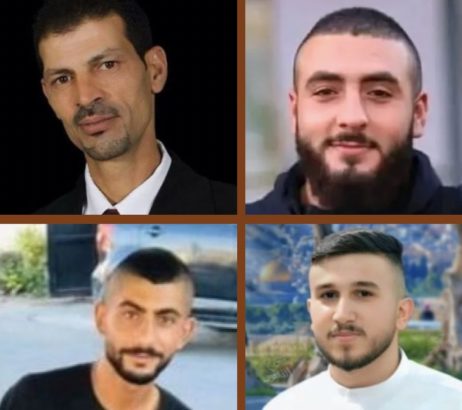 Fifteen days into 2023, thirteen Palestinians have been killed by Israel. The latest victim, Ahmad Kahala, was shot Sunday at point-blank range, and medics were blocked from saving his life.

Israel has one of the most powerful armies in the world.

On Sunday, just one day after three Palestinians had died from Israeli violence, Israeli soldiers killed a Palestinian man at the western entrance of Silwad town, east of Ramallah, in the central West Bank.

Eyewitnesses said the soldiers installed a sudden military roadblock at the entrance of the town before stopping and searching cars.

They added that the soldiers forced a driver, Ahmad Hasan Abdul-Jalil Kahala, 45, out of his car and started assaulting him after a verbal argument ensued.

The eyewitnesses stated that one of the soldiers assaulting the Palestinian shot him from point-blank range.

Palestinian medics rushed to the scene, but the soldiers stopped them, obstructed their efforts to provide him with life-saving first aid, and eventually allowed them to take him away.

The medics rushed Ahmad to Palestine Medical Complex in Ramallah, but he succumbed to his serious wounds.

“Ahmad had no vital signs when we reached him,” Aahed Smerat, one of the medics at the scene, said, “His son called for help, but when we arrived there, the soldiers stopped us and told us the man was under arrest, and later allowed us to take him away.”

The slain man’s sister, Ehman Kahala, said her brother and his son, Qussai, 18, were heading to work at a construction site when the soldiers stopped them at a military roadblock.

“They were assaulting my brother before an argument, and a brief scuffle broke out, and then they [the soldiers] just executed him….” She added.

His sister added that the slain man is a married father of five; two boys and three girls, and one of his daughters will graduate from high school this year.

The Israeli army alleged that the Palestinian “got out of his car, approached the soldiers and attacked them with a knife, in an area where Palestinian protesters were throwing stones at the army.”

Dr. Laila Ghannam, the Governor of Ramallah and Al-Biereh, said Ahmad Kahala’s execution is yet another Israeli crime against the Palestinian people and called on the International Community to act instead of shielding Israel from international prosecution for its ongoing war crimes.

Palestinian Prime Minister, Mohammad Shtayyeh, denounced Ahmad’s killing and said, “the criminals are ongoing with their crimes and violations of International law with impunity,” and called for international protection for the Palestinian people.

Ahmad Kahala is the thirteenth Palestinian, including three children, to be killed by Israeli soldiers in the first fifteen days of this year, 2023.

Also Saturday dawn, Palestinian medical sources at Iben Sina Hospital in Jenin, in the northern part of the occupied West Bank, confirmed the death of Yazan Samer Ja’bari, 19, whom the soldiers shot earlier this month near Jenin.

Yazan was shot on January 2nd when the army invaded the town and detonated the home of two slain Palestinians, Ahmad Ayman ‘Aabed, 23, and Abdul-Rahman Hani ‘Aabed, 22.

The invasion led to massive protests before the soldiers fatally shot Mohammad Samer Houshiyya, 21, from Al-Yamoun, and Fuad Mahmoud Ahmad ‘Aabed, 18, from Kafr Dan, and injured many others, some seriously.

In 2022, the Israeli army killed 224 Palestinians, including 59 from Jenin, in the northern West Bank.

Israel boasts the fourth most powerful army in the world, behind only Russia, The US, and China.