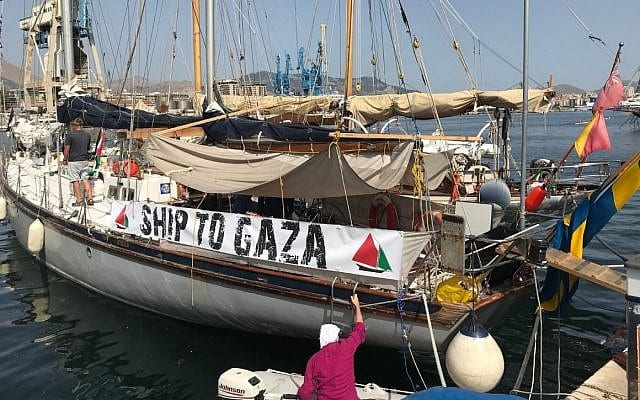 The ‘Freedom,’ one of the boats headed to the Gaza Strip in a flotilla defying Israel’s blockade, July 2018 (screen capture: Press TV/Twitter)

Organizers say a Freedom Flotilla vessel was ‘hijacked’ and towed to Ashdod; IDF confirms it intercepted the boat, says it was in violation of blockade.

Israeli forces attacked one of the Freedom Flotilla ships on Sunday as it was approaching the shores of the besieged Gaza Strip and redirected its sail toward the southern Israeli seaport of Ashdod.

The Freedom Flotilla is a new flotilla made up of four ships, which intend on breaking Israel’s nearly 12-year blockade of the Gaza Strip.

Gaza’s National Committee for Breaking the Siege called upon the residents of Gaza to participate in the official welcoming reception of the Freedom Flotilla ship, which was to take place at noon at the fishermen’s port in Gaza City.

Adham Abu Salima, a spokesperson for the National Committee, confirmed the attack of Israeli forces on the Freedom Flotilla ship and that the committee has lost contact with the flotilla members.

Abu Salima added that 36 solidarity activists, including Israelis and Palestinians, from 15 various countries are onboard of the attacked ship.

Abu Salima also mentioned that before the attack, the flotilla members did not face any obstacles on their way.

One of the Freedom Flotilla ships was previously attacked by Israeli forces in international waters in 2010. The ship, which was carrying aid to Gaza, was attacked while being unarmed, killing 10 pro-Palestinian activists and injuring dozens of other peaceful activists.

Additionally, many attempts have been made throughout the years to draw the public’s attention to the on-going siege of Gaza. From 2008 through 2016, international activists have sailed 31 ships to challenge the Israeli naval blockade of Gaza.

MP Jamal al-Khudari, the head of the popular committee against the siege, condemned Israeli forces for preventing the Freedom Flotilla from reaching Gaza, seizing the ship in international waters, and redirecting it to the Ashdod seaport.

He pointed out in a statement that the solidarity activists aboard the ship sailed towards Gaza peacefully and legally. He added that the ship’s planned arrival in Gaza is aimed at breaking the unjust siege and is a right guaranteed by international law. 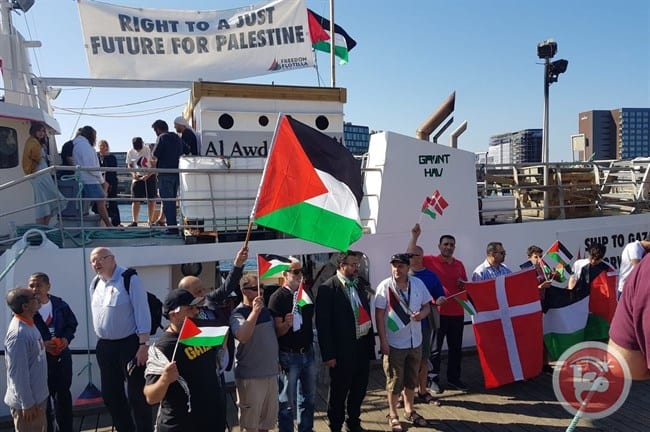 Earlier from the Freedom Flotilla Coalition:

from Right to a Just Future For Palestine

The motor vessel Al Awda (The Return), traveling in international waters towards Palestinian waters, 49 nautical miles from the port in Gaza City, has been contacted by the Israeli Occupation Forces navy and warned. The Israeli navy claims our ship is breaking international law and threatens that they will use “any measures necessary” to stop us. In fact, the only “necessary measures”  would be to end the blockade of Gaza and restore freedom of movement for all Palestinians. At last news from on board, Al Awda maintains her course towards Gaza, where the crew and participants hope to arrive this evening around 21:00 local time.

A number of warships have appeared, so an attack, boarding and capture appear to be imminent, and we anticipate that all communications with the vessel will be lost shortly. Al Awda is sailing under a Norwegian flag, carrying 22 people and a cargo of medical supplies, including #Gauze4Gaza. There are people from 16 nations on board, including human rights supporters, journalists and crew, along with €13,000 worth of medical supplies. The boat itself, a former fishing vessel from Norway, is a gift to Palestinian fishers in Gaza.

Four boats left Scandinavia in mid-May and have since stopped in 28 ports building support for a ‘Just Future for Palestine’, that demands Israel end its ongoing breaches of international law and the twelve-year blockade of Gaza, thereby enabling the only closed port in the Mediterranean to open and for people to have their right to freedom of movement. Al Awda is being followed by the Swedish-flagged yacht Freedom, which is also carrying medical supplies along with people from a number of nations. We anticipate that it will reach a similar area where the IOF attacked Al Awda within the next two days. Two smaller sailing boats that travelled from Scandinavia and sailed through the canal system in Netherlands, Belgium and France visiting inland ports, participated in the mission until Palermo.

“The Freedom Flotilla Coalition calls on the Norwegian Government, the national governments of those aboard Al Awda and the Freedom, other national governments, and relevant international organizations to act immediately.”  said Torstein Dahle of Ship to Gaza Norway, part of the Freedom Flotilla Coalition. “The international community must assume its responsibilities and demand that Israeli authorities ensure the safety of those on board, the speedy delivery of our gifts to the Palestinian people in Gaza, an end to the illegal blockade of Gaza,  and to stop impeding our legal right of innocent passage to Gaza to deliver our gift of much-needed medical supplies”.