You Are Here: Home → Israeli Ambassador to U.S. speaks to American power brokers at exclusive event 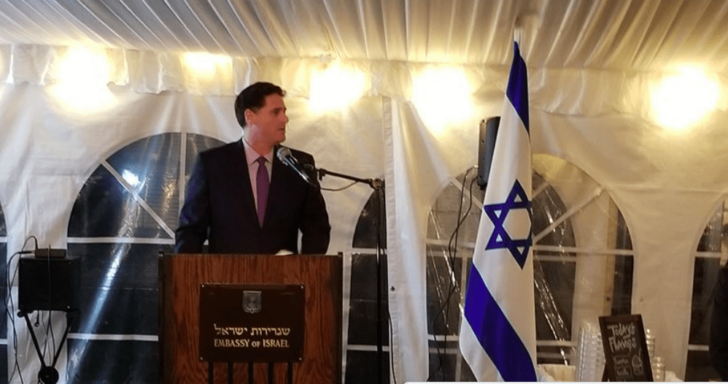 Israel’s Ambassador to the U.S. hosted Jewish leaders, diplomats, journalists and members of Congress for an exclusive Rosh Hashanah reception.

SCENE LAST NIGHT — Israel’s Ambassador to the U.S. Ron Dermer and his wife Rhoda hosted Jewish leaders, diplomats, journalists and members of Congress in a tent on the front lawn of their Chevy Chase, Maryland for an annual Rosh Hashanah reception.

“From my vantage point as Israel’s Ambassador to the United States, it is hard to imagine a better year than the past year,” Dermer began his remarks, highlighting President Trump’s decisions to move the U.S. Embassy to Jerusalem and withdraw from the Iran nuclear deal.

Dermer also paid tribute to the late Senator John McCain, whom he described as “a great friend of Israel and a great champion” of the U.S.-Israel alliance. “One of the things I personally found most admirable about Senator McCain was that he was a fierce fighter who knew the difference between an adversary and an enemy,” Dermer added.

Dermer concluded his remarks with a message of unity: “The Jewish people are a very big tent. In fact, we have always been a very big tent. We began as twelve tribes. And in fundamental ways, we are still many tribes. Look around you. In this tent are people across the political, ideological and religious spectrum. Democrats and Republicans. Liberals and Conservatives. Reform and Orthodox. As for views on Israel, I suspect if I put a ballot box by the door, nearly every party in the Knesset would get a healthy share of the votes. But we should always remember that despite our differences, we are still one people. My hope for the coming year is that as we all continue to fight for what we believe in, we remember that those inside the tent are not enemies. Rest assured, there will always be plenty of enemies outside the tent.” [Pic]