You Are Here: Home → Trump says that U.S. negotiations on Israel-Palestine belong to Jewish community leaders 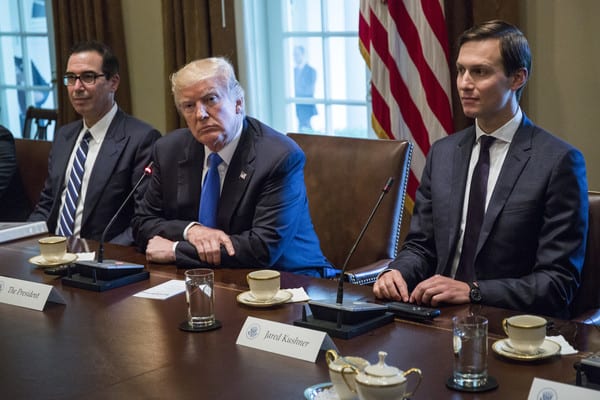 Jewish Insider reports that during Trump’s Rosh Hashanah conference call he “described U.S. Ambassador to Israel, David Friedman, to the group of Jewish leaders as ‘your Ambassador’ and Israel’s peace negotiations with the Palestinians as ‘your negotiations.'”

A TRUMPIAN ROSH HASHANAH CALL — President Donald Trump’s pre-High Holidays conference call with Jewish community leaders and rabbis featured two lawyers, a former U.S. Senator, and a group of Holocaust survivors. During the call, President Trump described U.S. Ambassador to Israel, David Friedman, to the group of Jewish leaders as “your Ambassador” and Israel’s peace negotiations with the Palestinians as “your negotiations.”

Mideast envoy Jason Greenblatt and Treasury Secretary Steven Mnuchin sat around the Resolute Desk in the Oval Office along with the host of the call, Trump’s son-in-law Jared Kushner.

In a brief opening statement, Trump noted his decision to move the U.S. Embassy to Jerusalem and withdraw from the Iran nuclear deal. He also acknowledged a group of Holocaust survivors, who were gathered at the office of New York Assemblyman Dov Hikind in recognition of the move to deport former Nazi guard Jakiw Palij to Germany.

The President then invited Friedman to deliver an update on the expansion of the new embassy in Jerusalem. “We have about 150 people working there already. We’re beginning phase two of the construction period, which is beginning in a week or two,” Friedman said. “And we will roughly double the size by June of 2019.” Friedman also noted that the embassy has become a “major tourist site” in Israel. “People come there almost every day. People just pull up their cars in front of the embassy, they get out, take pictures. I see some people praying there. I have actually seen many people crying there,” he said.

Opening up the call for questions, Trump gave Harvard law professor Alan Dershowitz — who he described as a “terrific gentleman and a great lawyer” — the first opportunity to pose a question. “Should the Jewish community be optimistic that you could help bring about a peaceful resolution to the conflict that we all pray for all the time?” Dershowitz asked, after praising Trump for moving the Embassy to Jerusalem. “I think the answer to that is a very strong yes — you should be,” Trump responded. RJC [Republican Jewish Coalition] National Chairman Norm Coleman followed with a question about the Iran deal.

The Forward reports that the invited audience “was expanded beyond rabbinic groups to include hawkish advocacy organizations like the RJC, the Zionist Organization of America and the Simon Wiesenthal Center. This year’s invite list included for the first time the Coalition for Jewish Values, a right-wing Orthodox rabbinic group. The CJV’s press release said that several other organizations were also invited to participate for the first time.” [CJV says it represents 1,000 rabbis nationwide.]

“…I will now take a moment to ask Ambassador Friedman to say a few words. He’s done a fantastic job as your ambassador.”