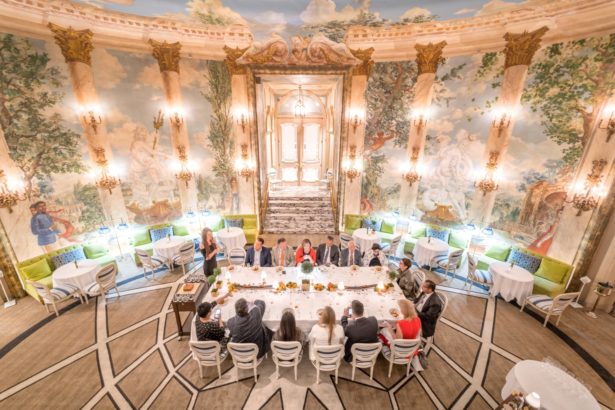 Private dining room in Pierre New York, site of exclusive briefing by Trump peace time for Jewish business and communal leaders. File photo from hotel website, which states: “At The Pierre, we offer private dining in mesmeric settings, with handcrafted menus and discreet service. Engage all your senses with our personalised dining experiences.”

Haim Saban (Democratic donor) and Paul Singer (Republican donor) convened a private dinner featuring U.S. Ambassador to the UN Nikki Haley, Jared Kushner, and Jason Greenblatt. The kosher-catered dinner, held in a private room at the Pierre Hotel on the Upper East Side, was for senior administration officials to discuss their emerging Israeli-Palestinian peace plan with powerful Jewish business and communal leaders…

“Ahead of the United Nations General Assembly, Haim Saban and Paul Singer convened a private dinner on Tuesday evening in New York City featuring U.S. Ambassador to the UN Nikki Haley, Jared Kushner, and Jason Greenblatt [Trump’s Special Representative for International Negotiations]. The kosher-catered dinner, held in a private room at the Pierre Hotel on the Upper East Side, brought together a politically diverse group of twenty Jewish business and communal leaders.

“According to sources familiar with the event, the gathering was an opportunity for the senior administration officials to discuss their emerging plans for an Israeli-Palestinian peace process. It isn’t clear what, if any, specific details from their plans were shared during the two-hour-long dinner. However, winning support from influential leaders across the political spectrum has clearly been a priority for the administration. In recent weeks, Greenblatt has been spending a significant portion of his time briefing diplomats and Jewish groups in New York. On Tuesday alone, Greenblatt discussed the peace process at three separate events, including the dinner and two forums.

Israel’s Jerusalem Post newspaper reports: “Speculation has been high that the US could unveil its peace plan, which Trump has referred to as “the deal of the century,” at the UN in New York.

“Haley said that the peace plan is getting close but won’t be unveiled during the 73rd opening session of the United Nations General Assembly later this month.

“She added that she had read the very detailed proposal which was put together by US envoys Jared Kushner and Jason Greenblatt who have engaged with many world leader in the process of its preparation.”

Greenblatt, who was educated at Yeshiva Dov Revel, the Marsha Stern Talmudical Academy, and Yeshiva University, was named by Trump in January 2017 to be “Assistant to the President and Special Representative for International Negotiations.”

Greenblatt has stated that Israeli Jewish-only settlements in the West Bank on confiscated Palestinian land are permissible, a view that an Israeli newspaper pointed out was “180 degrees different from that of past administrations, either Democrat or Republican.”

Greenblatt has been accused of assuming the role of an Israeli spokesperson who repeats Israeli talking points.

Below are some of Greenblatt’s tweets about the briefings:

It was an honor to attend a bi-partisan dinner last night with @nikkihaley & @jaredkushner co-hosted by Haim Saban & Paul Singer. We discussed the Middle East, the U.S.-Israel relationship & our peace efforts. We thank Haim & Paul & their guests for the important dialogue. pic.twitter.com/dwnB6kHHd8 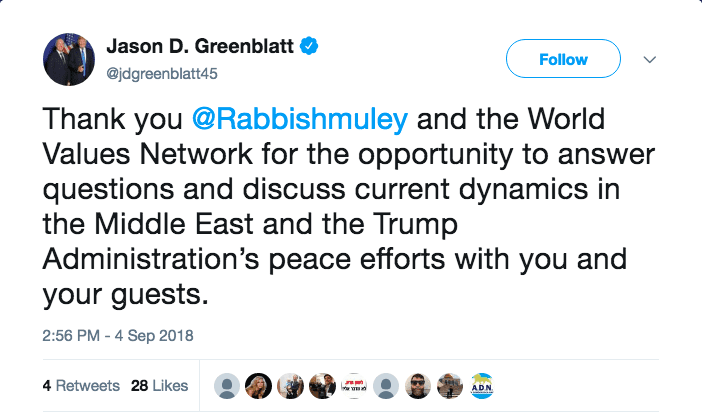 Thank you @AIPAC for the opportunity to answer your questions tonight. It was a pleasure to speak with you about the US-Israel relationship, recent events in the Middle East, and the Administration’s peace efforts.