You Are Here: Home → Israel: “father isn’t sick enough” for son to travel from Gaza to West Bank 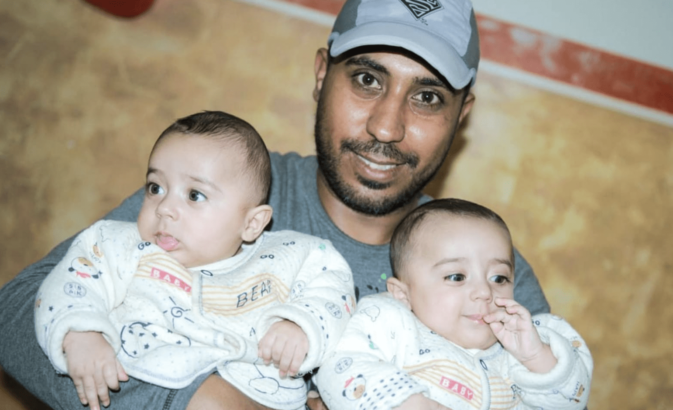 Shadi with his children. Credit: Gisha Legal Center for Freedom of Movement

Mohammed had a stroke and needs care, but Israel won’t allow his son out of Gaza to visit him. According to Israeli criteria, travel permits are only granted if first-degree relatives are dead or dying.

One of Mohammed’s sons was killed by Hamas’ military wing, Iz al-Din al-Qassam, in October 2006 in Gaza. A large martyr’s poster of his son, which includes a double portrait of him smiling, hangs on a living room wall in Mohammed’s small apartment in the West Bank city of Beitunia, next to a large yellow Fatah flag and two photographs of Yasser Arafat. The son, who was 24, was a member of the presidential guards unit and was killed by a bullet fired from a building opposite his father’s office.

Mohammed moved to the West Bank in 2009, and with the authorization of the Israeli authorities his address was amended on his ID card from Gaza to the West Bank. He also received exit permits to Israel.

Mohammed’s wife recounts these details as he lies on a couch covered in blankets. Sometimes his eyes are shut and sometimes they open and he listens to the conversation.

Mohammed, 57, speaks with difficulty because he suffered a stroke in June. Since then, requests by his eldest son Shadi for an Israeli permit to leave Gaza and visit him have been rejected. Mohammed’s condition isn’t dire enough for him to be visited, according to the reply from the Israeli Coordination and Liaison Office, headed by Col. Iyad Sarhan.

What is true is true: Mohammed isn’t dead, nor is he dying. He’s fully conscious. When the sun is out he’s brought out into the yard, which is full of plants. He needs to be lifted and taken to the bathroom and shower. His wife suffers from a slipped disc, so for lifting him she needs the help of two cousins who live in a nearby building.

“We have no family but them, nor do we have any friends. It’s not like in Gaza where everyone helps you. Here in the West Bank there isn’t the warmth you have in Gaza,” she says, uttering the same words you hear from many Gazans living in the West Bank.

During the conversation, Mohammed suddenly exerts himself and says in Hebrew, his eyes glistening with longing for bygone days: “I grew up in Israel.”

Did you work in Israel, he’s asked, and he nods and says, “From the age of 17, in restaurants and textile plants.” After a pause he adds: “There’s nobody on Dizengoff who doesn’t know me.” Then he asks, “What ethnic group you belong to?”

So many workdays missed

While refusing to be photographed, pointing to his head, we put together a response of words, clarifications and nods. If he could speak more easily, he’d be able to convince why it’s best we didn’t take his picture.

Mohammed doesn’t use a walker because his right hand is too “heavy” to hold it, his wife says. The right side of his body is weak. “He’s usually in one of two situations: either lying on his back or lying on his left side,” she says.

She brings the food to the sofa and cuts it up for him, and he eats it with his left hand. She gives him insulin shots for his diabetes. Among the drugs he’s taking are blood thinners to prevent another stroke. The physiotherapist comes when there’s enough money to pay him.

His wife works for the Palestinian Authority’s National Security in Ramallah. “And I’m embarrassed missing so many workdays, whether for me or for him,” she says.

That’s why she has taken their small daughter out of kindergarten and leaves her home to be with her father, so that he’s not alone and she can call for help if something happens. She can’t take her other daughter – who’s 12 and has a different father – out of school.

On the phone from Gaza, Shadi, the eldest son, says: “That’s exactly why I’m needed there, at his side. Not to see him die, God forbid, but to help him and make it easier for his wife for a few days. As the oldest son it’s also my responsibility to clarify all sorts of family matters with him, to make decisions together. There’s always the fear that his condition could worsen.”

Although eight months have passed since his stroke, the liaison office officials insist on their refusal not to let Shadi meet with his father.

It’s not an unusual case. On the contrary. A follow-up on the bureaucracy behind the exit permit refusals shows an important aspect of Israeli society, whose best officers and legal officials have developed a system of denials that ignores basic human and family needs. Since a 2007 decision by then-Prime Minister Ehud Olmert and then-Defense Minister Ehud Barak to totally lock Gazans behind a wall, the criteria for exit and entry permits for a primary relative’s illness remain: only if there’s a death or a funeral, or if someone is dying. If the ill person in not a primary relative there’s no chance to see them.

Concern for someone who is ill or needs assistance, or the desire of a woman to hug her mother aren’t considered “criteria” justifying visits. The blockade has been softened a bit over the years, particularly regarding the bringing in of food, raw materials and consumer goods to Gaza, but nothing concerning personal relations or a human touch.

‘The documents are irrelevant’

In response to Haaretz, the spokesman for the Coordinator of Government Activities in the Territories, headed by Maj. Gen. Kamil Abu Rokon, wrote: “The policy of issuing permits for visiting a person who is ill is for primary relatives, when someone is seriously ill and there is a fear for their life or a need for extended hospitalization.”

The spokesman added: “After an examination of all the medical documents by professionals at the Gaza coordinator’s office, it turns out that this patient is not in a life-threatening situation or in need of extended hospitalization, or in need of any hospitalization. There is no evidence of any medical monitoring, support or home care by any medical team. In the absence of any meisraeli high court of justice

dical documents displaying any of the necessary criteria, no room has been found for changing the decision to deny the request.”

Shadi submitted the first request for an exit permit from Gaza on June 10, a few days after his father’s stroke, while his father was in intensive care in Ramallah. But the liaison office didn’t respond. On July 24, the Gisha Legal Center for Freedom of Movement wrote to the Coordination and Liaison Office demanding to know the reason for the delay.

A month later, on August 26, a first response arrived from the office: The documents are irrelevant and do not meet any of the criteria. Gisha insisted otherwise. It sent another request for a permit and asked: In the event of a refusal, who would make that decision and would that person have any medical training? The response received in November was that the reasons had to do with “security” and of course couldn’t be further discussed.

Shadi, a father of minors who makes a living selling cellphone accessories, was amazed to hear of the security suspicions against him. Gisha’s lawyers turned his shock into a petition to the High Court of Justice. Amid this pressure, he was called for two interrogations by the Shin Bet security service and was asked to bring medical documents to justify his request to see his father. Neither interrogation found security reasons to prevent him from leaving.

But attorney Michal Danieli, an assistant at the High Court department of the State Prosecutor’s Office, said the refusal for his failure to meet the criteria still stood. This means that Danieli, too, thinks that since Shadi’s father is not dead or dying, there is no reason to visit him or help his recovery process.

The result of the petition: Shadi submitted additional medical documents to prove that his father is under long-term care. The documents were filed, and the liaison office stood by its position. A response from January 21 signed by an ombudsman officer, Lt. Roni Vaknin, says: “There was nothing found in the documents that should change the decision to deny the request to visit the patient, for reasons of failure to meet the criteria.”

Attorney Moria Friedman Sharir of Gisha has written a new appeal, this time to a district court handling administrative matters because of new legislation limiting Palestinians’ access to the High Court.

A hearing on the request to let the son visit his ill father has been set for March 3.

Amira Hass is the Haaretz correspondent for the Occupied Territories.