You Are Here: Home → Yemen’s War Is a Mercenary Heaven. Are Israelis Reaping the Profits?

Yemen’s War Is a Mercenary Heaven. Are Israelis Reaping the Profits? 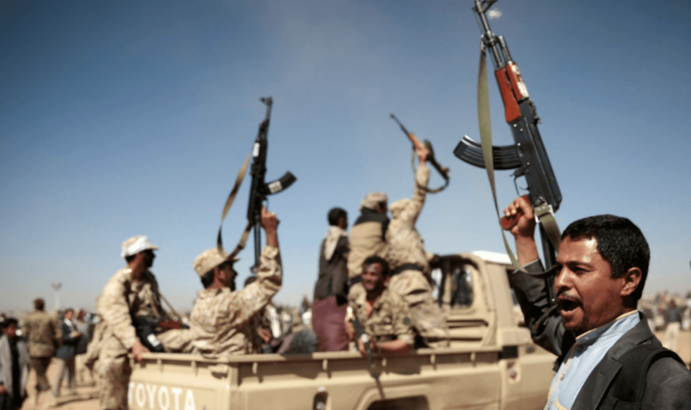 Israeli fingerprints are all over the war in Yemen, from cyber spyware to hitmen; Americans are also deeply involved, as well as individuals and companies from other countries…

“If Iran tries to block the Bab al-Mandab strait, I’m sure it will find itself facing an international coalition determined to prevent it. This coalition will include all Israel’s army branches as well,” declared Benjamin Netanyahu in August, following Iran’s threats against American sanctions.

Such a coalition had already been set up in 2015 by Saudi Arabia, who partnered with the United Arab Emirates, Bahrain, Egypt and Pakistan. Israel is also an unofficial partner. Israeli cyber companies, gun traders, terror-warfare instructors and even paid hitmen operated by an Israeli-owned company are partners to the war in Yemen.

In September, London-based Al-Khaleej Online published a long article about Israel’s involvement in training Colombian and Nepalese combatants, who were recruited by the UAE for the war in Yemen. The report cites sources in a U.S. House Intelligence Committee who said the foreign fighers’ recruiter was Mohammed Dahlan, who was a member of Fatah’s central committee and head of intelligence in Gaza. Dahlan was ousted from Fatah in 2011 and later moved to the UAE, where he became the advisor of the crown prince and the liaison and mediator between the UAE security forces and Israel.

Many Israeli contributions to Yemen war

The report also says that Israel set up special training bases in the Negev, where the mercenaries were trained by Israeli combatants. Dahlan occasionally visited those camps, in which the UAE flag was hoisted.

The mercenaries later took part in the war on the port town Hodeidah and other fighting zones in Yemen.

Many reports have been written about Israeli companies like the NSO group, which is suspected of selling Saudi Arabia Pegasus spyware accused of helping trace and survey Saudi journalist Jamal Khashoggi, or the AGT company owned by the Israeli businessman Mati Kochavi, which in 2007 won the $6 billion bid to set up surveillance and monitoring systems in Abu Dhabi. But what remains a mystery is to what extent Israeli technology served the fighting forces in Yemen.

Another company, Spearhead Operations Group, which was set up by Israeli Avraham Golan and is registered in the United States, was responsible for assassinating Yemenite clergyman Anssaf Ali Mayo in December 2015. Mayo was one of the leaders of the Yemeni reform party, which is affiliated to the Muslim Brotherhood. The latter is classified in the UAE as a terror organization. Golan confirmed to BuzzFeed in October that “there was a plan for targeted assassinations in Yemen. I ran it. We did it. The plan was under the UAE auspices as part of the Arab coalition.”

Golan added that during the months his company was active in Yemen he was in charge of several “high profile” assassinations and that the United States needs a murder plan based on the model he set up. According to BuzzFeed, those who actually carried out the assassinations were apparently former combatants in top American commandos.

Israelis aren’t the only ones selling military services to the UAE and Saudi Arabia to go to the war in Yemen. Private American companies, senior officers and ex-CIA agents found their bonanza in these two states, just as private companies made a huge fortune out of “military” services they provided the Iraqi government after the occupation. These services include active warfare and intelligence gathering as well as commanding mercenary units or combatant units from Saudi Arabia and UAE. For example, the former American general Stephen Toumajan is serving as the UAE’s commander of the Joint Aviation Command and was the chief of a combat helicopter unit that fought in Yemen.

Toumajan isn’t the American security agencies’ subcontractor, he wears the UAE air force uniform and in interviews he speaks of himself as a general in the state’s army. Toumajan represents a new stage in the privatization of the war in Yemen and in other states in which the United States is involved but isn’t taking part in the battles.

A foreign partnership in the armies of Arab states isn’t new. Pakistani pilots for example fly Saudi planes, the Presidential Guard commander in the UAE is Australian general Mike Hindmarsh. Companies from all over the world including Israel run advanced intelligence systems, so the term “mercenaries” has evolved from armed combatant units from poor countries who come to improve their standard of living to a role filled with extensive activities including setting up combat units, commanding them, planning war moves, purchasing equipment and managing budgets.

The difference between sending combatants who serve in the armies of foreign countries, like Iranian and Russian forces in Syria, or forces of the Western coalition fighting in Afghanistan, and mercenaries who are recruited privately, is blurry. Regular forces acting in foreign states are subjected to the laws of the state that sends them, compared to mercenaries, who act at the instructions of the recruiting state. But this is also the problem with employing them.

These forces need a legal permit, which is given after a parliamentary debate or by legislation, and then the state can decide on the kind of fighting its forces will be involved in and the length of time they’ll stay on foreign soil. In contrast, mercenaries, whether combatants or in air conditioned high tech companies in Dubai or Riyadh, are subject only to the terms of their employment contract, unless they pass information to a foreign state without a permit.

An example for this is the United States House of Representatives’ decision to ban the involvement of U.S. troops in the war in Yemen (although intelligence cooperation is still permitted). This is a declarative decision intended to convey to President Donald Trump and the Saudi crown prince that the U.S. no longer supports this war, which has generated one of the greatest humanitarian tragedies, despite its description as a struggle against Iran.

The United States doesn’t have military forces that are active in the war in Yemen, but an “army” of mercenaries, which includes numerous Americans, may continue to act unhindered as long as it is financed by Arab states.

The senior mercenaries have not ruled out the need for the cannon fodder recruited by the fighting states from the ever available stock in poor states. Many Yemenites have avoided joining their state’s army to fight the Houthi insurgents, they prefer to be mercenaries of the Saudi army for the same cause. Much of it could be due to wages as a soldier in the Yemeni army earns some $100 a month on average, whereas a mercenary’s monthly wage is $350-$500 plus some $130 for every attack. Columbian combatants earn three or four times what they would make in their army, while Afghan combatants who are recruited from the thousands of Afghan refugees in Iran to fight in Syria are assured a $250 wage each month. More importantly, they may be eligible for Iranian citizenship along with their families.

The most expensive mercenaries are from elite American units like the Navy Seals, army rangers and the Marines. According to the silentprofessionals.org site, a professional with training as a sniper who gets a job in Afghanistan or Iraq can make some $544 a day plus perks and bonuses. Yemenites or Columbians cannot get this coveted post even if they are gifted snipers, as the key requirement is having an American citizenship. However this doesn’t mean private companies won’t agree to employ talented snipers from other states, after all, the supply and demand principle works in this market too.

Mercenaries may be private people or companies that don’t represent governments, but often the states they come from are suspected of initiating or at least turning a blind eye to their activity. The Israeli Defense Ministry or Mossad may claim people who served in their ranks and are now private contractors of the UAE or South American states are not working in Israel’s name, and as long as they don’t break the laws of their host state there is no reason to put them on trial. But it is doubtful whether anyone would accept this argument when such a mercenary, whether an independent contractor or a private company, acts in foreign states in a way that serves Israel’s interests, such as the war against Iran. Thus there are those who argue that if Israel cannot allow anyone to pass information and technology directly to Saudi Arabia while being recruited, they can wait a few months until being discharged and then proceed privately, for big money.