You Are Here: Home → Israel: democracy or apartheid state?

A bloodied Israeli flag hangs on the main building at the University of Cape Town during Israel-Apartheid Week 2018. (photo credit: SAUJS/FACEBOOK)

Racism was part of the birth of the state of Israel; apartheid is part of its fabric. Nelson Mandela agreed. Palestinians struggle for equality, as do people of color (both Jewish and non-Jewish).

I was inspired to write this article in light of recent political events in Britain. For some time there has been an Anti-Semitism in the Labour party ‘scandal’ which has intensified in recent months after Labour’s strong showing at the last General election under Jeremy Corbyn. There have been near-daily press reports accusing Jeremy Corbyn of Anti-Semitism, and he has put under a level of pressure that we have rarely seen in British Politics.

The Labour NEC (National Executive Committee) was asked to adopt the International Holocaust Remembrance Alliance’s definition of Anti-Semitism in full in-order to demonstrate action on the matter. Last week the NEC bowed to the pressure and did precisely that.  The IHRA code offers a definition of Anti-Semitism and 11 examples of what constitutes Anti-Semitism. Many legal experts including the very author of the text have raised serious reservations about the code arguing, amongst other things, that it limits freedom of speech.

I am inclined to agree, for me the IHRA code is a flawed and contradictory document which will be very problematic to enforce. I feel that whilst there is indeed some Anti-Semitism in Labour (can prejudice ever be entirely eradicated?) the whole issue is primarily a witch-hunt against Jeremy Corbyn because there is a realisation in many quarters that for the first time in many years we may have a Prime Minister in this country who has Pro-Palestinian sympathies.

This view is reinforced by a four-part documentary made by Al Jazeera (The Lobby) which uncovers a very sophisticated campaign led by the Ministry of Strategic Affairs in Israel and the Israeli embassy in the UK to vilify, demonise and silence voices critical of Israel in the Labour Party. One of the more controversial examples in the code argues it is Anti-Semitic to see Israel as a racist endeavour. It is this supposition that I feel warrants further examination.

Modern Israel was founded on Zionist principles. There are varying definitions of Zionism, but in a nutshell, it is as the Oxford English dictionary states ‘A movement for the re-establishment of a Jewish nationhood in Palestine’. It is this very desire to create a Jewish state that led to the expulsion and ethnic cleansing of 750,000 Palestinian’s between 1947-1949. Zionist forces ethnically cleansed and destroyed approximately 530 Palestinian villages and cities, killed circa 15,000 Palestinians and committed close to 70 massacres.

Palestinians remember this as the ‘Nakba’ (the catastrophe). Zionists forces seized many of the former homes of Palestinians: to this day many Palestinians still possess the British mandate deeds to these properties. Israel’s ethnic cleansing has continued, more or less, ever since. Under the UN-mandated partition plan Israel was given 47% of historic Palestine it now occupies approximately 90% of it. That which is not directly held is heavily controlled. The 1967 six-day war led to the expulsion of a further 300,000 Palestinians. At present, there are approximately 5 million Palestinians recognised as refugees by the UN.

Roughly 20% of Israel’s population is Palestinian or ‘Israeli Arab’ in the official lexicon. As it stands, Israel has close to 70 discriminatory or ‘apartheid’ laws. There is, for instance, the Law of return which guarantees automatic Israeli citizenship to all Jews irrespective of where they are born (an honour not afforded to Palestinians displaced by Israel). Israeli Palestinians, by contrast, are subject to a ban on family unification and are prohibited from living in Israel should they marry a fellow Palestinian from Gaza or the West Bank under the Citizenship and Entry Law. [1]

Unlike most liberal democracies, Israel classifies its citizens as holding differing ‘nationalities’. It distinguishes between citizenship rights and national rights; the latter are reserved almost exclusively for its Jewish citizens. National rights are deemed to be superior to citizenship rights so if there is a conflict between a ‘Jews national right and a Palestinians individual citizenship rights, the national right is given priority by officials and the courts’. The Justice Minister, Ayelet Shaked, confirmed this earlier this year when she stated that Israel should provide ‘equal rights to all citizens but not equal national rights.’ She added: ‘Israel is a Jewish state. It isn’t a state of all its nations.’ [2]

There is an admissions committee Law which enables communities to reject housing applicants based on ‘cultural and social suitability’; a euphemism for denying residency to non-Jews. Ethnic separation is further reinforced through the education system. Barring a few exceptions most educational institutions are separated into Jewish schools (teaching in Hebrew) and Arab schools (teaching in Arabic). Sociological studies show that not a single positive reference to Palestinians exists in Israeli high school textbooks. This all leads to a situation where there is minimal contact between Jews and Israeli Palestinians.[3]

Further, As the journalist David Sheen points out ‘The Israeli government has long funded various efforts to try to prevent romantic relationships between Jews and non-Jews, both inside territories it controls and around the world.’ By law, Israel does not allow people of different religions to marry one another. In recent years, Israeli government initiatives against mixed relationships both inside and out of Israel have been led by the far-right Jewish Home party and its leader Naftali Bennett.

During Bennett’s time as education minister, Israel has removed books on mixed romantic relationships from recommended reading lists for high schools. In his other role as the Minister for Diaspora Affairs, Bennet has upped the ante and funding on stamping out relationships between Jews and non-Jews overseas as well.  In June 2016, he told a Knesset (Israel’s Parliament) committee that ‘the marriage of Jews to non-Jews in modern times is a disaster on par with four other tragedies of Jewish history, including the Nazi Holocaust.’ A few months later two Israeli’s beat to death a Sudanese asylum seeker because he dared to talk to a group of Jewish girls. He was so severely beaten that his face was unrecognisable to members of his own family.[4]

Israeli newspaper’s report that some public swimming pools are also separated; there are specific visiting times for Jews and separate times for Bedouins. A recent survey by the Pew research centre found that nearly half of Israel’s Jewish population felt that Israel’s Arabs should be expelled or transferred from Israel.[5] A survey conducted in 2012 found that 52% of Israeli Jews agreed that African migrants ‘are a cancer.’ [6]

In June of this year, Israel’s Knesset disqualified a bill suggested by an Arab party that called for all citizens to be treated equally, rejecting the argument it must recognise the rights of its Arab minority as equal to the Jewish majority. The fact that the bill was dismissed before even being debated by the Knesset was apparently unprecedented. Israel doesn’t have a formal constitution; this role is effectively carried out by a system of Basic Laws. In July this month, the Israeli Parliament passed a new Basic Law the Jewish ‘Nation-State’ Law. This Law declares that only Jews have a right to self-determination in the country.  The Law was widely condemned outside of Israel, and by powerful voices within, with the famous Israeli composer Daniel Barenboim, for instance, saying it made him ‘ashamed to be Israeli’. [7]

Such prejudice, formal separation and treatment, however, is not limited to Israel’s Palestinian/Arab population. Israeli officialdom has long celebrated Operation Moses; which involved saving thousands of Black Ethiopian Jews from persecution and bringing them back to Israel. This, however, is only part of the story. Despite Israel’s claim to be a Jewish state, many Ethiopian Jews have faced appalling discrimination and racism. They are denied equal opportunities, suffer from the highest poverty rates among Israel’s Jews and most of their children study in predominantly Ethiopian schools. Many are confined to the periphery of Israeli society. In the 1990’s Israeli blood banks stealthily refused to accept the blood of Ethiopian Jews. Further, the Israeli government admitted that it gave birth control injections to Ethiopian women without their consent.[8]

Other non-Jewish black migrants to Israel have suffered a similar fate. Last year Prime Minister Benjamin Netanyahu devised a scheme to send roughly 40,000 African migrants to Rwanda and Uganda on a per head fee basis; he only dropped the plan after an outcry. To justify his scheme, he argued in a public speech that the arrival of African refugees was ‘much worse’ for Israel ‘than severe attacks by Sinai terrorists’. In March of this year one of Israel’s two chief rabbis, Yitzhak Yosef, called black people ‘monkeys’ and the Hebrew equivalent of the N-word in his weekly sermon.[9]

Since 2011 there has been a vicious Civil War in Syria which shares a border with Israel. This has led to the deaths of approximately 500,000 people and created over 5 million refugees. Naturally neighbouring countries have had to bear the bulk of the burden for most of these. Turkey has accommodated approximately 3.5 million refugees, Jordan (a small country) 1.2 million (to the point where it has had an almost unbearable impact on its infrastructure) and Lebanon around 1 Million.[10]Many countries around the World have also taken in some. Israel by contrast hasn’t taken in any (one doesn’t have to be a genius to figure out why). 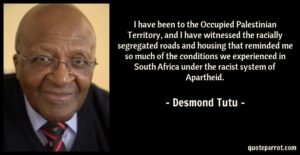 As part of the Rome Statute of 2002, International Law defines the crime of apartheid as ‘an institutionalised regime of systematic oppression and domination by one racial group over any other racial group or groups and committed with the intention of maintaining that regime.’ That is precisely what operates in Israel no matter how much its officials seek to disguise it in legalese and sophistry. Bishop Desmond Tutu- who has first-hand experience of apartheid in South Africa-argues in fact that Israel’s treatment of Palestinians is worse than that of Black people during apartheid; he has called it ‘apartheid plus.’ Former American President Jimmy Carter made similar comparisons.[11] As the British writer Jonathan Cook points out;

“The discrimination faced by Palestinians in Israel is not illegal, informal, unofficial or improvised. It is systematic, institutional, structural and extensively codified, satisfying very precisely the definition of apartheid in International Law and echoing the key features of South African apartheid’.[12]

To conclude, from the above it’s very clear what kind of polity Israel is. This also raises the question of whether Israel can legitimately be described as a democracy. In Britain, however, we are now faced with the situation whereby to refer to Israel as a racist endeavour will mean that an individual is liable to lose their membership of the largest party in the country and this when Israel’s own leading figures are often unapologetically racist. This consensus, I strongly suspect, will become the norm in British politics (as it has in America) to the point where any meaningful discussion and criticism of Israel will effectively be curtailed.

[10] The likes of Jordan and Lebanon have also absorbed large numbers of Palestinian refugees displaced by Israel since its inception.

Is Israel an Apartheid State? Rhetoric or Reality

Gideon Levy: “Only for Jews”: The West Bank’s Apartheid Springs