You Are Here: Home → Israel To Commit War Crime Against West Bank Villagers 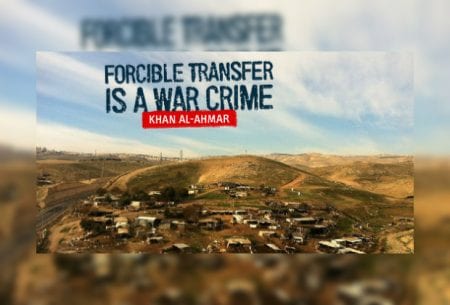 [Editor’s Note: Twelve Palestinian communities in an area near Jerusalem are at risk of expulsion. These villages have been living for years without basic health, education, and welfare services, and without proper electricity or sewage systems. They are under constant surveillance for “illegal” construction—structures built without a permit from the Israeli government (permits are impossible to obtain in this region). These structures, many built of necessity to house growing families, are then quickly demolished by Israel’s Civil Administration.

Israel makes life almost unbearable for these Palestinians. Demolishing homes is just the beginning: grazing and farming land is confiscated, making it harder and harder for the residents to feed themselves and make a living; roads are nearly impassable; settlers and Israeli authorities harass them daily.

This is taking place not in Israel, but in the West Bank, on Palestinian land under full control of Israel.

One community that is at risk of imminent expulsion is Khan al-Ahmar. The Bedouin tribe has already been expelled twice since the 1950s.]

B’Tselem Executive Director Hagai el-Ad said, according to Days of Palestine: “Following the state’s response submitted earlier today to the [Israeli] High Court of Justice, that the state was asking the court to authorize a war crime.”

He explained: “No sanctimonious language about a ‘planning, proprietary and realistic’ alternate, or ‘time to prepare’ can erase the disgrace or hide the facts: the destruction of Khan al-Ahmar means the forcible transfer of protected persons, and forcible transfer is a war crime.”

El-Ad added: “Those responsible for it will bear personal criminal liability – exactly as B’Tselem stated two weeks ago, in a letter addressed to the prime minister, defence minister, justice minister, chief of staff and the head of the Civil Administration.”

According to updated data, Khan al-Ahmar community, which lives on land Israel has earmarked for settlement expansion in the area, is home to 32 families numbering 173 persons, including 92 minors.

It has a mosque and a school, which was established in 2009 and serves more than 150 children between the ages of six and fifteen – some of them from neighbouring communities.

Khan al-Ahmar is located around the illegal Israeli settlement of Ma’aleh Adumim, in the occupied Palestinian West Bank.

The Israeli occupation considers it strategic for building and expanding illegal settlements and establishing a territorial link between Ma’aleh Adumim and Jerusalem.

More background on Khan al-Ahmar and the other communities can be found here.