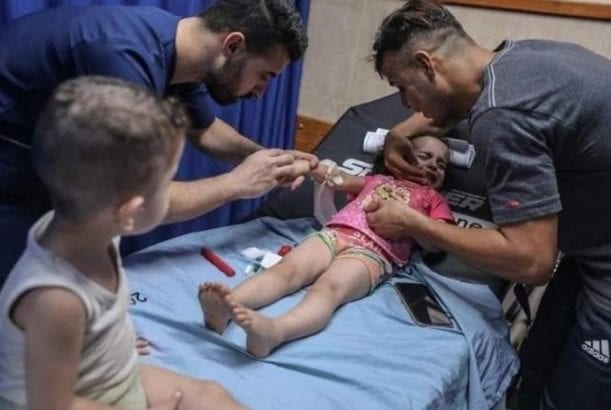 A 3-year-old girl, an 11-year-old boy, and at least two women were among those injured by Israeli warplanes. (Palestine Chronicle)

“We’ve been through this countless times, but it’s harder now with a global pandemic and the whole world falling apart, no electricity and no water.” A 3-year-old girl, an 11-year-old boy, and at least two women were among those hospitalized… Two reports below: a media analysis and a report from the ground…

By Alan Mcleod, reposted from FAIR

Israel is bombing Palestine again, although you likely wouldn’t guess that from watching TV news. For the eleventh straight night, Israeli Defense Force warplanes have been bombing the densely populated Gaza Strip. Israel’s bombs have caused considerable damage, forcing the shutdown of the area’s only power plant.

But US corporate media, focused on the coronavirus and election coverage, have shown little interest in the renewed violence in the Middle East. Searching for “Gaza” on the websites of NBC News, CNN, MSNBC and PBS elicits no relevant results. Nor has Fox News addressed the bombings, although it did find time (8/18/20) to cover the archaeological discovery of an old soap factory in Israel’s Negev Desert.

Other major news networks were not much better. In a wide ranging interview with Trump advisor Jared Kushner, CBS’s Face the Nation host Margaret Brennan (8/16/20) did mention that “there were hostilities overnight in Gaza. There were Israeli airstrikes. Palestinian militants fired off rockets,” in a question about the US’s role in the Middle East, but did not return to it.

Israel attacked targets of Islamist group Hamas in Gaza and halted fuel supplies to the enclave Thursday in the latest retaliation against fire bombs suspended from balloons that have been released from the Palestinian territory.

The story clearly presents the bombing as a reactive Israeli counter-effort—not an attack on Palestine, but a response against Hamas, which it describes not as a political party but as an “Islamist group.” Hamas, it insists, was the target, despite later noting that a UN-run school was also hit. AFP did not comment on the lack of symmetry between homemade explosives tied to balloons and F-35 jets.

ABC News, meanwhile, relied on another news agency for all of its (limited) coverage (two pieces), reprinting (8/16/20) an Associated Press article that similarly presented the cutting off of Gaza’s electricity supply as a “response” to aggression from the “Palestinian militants” of Hamas.

A second AP story, headlined “Israel Strikes Gaza Targets After Arson Balloons Launched,” was picked up not just by ABC (8/16/20) but by influential outlets like the New York Times (8/15/20), Washington Post (8/16/20) and Guardian (8/16/20). The piece is at pains to present Israeli actions as directed purely against Hamas, and as a response, not an aggressive action, allowing Israeli military spokespersons to drive the narrative. Indeed, much of the report reads like an IDF press release.

A leaked 2009 publication from the Israel Project, an Israeli/American group that advises Israel advocates on what language to use when discussing the Palestine conflict, stresses that they should “clearly differentiate between the Palestinian people and Hamas.” “If it sounds like you are attacking the Palestinian people (even though they elected Hamas) rather than their leadership, you will lose public support,” they counsel. Media, it seems, are doing their job for them, in much the same way they reflexively present US actions against Iran as a “response” or a “counter” to the threat from Tehran (FAIR.org, 6/6/19).

In their seminal books on media coverage of the conflict, Bad News From Israel and More Bad News From Israel, Greg Philo and Mike Berry wrote that TV news followed a “consistent pattern,” which misleadingly presented the events as “Palestinian action and Israeli response and retaliation,” their focus group sessions showing that the presentation had a “significant effect” on how the public remembered events and apportioned blame, effectively legitimizing Israeli actions. Sixteen years after their first study was published, corporate media appear to be following exactly the same playbook.

The US press sampled here have produced barely any original coverage of the 11-day (and counting) bombing campaign of the area commonly described as the world’s largest open-air prison. This is in contrast to foreign channels such as Al-Jazeera and RT, or alternative media like Democracy Now!, all of whom have followed the events in more depth, and often with fewer resources. When corporate media have covered it, they have followed tried and tested conventions that reproduce an Israeli-friendly narrative.

Media coverage of Israel/Palestine is a topic FAIR has criticized for decades (e.g., Extra!, 1/91; Extra! Update, 2/05; FAIR.org, 8/6/14, 3/29/19). The reporting on the latest round of attacks on Gaza follows the patterns we have often remarked on: downplaying Palestinian suffering and viewing the conflict from an Israeli state perspective.

Alan MacLeod @AlanRMacLeod is a member of the Glasgow University Media Group. His latest book, “Propaganda in the Information Age: Still Manufacturing Consent,” was published by Routledge in May 2019.

By Yumna Patel, reposted from Mondoweiss

Israel has been bombing Gaza for eight days straight, all as part of what Israel says is a response to incendiary balloons sent from Gaza into Israeli territory.

The night sky in Gaza has lit up in hues of red and orange every night for more than a week, with Thursday marking the eight consecutive night of Israeli airstrikes.

Despite reported efforts by Egyptian officials to mediate a cease fire, the cross-border tensions don’t seem to be stopping anytime soon, with the Hamas movement releasing a statement on Friday saying it “will not hesitate to wage a battle” with Israeli forces, “if the escalation, bombardment and siege [of Gaza] continues.”

The Israeli military has maintained that the airstrikes are targeting outposts belonging to the military wing of the Hamas movement, who Israel says is responsible for “explosive and arson balloons launched from the Gaza Strip into Israel”.

Local Palestinian media has reported several instances over the past week during which Israeli airstrikes have caused damage to residential and non-Hamas affiliated structures, and in some cases, injury to civilians.

Earlier this week, Wafa news agency reported that following an airstrike on the Bureij refugee camp in the central Gaza Strip,  a 3-year-old girl, 11-year-old boy, and a woman were hospitalized after sustaining serious injuries. “Serious damage” was also reported on homes in the area.

Another woman was hospitalized in a separate airstrike in the Beit Hanoun Area in northern Gaza.

On Sunday, Palestinian media reported that a 35-year-old Palestinian man was critically injured after an unexploded Israeli ordnance detonated in the al-Zaytoun neighborhood of the southern Gaza Strip.

“We’ve been through this countless times,” Omar Ghraieb, 33, a Palestinian journalist told Mondoweiss, referring to Israeli airstrikes and assaults on Gaza, that in the past have lasted for weeks at a time.

“But it’s harder now with a global pandemic and the whole world falling apart, no electricity and no water,” he said.

Ghraieb pointed out that even though Gazans are “used to bad things and trauma,”  situations like these “never get easier.”

The latest bombardments come at a difficult time for Gaza’s 2 million residents, who suffer from daily issues with water, electricity, rising unemployment, and most recently, the coronavirus pandemic.

While Gaza has successfully managed to keep the rate of infection of the coronavirus remarkably low, compared to the occupied West Bank and East Jerusalem, the health ministry there just reported nine new cases of COVID-19, bringing the total number of new cases since Wednesday to 18.

On top of the constant threat of COVID-19 in Gaza, earlier this week, Gaza’s sole power plant shut down and halted operations, due to an Israeli ban on fuel imports into the territory.

The ban on fuel was made punitively by Israel, also in response to the incendiary balloons that Israel says are the reason for the latest round of airstrikes.

While Gazans have been suffering from power cuts and hours-long blackouts for years, residents say that things are more difficult now because of COVID-19.

“We’ve been going through daily power outages well over a decade now,” Ghraieb said. “[But] it’s tougher with the summer, a global pandemic, Israeli attacks, and just no light or internet to stay connected to the world and share the hell you are living through.”

“You feel like you are isolated, and sentenced to live through a blazing hell,” he said.

On Tuesday, the ICRC expressed concerns over the power shortages in Gaza, warning that the latest blackouts could disproportionately affect the already crumbling health sector, as eight hours of electricity a day have been cut down to merely just three to four hours.

When asked what message he had for the international community about the latest attacks on Gaza, Ghraieb told Mondoweiss that he “has no message for a world that disappointed us for decades, and saw us being prey to Israeli abuse, occupation, apartheid and enthic cleansing.”

“The world doesn’t care about us, and I don’t beg for justice,” Ghraieb said. “Justice will be served eventually.”

Yumna Patel is the Palestine correspondent for Mondoweiss.

WATCH: Israel’s blockade of Gaza during the coronavirus pandemic

Corona in the Gaza Strip – Only 70 ICU Beds Available