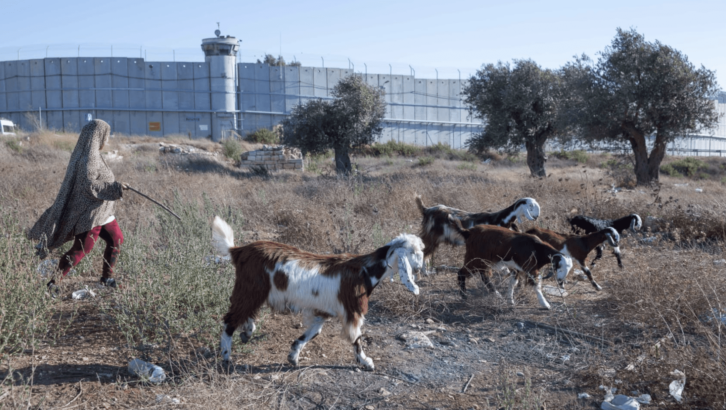 File photo: A Palestinian farmer by the separation barrier in the Bethlehem area, the West Bank, September 11, 2018. Credit: Emil Salman

Author Amira Hass, a Jewish Israeli, pressed the Israeli government for an explanation for the sharp increase in refusals to allow Palestinians access to their land that was cut off by the Separation Wall. The response appears to be little more than a runaround; official reasons given for denial of permits have often been dismissive: the plot of land in question is “too small to cultivate” or the request was “fraudulent.”

The Separation Wall (also called Apartheid Wall) is a barrier built by Israel, purportedly to stop terrorism; Israeli claims of its success are  deeply problematic.

85% of the wall cuts into the West Bank, isolating about 9% of it, leaving an estimated 25,000 Palestinians isolated from their land.

According to HaMoked, the Israeli Center for the Defense of the Individual, the wall

infringes the residents’ fundamental rights to movement, to gain a living, to education, health, and to a minimal degree of dignity…In the space between the wall and the Green Line, Israel operates a regime that discriminates between Jews and Palestinians. The result is an apartheid regime that distinguishes between residents based on their ethnic background. Making a distinction on ethnic grounds is a crime under international law.

On 9 July 2004, the International Court of Justice, in The Hague, published its advisory opinion on the wall. It held that construction of the wall, and the regime that Israel instituted to accompany it, violate international law, and that Israel must tear it down and compensate the Palestinians who suffered loss as a result of its construction.

Completely ignoring the ICJ’s advisory opinion, and despite delays in construction resulting from petitions to the HCJ, the wall is still being built, and with it the de facto annexation of areas into the State of Israel and the gross violations of the residents’ rights continue.

The sharp increase in the number of rejections of requests submitted by Palestinian farmers who want to reach their land on the other side of the separation barrier amazed even the staff of Hamoked – Center for the Defense of the Individual. This organization knows something about the abuse caused by the bureaucracy of the barrier, because in the past 10 years it has handled about 1,400 requests by farmers whose access to their land has been blocked.

On November 26, after a long delay, the Civil Administration sent the figures for the number of permits and the percentage of refusals to Hamoked, in response to a Freedom of Information request.

When the separation barrier was built deep inside the West Bank, several of us warned that its route was not chosen for security purposes but for the sake of annexation by another name. And in fact, the large Palestinian area penned between the barrier and the Green Line has been turned into promenades and hiking and biking paths open to Israelis, while the Palestinians, the legal owners of the land, enter only after an odyssey of requests for permits, which are steadily decreasing.

Some questions I sent to the spokesman’s office of the Coordinator of Government Activities in the Territories (COGAT) are detailed below with a few abridgments, followed by the full answer:

The regulations of the Civil Administration regarding entry into and residence on the seam zone were decided based on the decision of the court, and are updated from time to time in accordance with procedures and need. The seam zone is defined as a closed military zone and entry to it is allowed with a permit, due to the fact that it is an area of land situated west of the security fence. Every request for a permit that is received is examined individually, based on policy and criteria.

The change in the trend of accepting and approving the requests stems from a number of variables; it is possible that in certain cases requests were received during various periods in which they no longer meet the present updated criteria, and therefore were refused.

In addition, in certain cases land was found that is not even in the area of the seam zone, but rather adjacent to it, and was restored from the seam zone to the Palestinian side in Judea and Samaria, and accordingly we see the change in the number of permits. In addition, occasionally there is a change in the trend among those requesting the permits, and accordingly in the number of requests that are approved.

For additional details you can peruse the file of permanent orders for the seam zone, which is accessible on the internet and which explains the criteria for receiving an entry and residence permit in the seam zone.

A defense source told Haaretz, “There are figures that point to changes in the number of permits, which stem from changes in the duration of the permit (an agricultural permit was previously given for half a year and is now given for two years) and changes in the criteria for the types of permits (members of farming families previously received agricultural employment permits and now there is a designated permit for a farmer’s family members).” The source also claimed that “in light of the absence of any physical obstacle between the seam zone and the State of Israel, there are many attempts to receive a permit fraudulently, and that requires a meticulous examination of the requests.”

And maybe the issue remains unclear to you because Palestinians are far from the public eye, and especially farmers whose land is their livelihood and their property and their savings, but is designated for our future Israeli private homes. Not to worry: There will be more articles about the massive land robbery being perpetrated by Israel. Incidentally, the defense source attached the orders file, but with a link to … the Hamoked website.

Hamoked’s executive director Jessica Montell said, “The only justified excuse for closing the seam zone, according to all the declarations and promises of the army and the government, is security related, but only a negligible percentage of the refusals is for security reasons. COGAT says outright that people who received permits in the past no longer meet the new criteria determined at the start of 2017.”

Montell emphasized: “That is precisely Hamoked’s claim. Many people are suddenly not getting their permits renewed due to the new excuses – such as the infuriating claim that it is a ‘tiny plot.’ What difference does it make that the plot is small? A person has a right of access to the land he owns even if it’s only one square meter.”