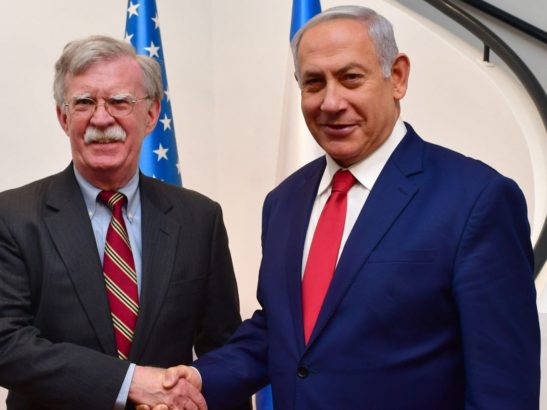 It appears that Bolton, who owes his position to Sheldon Adelson and who channels the mega-donor casino mogul’s views and priorities, has overruled – or is seeking to overrule – Donald Trump and to put him back in his subservient place…

As noted in the AL JAZEERA news report below, U.S. National Security Adviser John Bolton, on a visit to his Israeli masters, has publicly proclaimed three conditions for any implementation of his president’s publicly proclaimed intention to withdraw all the U.S. ground forces illegally deployed in Syria — (i) the security of Israel and “our other friends in the region” must be “absolutely assured”, (ii) the Islamic State “is defeated and is not able to revive itself and become a threat again” and (iii) Turkey must guarantee the safety of the Syrian Kurdish fighters whom the Turkish government publicly proclaims to be “terrorists”.

It would be simpler and more succinct to say “never”.

A related Agence France Presse article reports that Bolton also announced that, notwithstanding Trump’s prior announcement that all U.S. forces would be withdrawn promptly and that defeating the Islamic State was the only reason why he had left them in Syria until now, there will be no timetable for a withdrawal set until after all of Bolton’s conditions have been met and that “all 2,000 U.S. forces may not be pulled out” and some could remain “as part of efforts to counter Iran’s presence.”

It appears that Bolton, who owes his position to Sheldon Adelson and who channels the mega-donor casino mogul’s views and priorities, has overruled — or is seeking to overrule — Donald Trump and to put him back in his subservient place.

Unless Bolton is promptly fired for insubordination, it would appear that Trump’s first — and presumably last — attempt to shake off the shackles of the bipartisan Israel-First, full-spectrum-global-dominance-obsessed and permanent-war-addicted foreign policy élite and to take even a small first step toward a revolutionary, realist and genuine America-First foreign policy will prove to be stillborn.

International law attorney John Whitbeck, based in Paris, is a widely published analyst on the Middle East. Among his essays is the commentary, What ‘Israel’s right to exist’ means to Palestinians. He is a board member of the Council for the National Interest (CNI).

US will ‘assure’ Israel’s security before Syria pullout

John Bolton says US troops withdrawal from Syria conditioned on security of Israel and other allies and defeat of ISIL.

The withdrawal of US troops from northeastern Syria would take place in a manner that “absolutely assured” the security of Israel and other US allies in the Middle East, a top adviser to President Donald Trump has said.

John Bolton made the pledge on Sunday, hours after laying out the conditions for the US troop pullout from Syria on the defeat of the Islamic State of Iraq and Levant (ISIL, also known as ISIS), as well as assurances from Turkey over the safety of Kurdish fighters allied with the United States.

Speaking to reporters leading up to talks with Israel’s Prime Minister Benjamin Netanyahu, Bolton said the pullout would be done in a way that guaranteed the ISIL “is defeated and is not able to revive itself and become a threat again”.

And it would be carried out in such a way as to “make sure that the defence of Israel and our other friends in the region is absolutely assured, and to take care of those who have fought with us against ISIS and other terrorist groups,” he said.

The pullout announced on December 19 was initially expected to be completed within weeks, but the timetable has slowed as the president acceded to requests from aides, allies and members of US Congress for a more orderly withdrawal.

Bolton’s comments mark the first public confirmation that the withdrawal has been slowed.

Earlier in the day, the national security adviser told reporters travelling with him there was no timetable for the move.

Israeli officials have expressed concern that a swift withdrawal of the roughly 2,000 troops could enable Iran to expand its influence and presence in war-torn Syria.

Al Jazeera’s Stefanie Dekker, reporting from occupied West Jerusalem, said Israel was particularly concerned about the presence of Iranian-backed militias near its border with Syria, “particularly that of Hezbollah”, a Lebanese Shia movement.

“Israel is worried that a US pullout could cause a power vacuum. And it is concerned that Iranian backed militias will benefit from that situation”, Dekker said, noting Israel has carried out scores of air raids inside Syria aimed at suspected Iranian arms transfers to Hezbollah.

“Netanyahu will be very keen to show why Israel is concerned,” she said.

“He will be taking the US national security adviser tomorrow to the occupied Golan Heights, close to the border areas where Israel has been carrying out a military operation to destroy tunnels it says Hezbollah has dug from the Lebanon border.”

Netanyahu, during his joint press conference with Bolton, said he planned to take Bolton to visit the Golan Heights before he leaves for Turkey on Monday if weather permits.

He again urged the US and other countries to recognise Israel’s sovereignty over the strategic plateau it seized from Syria in the 1967 Six-Day War and later annexed.

For his part, Bolton said the US backed Israel’s right to self-defence and said the Trump administration will continue to work with Israel to counter “the continuing threat of Iran’s quest for deliverable nuclear weapons”.

Middle East and North Africa Program Director for the International Crisis Group Joost Hiltermann, said the latest US move showed a lack of “coherent policy” on the Middle East.

“The US’s foreign policy has been in disarray ever since Trump has become president,” he told Al Jazeera. “Trump and his aides have wanted to pursue a foreign policy that is quite different from his predecessor Barack Obama.”

Trump’s announcement about the intended troop withdrawal was greeted by surprise and condemnation from many US legislators and allies, and prompted the resignation of Defense Secretary Jim Mattis and the US special envoy for the anti-ISIL coalition in protest.

Secretary of State Mike Pompeo is following Bolton to the Middle East this coming week for an eight-country tour of Arab allies to shore up support for the administration’s partners in the region.