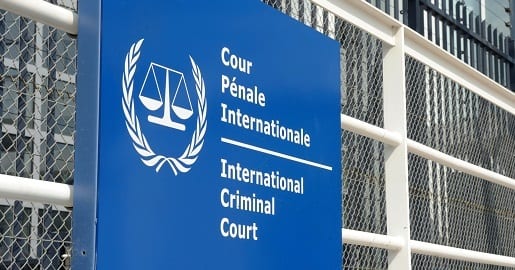 On 17 July 1998, the Rome Statute of the International Criminal Court, creating the ICC, was adopted by a vote of 120 to 7, with 21 countries abstaining. The seven countries that voted against the treaty were China, Iraq, Israel, Libya, Qatar, the United States, and Yemen. Israel voted against because the list of war crimes included “transferring population into occupied territory.”

The ICC is finally about to begin pre-trial actions for Israeli crimes “committed in the occupied Palestinian territory, including East Jerusalem, since June 13, 2014.”

But the presiding judge has already ruled once in favor of Israel… is the fix in?

It’s strange that no US media outlets have run any story about this major legal development…  The Israeli report said that if a formal investigation commenced it would be “a dramatic step which would impact Israel’s status in the international community.”

On July 13th, the International Criminal Court announced it would commence the pre-trial phase in a war crimes case brought by the Palestinian Authority against Israel.  An Israeli news report called the move “unprecedented.”  A three-judge panel has been appointed to hear the case: Peter Kovacs (presiding judge), Marc Perrin de Brichambaut, and Reine Adélaïde Sophie Alapini-Gansou.

It’s alarming to learn that in the original ICC ruling which directed the prosecutor to reopen the Mavi Marmara case, which she had closed, Kovacs was the only judge to vote No. He said that the gravity of the incident was not sufficient to bring it before the court, and that the killings were an incident involving the IDF and the Turkish humanitarian relief group whose members died.  As such, he found it did not fit the definition of a war crime. One senses that the fix may be in. By appointing a judge who has already ruled that a major war crime committed against Turkish citizens by Israel should not be investigated, the Court may have already doomed the PA case.

Though the current case was initially filed in 2015, many observers believe that the past two months of bloody massacres by Israeli forces in Gaza have spurred the ICC to take a more active stance regarding the case. In fact, the ICC timeline included in the pre-trial announcement makes clear that the PA made a filing at the end of May asking the Court to examine current Israeli violations of international law (i.e. the Gaza bloodshed).  It seems clear that the Great March of Return and Israel’s vengeful response which has murdered [over 150] Gazans, almost all unarmed civilians, is what moved the international court to action.

[On July 14th], Israeli snipers murdered a teenage boy who attempted to climb the fence Israel installed.  Israel claims it must defend its territorial sovereignty.  First, it’s unclear how an unarmed teenage boy endangers anyone, let alone Israeli sovereignty.  Second, Israel has refused to define its border with Palestine, including Gaza.  It has also refused to recognize the rulers of Gaza, Hamas.  In order for a nation’s sovereignty to be recognized and respected, it must negotiate borders with its neighbors.  Israel has repeatedly refused to do so, not just with Palestine, but with Lebanon and Syria as well.  No countries recognize Israel’s conquest of the West Bank, Gaza or Golan.  Thus no international border can be negotiated.

After the young boy died, Hamas fired 100 rockets into Israel, which wounded two Israelis.  The Israeli response sent U.S.-made F-16s on bombing runs throughout Gaza.  Israel described it as the most savage assault on the enclave since the last major Israeli invasion in 2014.  Another teenage boy playing in a public park was killed after a warplane dropped a bomb on a next-door high-rise.  The IDF spokesperson claimed the IDF had warned civilians about the attack, as if to absolve the army of responsibility.  But he offered no proof that the army had done so.

It’s rather strange that no media outlet outside of this Israeli one has run any story about this major legal development.  The Israeli report said that if a formal investigation commences it would be “a dramatic step which would impact Israel’s status in the international community.”

The Court’s 11-page announcement calls for educating the Palestinian populace both about the ICC itself, and about the role it will play in adjudicating the case directing its staff:

…To establish…a system of public information and outreach activities for the benefit of the victims and affected communities in the situation in Palestine and report back to the Chamber in compliance with the principles established in the present decision;

According to the Israeli report, it also calls for Palestinian victims to come forward and give testimony to Court staff about their suffering.

This is a day that Israel has dreaded for years.  It is a day it has avoided like the plague.  It’s gone to great lengths to co-opt the ICC.  For example, the mentor of Fatou Bensouda, the current prosecutor-general, Luis Ocampo, has gone on the payroll of the Israel Lobby and been paid handsome consulting fees for his services.  Presumably, that might’ve been the route Bensouda herself chose had the Gaza massacre not intruded.

It should be noted that this development does not mean the ICC is actually opening a formal case against Israel.  As the headline notes, this is a pre-trial phase and the case has passed an initial hurdle on its way to being formally prosecuted.  But if Israel continues its pursuit of its interests using methods of mass slaughter as it has for years, then the case should successfully overcome any and all hurdles placed in front of it.