You Are Here: Home → How Israel Silences Palestine in EU Circles 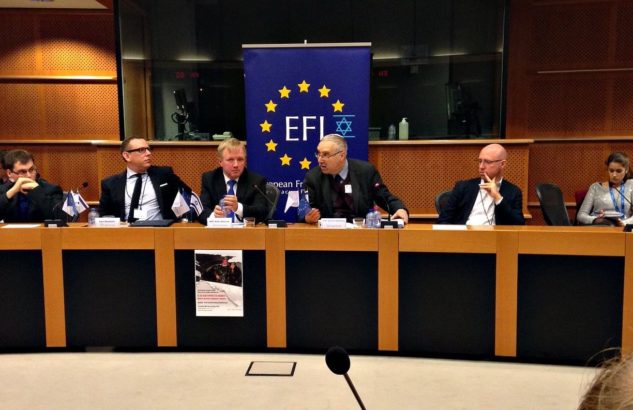 NGO Monitor head Gerald Steinberg (fourth from left) addresses the European Parliament in Brussels on Nov, 11, 2014. The event, “Is EU Aid going to Hamas?” was organized by the European Friends of Israel (EFI) group and hosted by German MEP Arne Gericke.

EP Today, a news magazine for the European Parliament, published a slanderous op-ed by right-wing Israeli NGO Monitor that contained false a misleading statements about Palestinian NGOs. Then EP Today would not publish a Palestinian response….

By Issam Aruri, published by IMEMC

Imagine the following: a toxic op-ed is published that defames your organisation. You contact the website on which it features and are invited to publish a rebuttal.

The next day, you submit your article. As the editors are about to put it online, they are targeted by a sophisticated disinformation campaign.

More than a dozen people call the editors, seemingly on your behalf, and apply heavy pressure to publish the article. One of the callers even tries to bribe them to get it published.

This confuses and intimidates the editors, who have never experienced anything like it.

They fear that publishing under pressure may damage the independence and reputation of their website, which is a news magazine for the European Parliament.

The editors contact you and you clarify right away that none of these calls originated from your organisation. You urge them to publish your article, as they had promised. But despite your repeated requests, they don’t do so. They don’t even respond anymore to your phone calls and emails.

This is what recently happened to the Palestinian NGO network PNGO, which is an umbrella of 134 civil society organisations in the West Bank and Gaza Strip.

The op-ed in question was mine, which I had submitted to a Brussels-based website called EP Today.

According to its own information, EP Today is “designed only” for policy opinions by members of the European Parliament. On 26 February, however, it published a slanderous op-ed by NGO Monitor that targeted PNGO.

NGO Monitor is an Israeli right-wing organisation that cooperates with the Israeli government in undermining NGOs that criticise Israel’s violations of human rights and international law.

It constantly attacks Amnesty International, Human Rights Watch and dozens of other human rights and civil society organisations, including Israeli NGOs. PNGO is high on its target list.

In its article, NGO Monitor provided false and misleading information about PNGO’s mission and conduct.

While PNGO is a catalyst for a vibrant civil society in Palestine, NGO Monitor framed PNGO as a “ring leader” of a “gang” of NGOs that shrink Palestinian civil space.

For a long time, we ignored organisations like NGO Monitor that provide cover for the Israeli occupation. But this time, we decided to submit a rebuttal to this toxic propaganda.

As mentioned above, EP Today violated its promise and didn’t publish our rebuttal. To make things worse, our article was apparently forwarded to NGO Monitor, which allegedly tried to prevent its publication.

An editor we spoke to implied this, with reference to one member of EP Today’s board of directors, who seems to have ties to NGO Monitor. This would constitute grave professional misconduct, calling into question EP Today’s independence and integrity.

In any case, we won’t be silenced. Our rebuttal of NGO Monitor’s propaganda, titled “What Europe can do to defend civil space: a response by the Palestinian NGO Network”, is now available for everyone, after we published it on our website.

Meanwhile, our real concern is not the article.

What troubles and burdens us is the big picture: the all-out attack that the Israeli government and its affiliated organisations such as NGO Monitor have launched against Palestinian human rights defenders.

Shrinking space for civil society is a global phenomenon. However, the threat it poses in Palestine has an extra dimension: Israel’s strangling military occupation, which began more than 51 years ago.

As a result of the occupation, Palestinians live without a sovereign government, without basic protection and in a fragile economy that heavily relies on international aid.

In this context, PNGO’s member organisations play a crucial and indispensable role in providing services and in preserving social cohesion.

Israel’s attack on us aims to neutralise NGOs that expose its violations of international law and to break the backbone of Palestinian society at large. The attack is meant to sustain and entrench the occupation.

The reality in which we live is this: We face draconic digital surveillance and interference by Israel, which violates our fundamental privacy and obstructs our work.

Like NGO Monitor, the Israeli government engages in smear campaigns against Palestinian NGOs.

For example, on 1 July 2017, Israeli UN Ambassador Danny Danon branded our members Al-Haq and Al-Mezan as “supporters of terror”, based on false allegations that they have ties to Hamas and the PFLP.

Most recently, the Israeli Ministry of Strategic Affairs published a slanderous report that contains similar allegations and aggressively accuses the EU of funding Palestinian and European NGOs that sponsor terror and promote Boycott, Divestment, Sanctions (BDS – the Palestinian-led global campaign putting pressure on Israel to end its violations of international law).

In 2015 and 2016, the director and a staff member of Al-Haq received ongoing death threats.

In response to the threats against the staff member, who is based in The Netherlands and Al-Haq’s representative to the International Criminal Court, the Dutch authorities opened a criminal investigation.

While official results are pending, all indications point in Israel’s direction.

PNGO and the Palestinian Human Rights Organisations Council (PHROC) have compiled their concerns about the escalating campaign to silence, delegitimise and defund Palestinian civil society organisations and human rights defenders in a joint position paper, including recommendations to the EU.

For decades, the EU has invested into civil society organisations in Israel and Palestine that promote its core values “on the ground”. The support and protection of human rights defenders is a declared priority of the EU, as also displayed by the guidelines it adopted in 2008 to that end.

On 3 October 2017, in a comprehensive resolution, the European Parliament sounded alarm about the shrinking space for civil society and called “for continued and increased EU support and funding in creating a free and enabling environment for civil society.”

This is the time to act on these commitments.

We rely on the EU to shield us from Israel’s campaign to destroy Palestinian civil society, which has spread to Europe and is reinforced by organisations like NGO Monitor that are designed to shrink our space.