You Are Here: Home → Ha’aretz: U.S. Rabbis Get Close-up Look at Occupation in the West Bank – Not a Pretty Sight

Ha’aretz: U.S. Rabbis Get Close-up Look at Occupation in the West Bank – Not a Pretty Sight 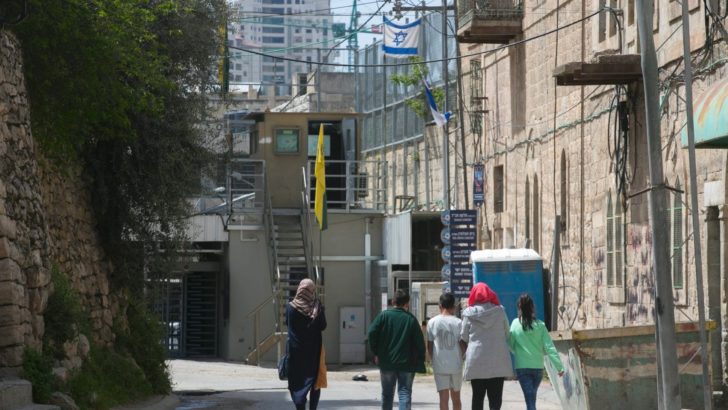 Palestinians walking on a Hebron street. Rabbi Michael Adam Latz of Minneapolis called the tour there Sunday “eye-opening and heart-wrenching.”

The rabbis’ visit comes after 50th anniversary of Israel’s occupation of West Bank. What hadn’t been planned, though, up was that their trip would coincide with one of the worst crises ever in relations between Israel and the U.S. Jewish community.

Rabbi Stanley Kessler first visited Hebron in 1967, just after the Six-Day War. He returned for a second visit in 1973. This week, at age 94, he came back for his third trip and hardly recognized the city.

“I have difficulty seeing what I’m seeing,” he says, pausing for a moment of reflection after a stroll, on a sweltering day, through what used to be the bustling center of this West Bank city. “On my previous trips, the streets were swarming with people. And now, I didn’t even see one single person.”

“Where has everyone gone?” wonders Kessler, who served for 40 years as rabbi of a large Conservative congregation in Hartford, Connecticut, and had studied under Abraham Joshua Heschel, one of America’s most revered rabbis.

Kessler has been around, as they say. During World War II, he served as an aerial gunner and radio operator in the U.S. Air Force, flying 18 missions over Europe. In 1963, he was one of 18 rabbis who marched for black civil rights with the Rev. Martin Luther King Jr. in Birmingham, Alabama. In the late 1960s, he was active in the anti-Vietnam War movement.

But something about this most recent trip to Hebron – a city where the entire story of the Israeli occupation plays out in a nutshell – has shaken him deeply.

“I am terribly sad,” he says. “And now, after hearing the stories of soldiers who served here, I am also infuriated.”

Kessler was one of a group of about a dozen American rabbis visiting Hebron Sunday on a tour jointly sponsored by T’ruah, a U.S.-based organization of rabbis active in promoting human rights, and Breaking the Silence, a group of former IDF soldiers dedicated to fighting the Israeli occupation, who collect and publish personal testimonies about their military service in locations like Hebron. Several of these testimonies were read out during the tour.

Among the participants on the tour are Conservative rabbis, Reform rabbis, a representative of the Jewish Renewal movement, and even one Orthodox rabbi who describes the political orientation of his community as “somewhere between AIPAC and the Zionist Organization of America” – referring to the pro-Israel lobby in Washington, at one end, and one of the most right-wing Jewish organizations in the United States, at the other. Most of them are participating this summer in a special leadership program run by the Shalom Hartman Institute in Jerusalem.

Unlike Kessler, most of the other rabbis have never been to Hebron before. And unlike Kessler, most of them are unwilling to have their names or photos published. Their congregations back home, they explain, might not understand their decision to participate in a tour that offers a different narrative about the conflict – one that puts a human face on the other side and doesn’t paint Israel in the usual rosy colors.

“Most of these people have never had an opportunity to see what the Palestinians experience,” says Rabbi Jill Jacobs, the executive director of T’ruah, in a phone call from her New York office. “Nor have they had the opportunity to talk to Israeli [army] vets who have risked their lives for the country and are deeply committed to its long-term security. We believe that seeing things on the ground and bringing this to the level of human beings makes all the difference.”

The group’s visit comes barely a month after Israel marked the 50th anniversary of the Six-Day War, when the West Bank (and Hebron along with it) was captured from Jordan. What hadn’t been planned, though, when these rabbis signed up was that their trip would coincide with one of the worst crises ever in relations between Israel and the American Jewish community.

Exactly one week before they boarded a bus to Hebron to experience the Israeli occupation up close, the Israeli government – as far as the vast majority American Jews were concerned – told them, in not so many words, to get lost. Last Sunday, the cabinet voted to retract its commitment to build a new and permanent egalitarian prayer plaza at the Western Wall where non-Orthodox Jews (who represent the overwhelming majority in the United States) would have been able to hold mixed-prayer services. Later in the day, the Ministerial Committee for Legislation voted to advance legislation that would deny recognition of any conversions performed in Israel outside the Orthodox state-sanctioned system. That latter decision has since been put on hold.

These government actions have sparked an unprecedented backlash from American Jewish leaders. Might they now find the courage take a stand against other Israeli policies deemed harmful to the future of Israeli democracy – the occupation, for example? This was not a question any of these particular rabbis was ready to address on this trip, at least not on record.

As Frima (“Merphie”) Bubis, their 23-year-old Israeli-born guide from Breaking the Silence, said to them: “It’s so much easier to talk about women’s rights, the Kotel (Western Wall) and egalitarian minyanim (prayer forums).”

Before heading into Hebron, the bus makes a short detour to the nearby settlement of Kiryat Arba. By way of introduction, Bubis points out two sites that speak volumes about the mindset of the local settler population: a park named after Meir Kahane, the racist American-born rabbi whose political party was outlawed in Israel, and the burial place of Baruch Goldstein, a Jewish-American physician who lived in town and who, on the Jewish holiday of Purim in 1994, shot dead 29 Palestinians praying in the nearby Tomb of the Patriarchs.

The rabbis can hardly conceal their shock at the words inscribed on his tombstone: “His hands are clean and his heart is pure.”

Hebron is the only Palestinian city in the West Bank that has an Israeli settlement located within it. A total of about 850 Israelis (including about 200 yeshiva students, who are not full-time residents) live here among 200,000 Palestinians – among them, some of the most radical and violent settlers to have emerged during a half-century of occupation. To make sure that the city’s tiny Jewish population is protected, hundreds of Israeli soldiers patrol the streets here.

But even this very conspicuous military presence is not enough, as the rabbis on the tour soon learn. To avoid friction between the two hostile populations, Israel has imposed heavy restrictions on the movement of Palestinian residents in what used to be bustling downtown Hebron.

Bubis opens a map filled with a maze of different colored lines to illustrate her point. On roads delineated in purple, she points out, Palestinians cannot drive vehicles. On those marked with purple-and-gold stripes, not only are Palestinians prohibited from driving – they are not allowed to open businesses. On roads delineated in red, not only can they not drive or open businesses, they are not even permitted to walk. These red roads, the guide explains, are known in army jargon as “sterile.”

The situation for Palestinians has improved, Bubis acknowledges. Until just a few years ago, on streets where pedestrian movement was allowed, Palestinians were forced to walk down very narrow paths sealed off by barricades. Those barricades have since been removed. And until just a few years ago, along one of the city’s main streets, they were not allowed to exit their homes through the front door. Rather, they were forced to climb up onto their roofs and jump along the roofs of their neighbors to exit through a back way. Those restrictions are no longer enforced either.

By midday, the temperatures are shooting up and it becomes difficult to stand outside in the unshaded street. So Muhanned Qafesha, a local journalist and an activist in Youth Against Settlements – a Palestinian organization that advocates nonviolent resistance against the occupation, comes to brief the rabbis in their air-conditioned bus. The walk from his office to the bus should have taken all of four minutes, but after being held up at a military checkpoint, as he explains while apologizing for the delay, the trip took four times as long.

“You people don’t live here in Hebron, like I do,” he laments. “You come from America and from Israel, but because of the occupation, ironically, you have more rights in this city than I do.”

Rabbi Daniel Burg, a Conservative rabbi from Baltimore, has visited the West Bank before but had never been to Hebron. “What was most eye-opening for me,” he says on the trip back, “was all the minutiae – how from street to street, neighborhood to neighborhood, decisions are made in various offices that have such a profound effect on the lives of individuals here.”

His primary motivation for signing up for the trip, he says, was his deep curiosity about Breaking the Silence. “I was intrigued to find out whether they deserve all the vitriol coming their way,” Burg explains. “Instinctively, I felt that they didn’t, but I wanted to find out for myself.”

His conclusion? “If this young woman leading our group today is representative, then I would say it’s a very important organization.”

Rabbi Michael Adam Latz, who runs a progressive congregation in Minneapolis, called the Hebron tour “eye-opening and heart-wrenching.” Clearly there have been “terrible acts of heinous violence” on both sides – Israeli and Palestinian, he says. “But Israel is the occupying force here, and for me, that is deeply deeply distressing.”

On the way back to Jerusalem, the rabbis stop at a hotel in the Palestinian town of Beit Jala, just outside the city, to collect their thoughts and share impressions. “For me,” says Stephanie Kramer, a Reform rabbi from Santa Rosa, California, “every time I heard the term ‘sterile’ used to describe a street, it was really painful.” Some of the other rabbis nod their heads in agreement.

SaraLeya Schley, a rabbi and gynecologist from Berkeley, California, says she would have liked to have heard other voices as well. “I found my heart continually breaking,” she tells the group, “but it would have been good to hear from the settlers as well – to hear from them why they are there.”

Kramer responds that for her, the trip would have achieved better balance had the IDF been able to present its side as well. “I would hate to hear that there are things, besides security considerations, that are guiding them,” she says.

Another rabbi challenges his colleagues to step back for a moment and consider the settler claims. “Doesn’t a people that has returned to its homeland have a right to live where it chooses?” he asks them. “Isn’t that a moral right?”

Ending their discussion, the Orthodox rabbi wonders aloud how best to share his experiences with his community back home. “I’m going to have to figure out how to talk to them about the occupation without actually using that word,” he says.

Judy Maltz is a Ha’aretz Correspondent