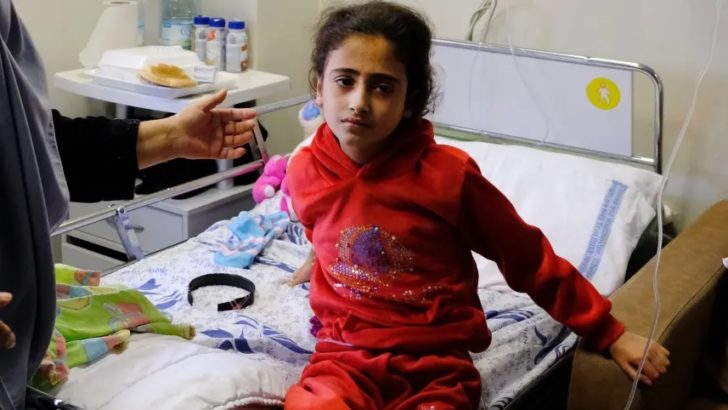 The parents of children with cancer are among those who are being denied travel permits by Israel. Miral Abu Amsha, a 10-year-old suffering from leukemia, is undergoing chemotherapy in a Nablus hospital by herself. And she’s not the only patient in that situation.

Join IAK in demanding an end to this!

Reposted from Ha’aretz by Gideon Levy and Alex Levac

[UPDATE: On March 6, 2020, Miral Abu Amsha succumbed to her cancer and passed away.]

The look on Miral’s face says it all: the anguished features of a little girl, a study in pain. There are balloons in the room, dolls on the bed, and a grandmother by her side – but Miral’s face bespeaks suffering. Occasionally, she is on the brink of tears, but holds back in order not to cry in front of strangers. But at some point, she can no longer contain herself and begins to weep. She’s sitting on the bed, the chemo tube attached to her arm, dripping the liquid directly into her vein.

Miral Abu Amsha is a 10-year-old girl with leukemia. She’s been hospitalized for two weeks in Najah University Hospital in Nablus, in the West Bank, undergoing aggressive chemotherapy treatment that is expected to continue for another four months at least, and her father and mother are not at her side. Her parents are far away, in Gaza City, beyond the hills of darkness.

Miral misses them, Miral is sad, Miral barely speaks. Her grandmother who has been allowed to be with her, is in despair, imploring the Israeli guests who have suddenly entered the room to help.

It’s not difficult to imagine what the child’s parents, in the prison that is the Gaza Strip, are going through, hearing the weeping of their little girl every day over the phone and unable to help – not to be by her side, not to hug her, caress her, tend to her in her suffering. You don’t have to be an oncologist or an expert in the psyche to know that the mental condition of a youngster hospitalized far from his or her parents affects the prospects of recovery. There are studies that have concluded as much.

This could well be the saddest place in the occupied territories. Every children’s ward in every hospital is a sad place; the rooms of children suffering from cancer are sadder still. But the rooms of children from Gaza who are suffering from cancer and hospitalized here at Najah in Nablus – where many are cut off from their parents at such a terrible time – are truly heartrending places. It’s hard to spend any length of time here. The atmosphere of distress and helplessness is unbearable. A portrait of the essence of Israeli evil.

Physically, the scene resembles any children’s ward in a modern hospital: colorful paintings on the walls, a playroom, a classroom for those hospitalized for long periods, spacious rooms for no more than two patients, comfortable armchairs for the family – everything that could help relieve a child’s suffering. But this week there were seven children from the Gaza Strip here, and only two were with their mothers. As for fathers, dream on. Israel’s “security” considerations, you know.

Most of the children were with their grandmother or aunt, and in some cases with a woman they didn’t know – whatever person was able to get an exit permit from the Gaza prison. All these children are here, in the West Bank, in an area supposedly under the full control of the Palestinian Authority, without their parents – by order of Israel – because no treatment is available for them in Gaza under the siege conditions there.

We were in this hospital two years ago, when the director was Prof. Selim Haj Yehia, a heart and transplant surgeon of international renown from the Israeli city of Taibeh, whose brother, Samer Haj Yehia, is the board chairman of Israel’s Bank Leumi. Haj Yehia was compelled to resign and was replaced by Gaza-born Dr. Kamal Hijjazi, who escorts us together with the hospital’s chief executive medical consultant, Dr. Walid Khoury, a resident of Jordan.

Both men are very cordial. Hijjazi makes a point of picking up every piece of paper he finds in his hospital’s otherwise clean corridors. Nada, a girl of 3 from Gaza’s Shati refugee camp, was the first patient we met. She’s lucky: Her mother is with her.

Miral’s grandmother, Shafiqa, is begging for the girl’s mother, Donia, to be allowed to leave Gaza and replace her here. Donia has been denied a permit for security reasons. She’s undoubtedly a dangerous terrorist.

Bisan Sukar is also here without her parents. She’s 4 years old and her hair is thinning out from the treatments. Her grandmother, Zahiya, 71 years old, is tending to her with what little strength she has. Mom and Dad are far away. There was one occasion when her mother was allowed to accompany her, but this time her request was rejected. It’s hard to escape the feeling that this is arbitrariness and cruelty for their own sake.

The nurses try to fulfill the role of the absent mothers, but not always successfully. Some of them wear masks to avoid infecting the youngsters whose immune systems have been weakened or eradicated. Dozens more children are treated here as outpatients; many of them are also from Gaza and are living, with their mothers or without them, in apartments that the hospital rents for them.

A new report by the Israeli branch of Physicians for Human Rights shows that every year there are hundreds of cases of sick children from the Strip who are sent for medical treatment outside Gaza without their parents, because the Israeli authorities refuse to issue them an exit permit. According to the report, between October 2018 and July 2019, 21 percent of the children who were compelled to leave Gaza for medical treatment were unaccompanied by their parents. The average monthly number of exit permits for sick children issued during that period stood at 536, of whom only 420 were able to leave with one of their parents, usually their mothers. The other 116 children had to travel and be hospitalized without either parent. These figures were provided to PHR by the office of the Coordinator of Government Activities in the Territories after two requests were submitted under Israel’s Freedom of Information Act.

But not all the sick children receive a permit to leave Gaza for medical care. Four-year-old Rim Ahal was seriously injured last May when she accidentally drank sulfuric acid, which wreaked havoc on her internal organs. Rim gets her food through tubes and is in constant pain; her father has to take her to Rantisi Hospital in Gaza City every two days to have the tubes replaced. Since the accident, the family has submitted a number of requests for Rim to travel with her mother or her grandfather to Najah Hospital, where her condition can be ameliorated – but the District Coordination and Liaison Office didn’t bother to respond to the family’s requests or to others, from PHR. This week the request was rejected officially.

A spokesman for the Coordinator of Government Activities this week stated, in reply to a query from Haaretz: “As was explained to the Palestinian Civil Committee in the Gaza Strip, Donia Abu Amshi’s request was rejected because mistaken details were found on her application forms. To date the correct details have not been completed [sic], nor has a new request on the subject been submitted – and when it is received, it will be examined on an individual basis like all requests.

“In addition, Rim Ahal’s request was rejected by the DCL in Gaza because mistaken details were found on the application forms of the escort who was supposed to go with her for the medical treatment – and therefore his request could not be approved. We would like to note that under DCL policy, permits for children cannot be issued without an adult escort.”

There are sick youngsters who do receive a permit to leave Gaza for medical treatment, but who cannot withstand the long, grueling ordeal at the checkpoints. That was the case with Abdul Rahim Shurav, a toddler who was suffering from an illness that caused him shortness of breath and choking. He received a transit permit, and the staff at Najah Hospital prepared for his arrival, in serious condition. But during the trip there, while being transferred from one ambulance to another, the 2-year-old died, on November 26.

Not only children have to cope with their sickness alone, at Najah. We visit Mohammed Tabash, 31, a cancer patient, who is lying alone in the surgical ward, staring sadly at the ceiling, far from his wife, his two children and any other family member. They are in Khan Yunis, in the Gaza Strip, and he is here, in a hospital located high on Mount Ebal, undergoing a rigorous regimen of chemo all by himself. A white piquet blanket covers him; a tube is attached to his arm. An unemployed man, during the year before he fell ill, Tabash volunteered as a paramedic in the Red Crescent organization during the weekly March of Return demonstrations along the fence that locks Gaza in. Half a year ago he started suffering from chills and his temperature rose. He was diagnosed with leukemia at the European Gaza Hospital, which referred him to Najah.

Tabash’s request to travel to Nablus was approved, and he was moved here by what’s called the “roll on/roll off system,” from ambulance to ambulance – three ambulances, all together – from his home to the Erez checkpoint, then to the Qalandiyah checkpoint, and from there to the hospital in Nablus. The authorities permitted Tabash’s father, Khalil, who is 60, to accompany him.