You Are Here: Home → Fundraising gala: does the IDF really need another $37 million? 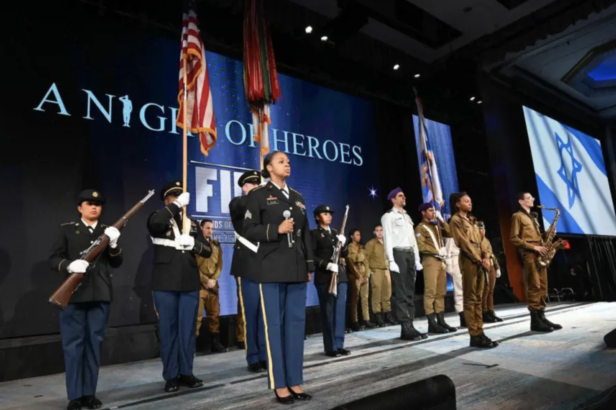 Friends of IDF Gala: US and Israeli soldiers together onstage at the 2019 FIDF National Gala in NY. (photo credit: SHACHAR AZRAN)

The Friends of the IDF gala Wednesday raised a small fortune for the Israeli Defense Forces (IDF) – a military machine that uses American aid to kill and maim.

The Jerusalem Post reported yesterday on a New York gala fundraiser by Friends of IDF (Israeli Defense Forces, the Israeli military). The event raised $37 million, which will be used to

provide services such as academic scholarships to combat veterans; financial assistance for soldiers in need; support for lone soldiers throughout their service and upon release; crucial aid for wounded veterans and the families of fallen soldiers; and weeks of rest and recuperation for entire IDF units, as well as educational, cultural and recreational facilities.

Rabbi Peter Weintraub of Westchester, New York was the the event’s chairman for the fifth year in a row. He said of the event

The heroes of the IDF serve and protect the State of Israel, its people and Jews around the world. During this very special evening, our community was able to come together to pay tribute and show the brave IDF soldiers our profound appreciation and thanks for their sacrifices. We stand together with these young Jewish heroes – our heroes – and declare: While their job is to look after Israel, ours is to look after them.

Such galas are held annually around the United States, with 20 chapters throughout the U.S. and Canada. In 2017 the group raised almost $54 million in a star-studded gala in Hollywood.

Even before the recent gala, the group had assets of over $190 million. Donations to it are tax-deductible in the U.S., although is unclear why donations to benefit a foreign military should reduce one’s financial obligation to the United States.

But the real news here is not the gala, its celebrity guests, or its success in fundraising. The real news is the CONTEXT.

Friends of IDF isn’t what it says it is

The Israeli government is responsible for training IDF soldiers and providing them with the necessary tools for their service. FIDF is committed to providing these soldiers with love, support, and care to ease the burden they carry on behalf of the Jewish community worldwide.

FIDF’s assumption, that the Israeli military represents the global Jewish community and works on its behalf, is deeply problematic.

Ali Abuminah suggests a major reason why pro-Israel groups would make such a claim: to inoculate the IDF from criticism. If Israel (and the IDF) represents all Jews, then criticism of Israel (or the IDF) can (and often is) construed as anti-Semitic.

The fact is that while most mainstream Jewish groups actively support Israel, many Jewish individuals and some groups, such as the American Council for Judaism, have long opposed its actions. In fact, when the movement to create Israel began in the late 1800s, the majority of Jews around the world did not support it, and some actively opposed it.

IDF isn’t “the most moral army in the world”

A quick skim through the following headlines (click each for the full story) is just a sampling of the everyday behaviors of this army (for a more exhaustive list, visit IMEMC, which reports on many of the “small” daily stories):

Jonathan Cook discusses a handful of additional stories from IDF’s hall of shame, including dozens of extrajudicial killings, as well as several examples of Israeli military cover-ups and lies. These are the tip of a massive iceberg of both cruelty and deception.

The United States has laws to prevent our government from funding gross human rights violators – the Leahy Laws – but they have yet to be applied to Israel.

The IDF is already flush with cash

Israel receives $3.8 billion a year in military aid from the US – 54% of all military aid handed out around the world – for a country with roughly the same size and population as New Jersey.  Legislation currently before Congress would guarantee Israel a minimum of $38 billion over the next 10 years. This works out to $23,000 per Jewish Israeli family of four.

the largest cumulative recipient of U.S. foreign assistance since World War II. To date, the United States has provided Israel $142.3 billion (current, or noninflation-adjusted, dollars) in bilateral assistance and missile defense funding. Almost all U.S. bilateral aid to Israel is in the form of military assistance.

Certainly the $37 million raised by Friends of the IDF could have been better spent elsewhere in the world, rather than on an army that already receives massive aid and uses it to oppress and kill?