You Are Here: Home → Frontline says it may never broadcast the Gaza documentary 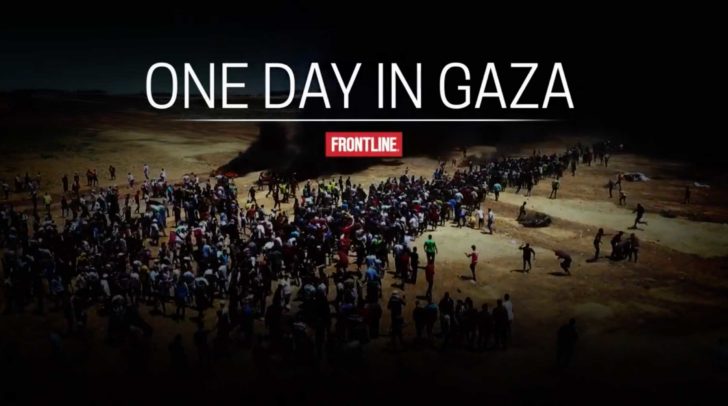 First, PBS’s flagship TV program, Frontline, said it had only temporarily cancelled a riveting documentary on Gaza that was to be shown nationwide. Now Frontline admits it may never show it. Originally, the taxpayer-funded TV program was trying to take full credit for the film, now it’s trying to disown it. (Scroll down below to see our video of it)

PBS’s Frontline says it may never broadcast a powerful new documentary about Gaza that it bumped from approximately 300 PBS stations around the country. PBS calls Frontline its “flagship public affairs series.”

The film, billed as Frontline: One Day in Gaza, had been scheduled to be broadcast nationwide on May 14, 2019, the one-year anniversary of the deadly day it portrays. Instead, viewers found a slightly updated Frontline film about Robert Mueller that had been broadcast in March and had been online ever since.

When disappointed viewers called PBS/Frontline, located at Boston’s WBGH station, to find out what had happened to the Gaza documentary, they were told that the scheduled broadcast had simply been preempted. One Day in Gaza, they were told, would be screened sometime in the coming months.

Now Frontline, according to an email from spokesperson Pam Johnston, says that PBS may never broadcast it…. or that if it does, it may screen a different version.

Johnston’s email was in response to an article I had written about the documentary, which discussed Frontline’s action. In her email to me, Johnston wrote: “If and when we decide to broadcast a version of ‘One Day in Gaza,’ it will be announced through PBS and PBS stations, our website, newsletter and across our social channels.”

Yet, nowhere in PBS’s copious announcements for the film could I find a single instance in which PBS called it a “BBC documentary.”

In fact, all its announcements make it appear that it is a Frontline documentary. Its promotional video for the program specifically says: “Frontline investigates what happened one day in Gaza.”

(While PBS has since removed its promo, the video is still on some PBS stations’ websites and YouTube channels, including WLRN, WTVIPBSCharlotte, and South Florida PBS). 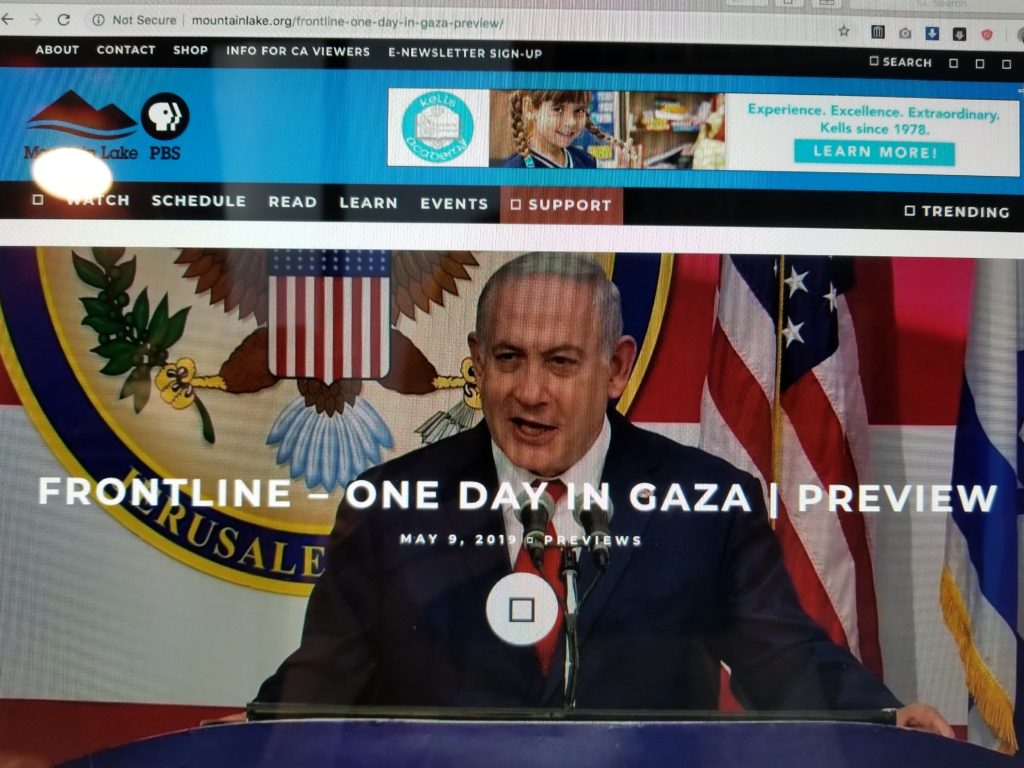 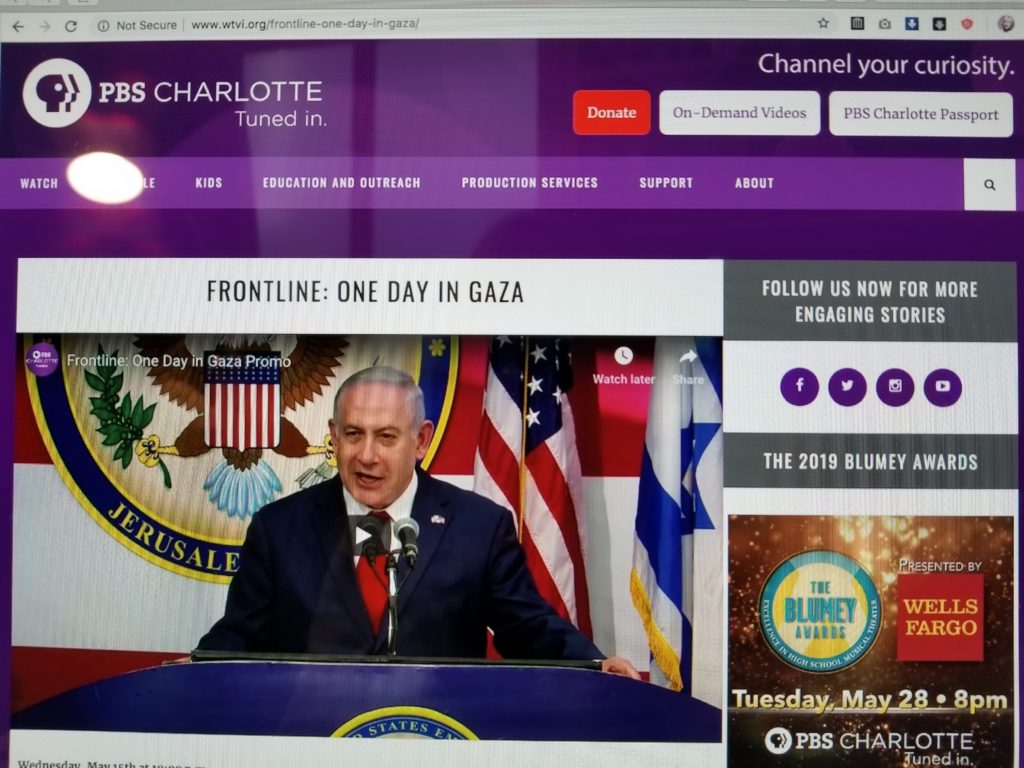 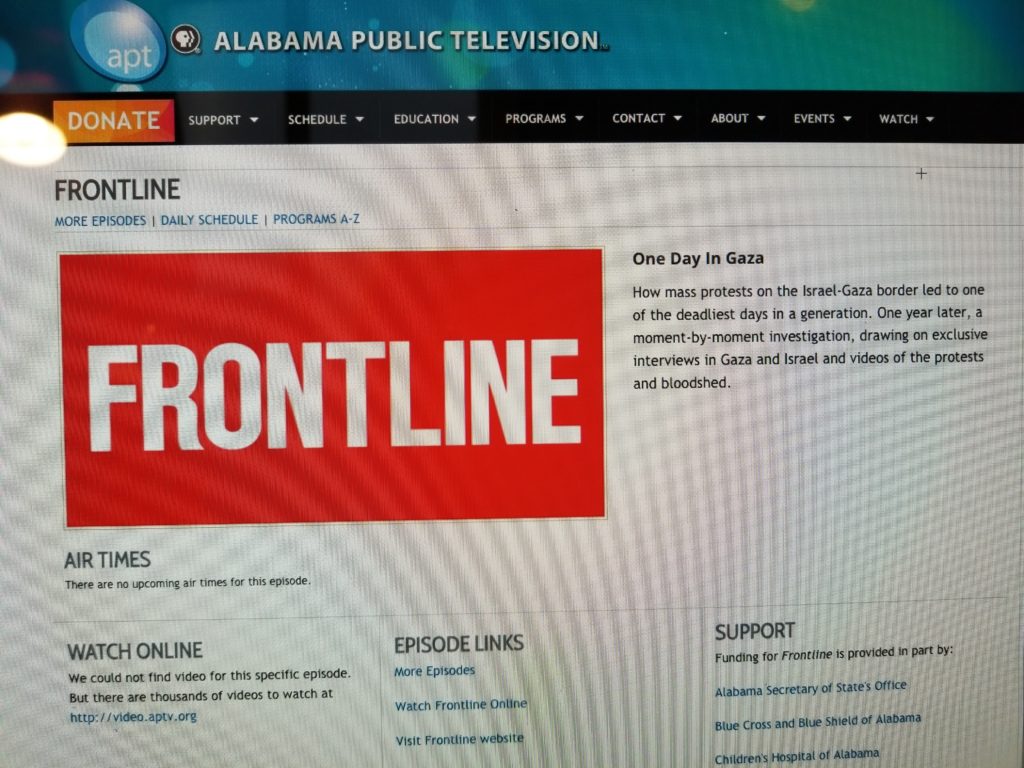 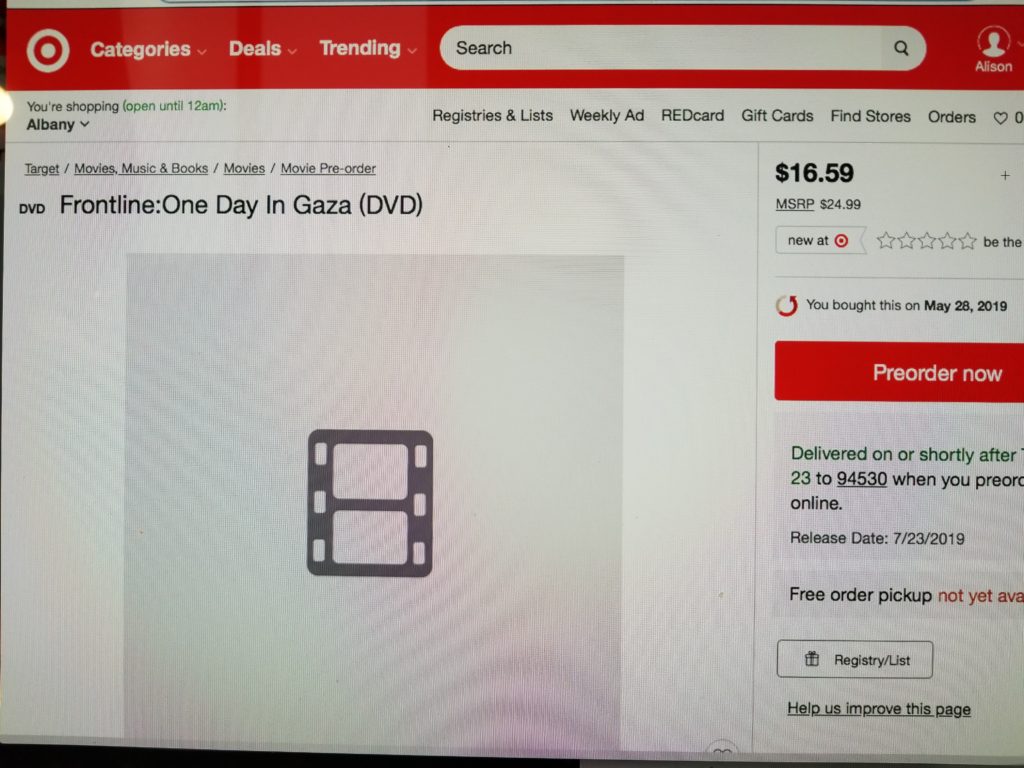 In my phone and email exchanges with Johnston before my article, she never suggested that the film was not a Frontline documentary. My very first email to her had specifically said: “I’m working on a story about the non-broadcast of the Frontline documentary ‘One Day in Gaza’ that was scheduled for yesterday…” Johnston’s response to my email did not contain the “correction” that she now suddenly demands.

After Johnston sent me her perplexing email, I’ve tried to learn the true situation, and to discover to what degree American taxpayer money went to the project. I responded to Johnston’s email with two questions:

1. What was the PBS/Frontline relationship to the project?

2. How much money did PBS/Frontline provide to BBC for it?

When Johnston didn’t answer, I sent the same questions to PBS-Frontline management and added a third question:

3. If no money has yet been disbursed, how much was expected to be allotted for it?

Johnston and others have refused to provide this information despite follow up emails and phone calls.

BBC broadcast it in UK

The BBC says the film was made “for BBC and WGBH/Frontline.”

While Frontline had canceled its broadcast to Americans, BBC had screened the documentary on May 13 in England. It is now available for download from the BBC website for the next 11 months – but only if you’re in the UK. People elsewhere, including in the United States, can’t view it.

Since the US gives Israel over $10 million per day, it’s extremely important that Americans be well informed on Israel’s actions. Accordingly, our nonprofit organization, If Americans Knew, works to inform Americans fully on Israel-Palestine. We particularly focus on information largely omitted by U.S. media.

As part of this mission, we have worked to make the documentary’s information available to Americans through a video we created.

One Day in Gaza contains much profoundly powerful footage of the type that caused Americans to change US policies in Vietnam. Among other things, it shows footage of Israeli snipers intentionally shooting unarmed individuals in the head, including a young teenaged girl.

At the same time, however, the film leaves out some important information and often tilts toward the Israeli narrative. I detail this in my article, and we added some of it to our video, with a link to the article.

We uploaded this video to YouTube and Vimeo. It didn’t last long.

A few hours before Johnston sent her email to me claiming the film is not a Frontline documentary and saying: “It is a BBC documentary,” BBC had filed a copyright violation claim against our video.

Both YouTube and Vimeo immediately removed it. (BBC has not contacted us about our video.)

Americans have the right to see it

We feel that we have the right under U.S. Fair Use law – and the obligation, under our mission statement – to post this video. People in the UK can see this footage; we feel that Americans, whose tax money funds PBS as well as Israel, also have the right to see it.

The very first Senate bill of 2019 proposes to send Israel a minimum of $38 billion over the next 10 years. That is approximately $23,000 per Israeli family of four, and works out to over $7,000 per minute. In addition, US wars promoted by Israel partisans have cost the U.S. trillions of dollars.

Surveys show that most Americans already think we give Israel too much money. If Americans see this documentary, despite its sometimes pronounced pro-Israel spin, it’s entirely possible that many Americans will demand that politicians stop sending our tax money to Israel.

In fact, Frontline reports that its shows have sometimes “spurred both policy and social change.”

Perhaps that’s why whoever is in in charge at PBS/Frontline pulled the show. This action has prevented Frontline’s 4.6 million viewers around the United States from seeing the documentary’s revealing footage on their TVs.

However, our video is now back online on Bitchute (be patient – Bitchute videos sometimes takes a few minutes to start playing).

Americans who dislike censorship and who feel we have the right and the need to be fully informed on Israel-Palestine, can download the video from there, at least for now, and share it with others.

UPDATE: We’ve just learned that our video is also now on archive.org.

Top photo is a screenshot from the video “Frontline: One Day in Gaza – Preview” posted on the Mountain Lake PBS website and on its YouTube channel.

Palestinian refugees and the right of return