You Are Here: Home → France prevents Gaza-bound flotilla from docking in Seine 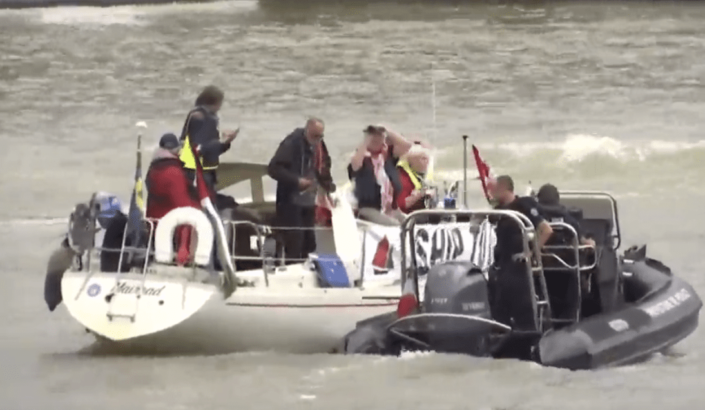 As the “freedom flotilla” vessels made their way to Gaza with humanitarian aid, they encountered unexpected trouble: in spite of being thoroughly searched by French police, 2 of the boats were forbidden from docking. “[We] didn’t know that Israeli waters now begin in the Seine,” commented one passenger.

Police in France have prevented two boats from a Gaza Strip-bound flotilla from docking in Seine River, despite subjecting the vessels to extensive searches in advance.

The boats and two other vessels are part of the Freedom Flotilla, which is to set sail for Gaza in the hope of breaking Israel’s siege of the coastal enclave.

The river police confronted the vessels on Sunday as dozens of pro-Palestinian activists were celebrating the flotilla’s imminent departure and chanting “Stop the massacre of Palestinians.”

The honorary president of the France-Palestine Solidarity Association (AFPS) Taoufiq Tahani confirmed that the boats had undergone a thorough inspection.

“We were unfortunately surprised and didn’t know that Israeli waters now begin in the Seine (river) in Paris. That’s unimaginable,” he said sarcastically.

The flotilla’s vessels are to meet in the Mediterranean before attempting to approach the Gaza.

Gaza, which hosts roughly two million Palestinians, is facing a humanitarian crisis, driven by Israel’s siege of the territory, and its incessant attacks and wholesale wars. The United Nations has said the enclave could become “uninhabitable” by 2020.

The enclave has suffered three Israeli wars, and is subject to almost daily airstrikes by the occupying regime.

On May 31, 2010, Israeli commandos attacked one such flotilla in international waters in the Mediterranean, killing 10 activists.

The flotilla was attempting to break the siege and take aid to the Palestinians.