You Are Here: Home → Did Israeli ambassador dictate the AIPAC speech Jared Kushner wrote for Trump? 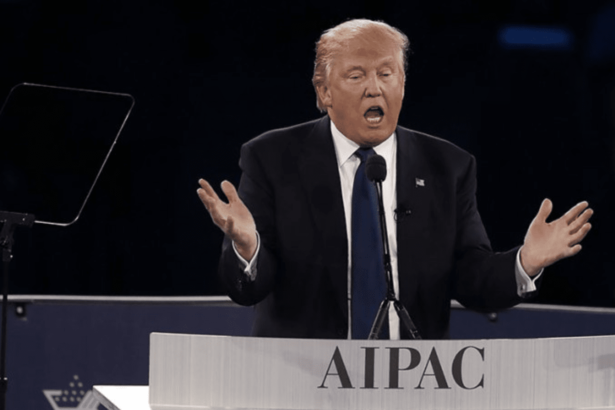 According to just-released “Born Trump” by Emily Jane Fox, Donald Trump’s 2016 speech to AIPAC was essentially stolen from then-Israeli ambassador Ron Dermer during a phone call with Jared Kushner. Trump was literally a mouthpiece for Israel, either unwilling or unable to craft his own policy.

by Alyssa Fisher, The Forward

It appears Jared Kushner may have lifted a speech he was credited for writing for President Trump from a foreign source.

According to a new book, “Born Trump” by Vanity Fair’s Emily Jane Fox, Israeli Ambassador Ron Dermer essentially dictated Trump’s speech for Kushner, who then loaded it into the teleprompter ahead of the 2016 AIPAC Policy Conference, Politico reported Sunday.

On a call with Kushner leading up to the speech, directed toward the staunch Jewish lobbying group, Dermer “talked for a solid hour about the U.N., about Iran, about hard lines and language that was very important to the Israelis, and about many people who would be in the audience that day,” Fox wrote.

The next day, Kushner sent a copy of the speech to Republican megadonor Sheldon Adelson for review. Adelson then forwarded it back to Dermer. “The text Dermer read was like a transcript of what he had told Jared in their phone call, right down to the jokes,” Fox writes.

Dermer admitted that he briefed Kushner but denied that the senior adviser took his talking points. “The suggestion that I dictated Trump’s AIPAC speech to Jared Kushner is ridiculous,” Dermer said in a statement to Politico.

Fox writes that Kushner was angry about that gaffe and looking for someone to blame.

At a hotel gym in Cleveland, he approached a campaign staffer and told him, “This was all [campaign chairman Paul] Manafort’s fault,” according to the book, out Tuesday. A month later, Manafort was fired, replaced with Kellyanne Conway.