You Are Here: Home → Forward: Could Menendez Trial Cost AIPAC A Pro-Israel Vote? 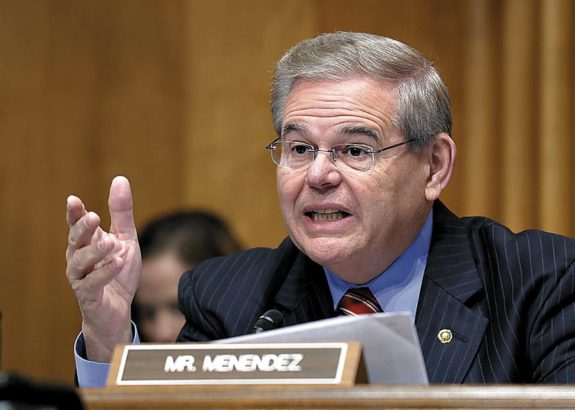 The trial of New Jersey Democrat Senator Bob Menendez, indicted two years ago on corruption charges, is set to begin Sept. 6 in a federal courthouse in Newark.

The political future of one of Israel’s staunchest supporters is on the line in a New Jersey courtroom — along with the political power balance in the U.S. Senate.

Sen. Bob Menendez, a New Jersey Democrat, is now at the opening stages of his criminal trial for corruption charges involving his ties to a Jewish eye doctor from Florida. With the jury selection process already completed and a trial scheduled for September, the verdict in the case could come in late November.

Timing is crucial for Democrats following the Menendez case.

If he is found guilty and pushed to resign before January, his successor will be determined by the outgoing Republican governor, Chris Christie. The deeply unpopular Christie would likely appoint a Republican or could even name himself to fill the seat.

But if the trial is delayed or Menendez hangs on until after Christie leaves office in January, a newly elected Democratic governor might be the one who gets to appoint a successor. Democrat Phil Murphy is considered the front-runner in the bright-blue state.

A replacement would stay in office till November 2018. As demonstrated in last month’s vote on repealing Obamacare, even one vote could be decisive for Democrats seeking to block Republican legislative efforts.

The good news for Democrats: Menendez is not under any obligation to resign immediately if he is convicted.

Menendez’s uncertain future is also of serious concern for the pro-Israel community. A hawk on all issues relating to Israel, and a prominent member of the Senate Foreign Relations Committee, Menendez is also a top recipient of pro-Israel political action committee money, racking in $341,000 in 2012, the last time he sought re-election.

During the 2015 debate over the Iranian nuclear deal, Menendez was one of just four Democrats who sided with the Israeli government, against President Obama, in opposing the deal. He is considered a close ally of the American Israel Public Affairs Committee and a safe vote on pro-Israel issues. He is currently a co-sponsor of the AIPAC-backed anti-BDS bill, which has already lost several Democratic supporters following claims that the legislation would infringe on free speech of those wishing to boycott Israel.

Menendez was also the only Democrat to vote to confirm David Friedman as President Trump’s pick to be ambassador to Israel.

Menendez’s replacement might not be such a strong supporter of Israel, whether the next senator is a Democrat or a Republican.

Menendez is facing charges of bribery, conspiracy and false statements for using the power of his office to assist Salomon Melgen, a Florida eye doctor who has donated to Menendez, accused of Medicare billing fraud. Menendez, according to the charges, tried to assist Melgen keep his $500,000 power security contract as well as providing entry visas to three women companions of Melgen. In return, Melgen allegedly provided $750,000 in donations to Menendez.

Menendez has denied all charges and, according to reports, is not interested in entering a plea agreement.