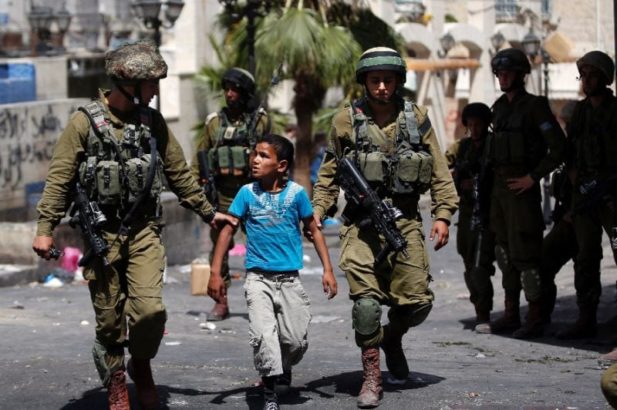 Israeli soldiers arrest a young Palestinian boy in the West Bank town of Hebron, June 20, 2014. The ADL (Anti-Defamation League) is a strong supporter of Israel.

In the wake of Charlottesville, numerous Americans have come forward to oppose racism in a variety of ways. In some cases this has taken the form of donations.

As a result, some allegedly anti-racist organizations have seen a financial bonanza. The main one seems to be the Anti-Defamation League (ADL), which saw a 1,000% spike in donations – more than half by first-time donors.

There’s one problem. The ADL is a major supporter of racism.

On its website, the ADL claims it works to “secure justice and fair treatment to all.”

Unfortunately, that is far from the truth. The fact is that the ADL works to maintain oppression and discrimination against Palestinian Muslims and Christians.

The ADL’s number two focus, listed right after its claim to speak out against “bigotry, discrimination and injustice,” is to “stand up for the Jewish State of Israel.”

Israel was created – as documented by Israeli historians and numerous others – by a war of ethnic cleansing of the Muslim and Christian population that originally made up the vast majority of the inhabitants.

Israel then instituted a system built on discrimination against Muslims, Christians, and other non-Jews.

For the past 69 years Israel has oppressed Palestinians in diverse ways, including confiscating their land, destroying their homes, killing numerous children, and imprisoning at least one member of 70 percent of all Palestinian families.

South African bishop and anti-apartheid activist Desmond Tutu wrote: “I know firsthand that Israel has created an apartheid reality within its borders and through its occupation. The parallels to my own beloved South Africa are painfully stark indeed.”

In addition, Israel has waged wars of aggression against Egypt, Syria, and Lebanon. It has urged wars against Iraq, Iran, and others.

And during all this time the ADL has been in the forefront of supporting Israel. It has also used its $57 million budget to smear those who support fairness, justice, and equality for Palestinians.

The fact is that the ADL is a nonprofit organization without accountability that raises money through claims of rising anti-Semitism, even though at times these claims are questionable. It uses a distorted definition of anti-Semitism that includes many statements critical of Israel, and works to block events about Palestine on campuses.

The sad fact is that donations to the ADL, rather than fighting racism, will be used to enable it.

People may wish to ask for their money back and give it to someone who actually helps people – and whose executive director isn’t paid close to half a million dollars.

Israeli soldiers beat an unarmed Palestinian during a West Bank protest in June 2015.

Alison Weir is executive director of If Americans Knew, president of the Council for the National Interest, and author of Against Our Better Judgment: The Hidden History of How the U.S. Was Used to Create Israel. Her bio is here. This article was originally published by MintPress News.

America’s Militarized Police – Made in Israel?

A Modest Proposal to the Anti-Defamation League