You Are Here: Home → FAIR: The NYT’s Pro-War Arguments Against War With Iran

FAIR: The NYT’s Pro-War Arguments Against War With Iran 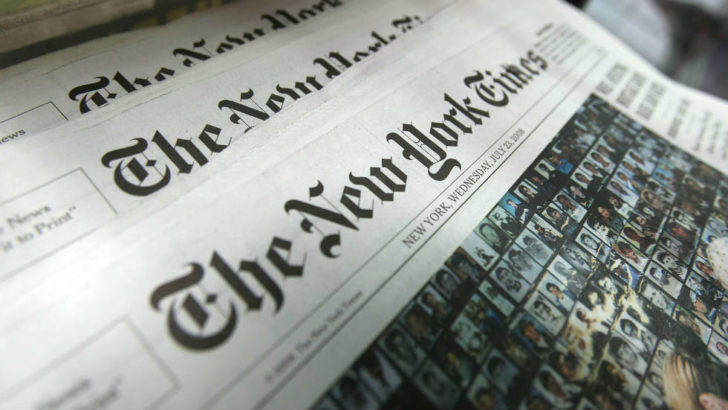 The New York Times, winner of 127 Pulitzer Prizes, and considered the industry’s “newspaper of record,” is not being honest about the US-Iran conflict.

New York Times recent editorials make it sound as if the war looming between the US and Iran is equally the fault of both countries, or of some inexplicable, inevitable force, rather than the result of US actions. This framing makes it harder for the public to judge intelligently where to place blame.

by Gregory Shupak, reposted from FAIR, Fairness and Accuracy in Reporting

The New York Times has published five editorials since the beginning of May that are ostensibly critical of a possible military war between the United States and Iran. As anti-war arguments, however, they are woefully lacking—vilifying Iran without subjecting the US to comparable scrutiny, and hiding US aggression towards Iran.

The editorials regurgitate the same anti-Iran demonology that pro-war voices offer to try to justify an attack on the country. In one case (5/4/19), readers are told that

there is no doubt that the Revolutionary Guards is a malign actor. Founded in 1979, it was the revolution’s protector. In time, the corps became a tool of violence and military adventurism as Iran expanded its regional influence in Iraq, Lebanon, Yemen and Syria.

The same editorial implies that Iran has a nuclear weapons program about which Americans should be concerned, writing:

The administration has fiercely debated imposing sanctions on European, Chinese and Russian entities working with Iran to convert facilities capable of pursuing nuclear-weapons related activities to more peaceful, energy-oriented projects. On Friday, the State Department announced that while work at three key facilities will be allowed to continue for 90 days, the administration will reconsider the decision at the end of that period. Some other nuclear-related activities will be prohibited.

Saying that Iran has “facilities capable of pursuing nuclear-weapons related activities,” which should be “convert[ed]” so that they can work on “more peaceful, energy-oriented projects,” strongly implies that Iran has a nuclear weapons program or is close to having one, as does an editorial (7/19/19) that claims Iran has “nuclear ambitions.” There is no basis for this insinuation: Iran has no nuclear weapons program, hasn’t been close to having one since at least 2003, and perhaps never has. (See FAIR.org, 10/17/17.)

The series of editorials in this series, furthermore, describe Iran as doing (presumably nefarious) “work on missile systems” (7/19/19), and as “a despotic Middle East regime” (6/20/19) that provides “support for regional terrorist organizations” (7/19/19).

No US institution or practice is sweepingly condemned in a comparable fashion. Carrying out an invasion of Iraq, as the US military did, and causing as many as a million deaths is not considered the conduct of a “malign actor” or “a tool of violence and military adventurism”; nor is keeping children in cages or having the world’s largest prison population evidence of a “despotic…regime.” Whatever the Times’ definition of “support for regional terrorist organizations” is, it evidently does not include backing racist groups in Libya, laying waste to Syrian cities or flooding the country with weapons that helped ISIS, or carrying out massacres in Afghanistan, or underwriting brutality in Yemen and Palestine.

In this respect, the Times’ apparent anti-war editorials bolster the case for war against Iran: If Iran is a “despotic . . . regime” that provides “support for regional terrorist organizations” and has a military outfit that is “no doubt . . . a malign actor” and a “tool of violence and military adventurism,” readers can be forgiven for failing to rush out and organize a peace movement. And if the United States is or has none of these things—or, in the case of a nuclear weapons program and “work on missile systems,” is presumably allowed to have them—they may be confused about why the US shouldn’t bomb or invade Iran, or overthrow its government, or some combination of these.

The editorials also muddy responsibility for the crisis, presenting what is happening as roughly equally the fault of the United States and Iran. The first editorial (5/4/19) argued that the “Trump administration is playing a dangerous game in Iran, risking a serious miscalculation by either side.” The problem isn’t so much the risk of “a serious miscalculation by either side” as it is deliberate US calculations to inflict misery on Iranians in an effort to force Iran to submit to US orders. US sanctions are severely harming Iranians, causing food shortages, undermining the healthcare system, preventing flood relief from getting to Iranians, setting off a collapse in economic growth and driving the country into a deep recession while helping to push up inflation; all of this information was publicly available before any of these editorials were published. Iran, of course, has done nothing comparable to US society.

The title of the next in the series was “Iran and the US Are on a Collision Course” (6/14/19), and it said that “hard-liners on both sides have little interest in any diplomatic off-ramp.” In the weeks leading up to this article’s publication, the US sent B-52 bombers, drones, Patriot anti-missile batteries, reconnaissance aircraft, and air and missile “defense” systems to Iran’s doorstep—alongside 1,500 troops, on top of the 60–80,000 fighters the US admits to having in the area, to say nothing of the thousands more US forces in the region’s seas. If the two countries are on a “collision course,” it’s because the US is driving its vehicle directly into Iran’s.

Similar, the subsequent editorial (6/20/19) contended that,

with opposing military forces in such proximity, with accusations and munitions flying and with the White House facing a trust deficit, the danger of open conflict increases by the day.

What this elides is where these forces are in proximity and why: They are close to each other in Iran’s immediate vicinity, where Iranian military equipment and personnel are naturally located, and where US weapons, spy equipment, soldiers, sailors and pilots have provocatively been sent. This is the reason that “conflict increases by the day”; at last check, Iran does not have any weapons, or land, sea or air forces off the US coast.

In the Times’ fourth editorial on the subject (6/21/19), the authors wrote that the

risks of conflict are now growing sharply. Even if the two governments are not ready for diplomacy, at the very least such a connection could help ensure that the many military assets arrayed around one of the world’s most vital shipping lanes don’t ignite a war.

Wars don’t spontaneously combust, nor do the “risks of conflict . . . [grow] sharply” on their own. These dangers have come about because “the many military assets arrayed around one of the world’s most vital shipping lanes” include those of Iran, which are in the vicinity because that’s where Iranians have the audacity to live, and those of the US, which include more than 50 military bases surrounding Iran, more than 7,000 miles from American shores. Iran has a grand total of zero bases encircling the United States.

These editorials make it sound as if the US and Iran have been brought to the edge of war by immutable physical laws, rather than by conscious decisions the US ruling class has made. Framing the issue this way hides US government responsibility for the increased possibility of war. Occluding which party is at fault for a war or the possibility thereof makes it harder for the public to identity who needs to be mobilized against. This problem is particularly acute when it is the US paper of record obscuring the ways Washington is increasing tensions with Iran, and bringing the countries closer to a devastating war.