You Are Here: Home → Tulsi Gabbard’s ‘Road to Damascus’ that the media isn’t talking about 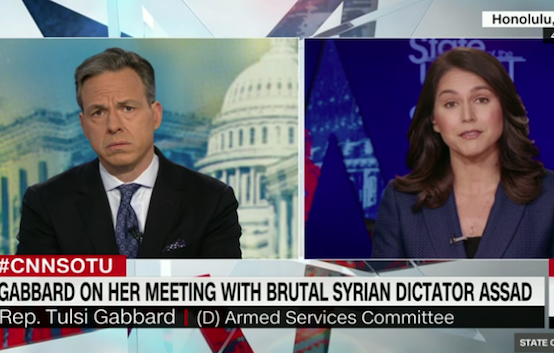 Tulsi Gabbard speaks to CNN’s Jake Tapper about her 2017 visit with Syrian President Bashar Assad back in January. (CNN/Screenshot)

There’s a good reason the presidential hopeful met with Assad, but the media doesn’t want to talk about it…

It was eight minutes of hell for Kamala Harris. Onstage at the second Democratic debate in Michigan, Harris was subjected to a blistering assault on her record as a California prosecutor at the hands of Hawaii Congresswoman Tulsi Gabbard.

Afterwards, Harris was asked about Gabbard’s attack by CNN’s Anderson Cooper. “Listen,” she replied, “I think that this coming from someone who has been an apologist for an individual, [Syrian President Bashar al] Assad, who has murdered the people of his country like cockroaches. She has embraced and been an apologist for him in the way she refuses to call him a war criminal. I can only take what she says and her opinion so seriously, so I’m prepared to move on.”

Harris was referring to a controversial four-day visit by Gabbard to Syria in early January 2017, during which she met with Assad. While Gabbard’s performance during the debate was stellar (her name was the most searched of all the Democratic candidates), Harris’s jab regarding Assad seemed like all the mainstream media wanted to talk about.

“When sitting down with someone like Bashar al-Assad in Syria,” MSNBC’s Yasmin Vossoughian asked Gabbard, “do you confront him directly and say why do you order chemical attacks on your own people? Why do you cause the killings of over half a million people in your country?”

Tulsi’s road to Damascus has become an issue in her bid for the White House. To better understand how she found herself in this position, one needs to go back in time, to April 2003, when, while serving as a member of the Hawaiian State Legislature, a 23-year-old Gabbard enlisted in the Hawaii National Guard, and was assigned as a Medical Operations Specialist to the 29th Support Battalion’s Medical Company. When her unit was mobilized for service in Iraq, Gabbard (who was not called up) volunteered to be deployed, because, as she told a reporter in 2004, “I felt it was my duty as a soldier and a friend to join them in the service of our country.”

Following six months of strenuous pre-deployment training, Tulsi Gabbard deployed to Iraq in early 2005 as part of the 29th Brigade Combat Team, an all-National Guard/Reserve unit. She and the rest of the 29th Support Battalion were deployed to Camp Anaconda, a sprawling U.S. facility situated on the grounds of Balad Air Base, north of Baghdad. At the time, Camp Anaconda was under such frequent attack by insurgent mortar fire that it had acquired the nickname “Mortaritaville,” a play on a Jimmy Buffet song of a similar title.

Mortar and rocket attacks became an ever-present reality for the young Hawaiian soldier. “Sometimes,” Gabbard told the Honolulu Advertiser, “we can go for days with no alarm siren going off, no attacks, and sometimes there can be many in one day…sometimes the attacks are so far away you can’t hear the explosion; other times so close that the ground and sky just seem to shake from the impact.” The feeling of helplessness was palpable: “all you can really do,” Gabbard said, “is say a silent prayer that you and your buddies are unharmed.”

While Charlie Med, as her unit was known, came through the deployment unscathed, 18 members of the 29th Brigade Combat Team were killed in Iraq, and scores more were wounded. “Every single day,” Tulsi Gabbard reminded her fellow Americans during the second Democratic debate in July, “I saw the high cost of war.”

The 29th Brigade Combat Team was deployed in Iraq at a time when Abu Musab al-Zarqawi, the leader of al Qaeda in Iraq, was engaged in an all-out war with U.S. forces. The casualties that Gabbard and her comrades endured were a result of “the fight that is ongoing every day in Iraq against these insurgent terrorists”; these losses, she noted, “we have felt in Hawai’i.” War for Tulsi Gabbard and her fellow soldiers wasn’t an abstraction, but an ever-present, horrible reality.

Gabbard returned from her year-long deployment a decorated combat veteran, having earned commendations and the coveted Combat Medic Badge for her service. Gabbard went on to graduate from Officer Candidate School and was trained as a Military Police Officer. Later she completed a second tour of duty in the Iraq theater, commanding a Military Police Company stationed in Kuwait.

For Gabbard, the road to Damascus began with her initial deployment to Iraq and continued through her 2009 deployment to Kuwait. Having enlisted in response to the terrorist attacks of 9/11, Gabbard instead found herself engaged in a “regime change” war in Iraq predicated on the lie of weapons of mass destruction. It then continued through the halls of Congress, following Gabbard’s successful bid for office in 2011. From her position as a member of the Armed Services Committee, she watched as the al-Qaeda enemy she’d fought in Iraq morphed into ISIS and spread its influence into Syria.

Over the next few years, Gabbard saw how the Obama administration began, in her words, “funneling weapons and money through Saudi Arabia, Turkey, Qatar and others who provide direct and indirect support to groups like ISIS and al-Qaeda” in an effort to overthrow the Assad regime. “If you or I gave money, weapons or support to al-Qaeda or ISIS,” Gabbard declared via Twitter, “we would be thrown in jail. Why does our gov get a free pass on this?”

For someone who watched her fellow soldiers die fighting al-Qaeda in 2005, the Obama policy of supporting terrorists, whether directly or indirectly, as part of a new regime change war against Syria was a betrayal of that sacrifice.

A vocal supporter of Senator Bernie Sanders during the 2016 presidential election, Gabbard opposed Hillary Clinton’s more hawkish policies on Syria. Following Clinton’s defeat at the hands of Donald Trump, she continued to flaunt the rules of political expediency, taking a meeting with the president-elect in order to discuss Syria and the fight against ISIS and al-Qaeda. “I felt it important to take the opportunity to meet with the president-elect now,” Gabbard noted at the time, “before the drumbeats of war that neocons have been beating drag us into an escalation of the war to overthrow the Syrian government.” [Editor’s note: the neocons’ push for war was largely on behalf of Israel.]

In January 2017, Tulsi embarked on her fateful visit to Syria. As she told CNN’s Jake Tapper during an interview after her return, she hadn’t planned on meeting with the Syrian president. When the opportunity presented itself, however, Gabbard stated that she went “because I felt it’s important that if we profess to truly care about the Syrian people, about their suffering, then we’ve got to be able to meet with anyone that we need to if there is a possibility that we could achieve peace, and that’s exactly what we talked about.”

“Obviously,” Tapper stated in response, “Bashar al-Assad is responsible for thousands of deaths and millions of people being displaced during this five-year long civil war. Did you have any compunctions about meeting with somebody like that, giving him any sort of enhanced credibility because a member of the United States Congress would meet with someone like that?”

In the aftermath of President Trump’s three meetings with North Korean dictator Kim Jong-un, Tulsi’s observations don’t seem quite as controversial. But at the time she was lambasted by her colleagues in Congress for ostensibly giving credence to Assad, whom they labeled a “brutal dictator.”

If the U.S. succeeded in overthrowing Assad, Tulsi knew, the very terrorists she’d fought against in Iraq would end up ruling Syria. Meeting with Assad to discuss the prospects of defeating a common enemy was the most meaningful way she could honor the service and sacrifice of her fellow soldiers. That the mainstream media and detractors like Kamala Harris don’t get this only underscores the deep divide between those like Tulsi Gabbard, who have served in combat, and those who have not.

Gabbard’s performances in the first two Democratic debates were strong, but it remains an open question as to whether she will qualify for the third debate in September. At a time when she should be campaigning hard to secure a spot on that debate stage, however, she’s instead taking a two-week break to fulfill her annual training requirement as an officer in the Hawaii National Guard.

Kamala Harris and the other Democratic candidates would do well to take note of the following reality—if the U.S. goes to war in Syria, Iran, North Korea, or elsewhere, Tulsi alone among her colleagues could be called upon to serve on the front line.

“The Congresswoman [Gabbard] is the most qualified and prepared candidate to serve as Commander in Chief, which I believe is the most important responsibility of the President,” Senator Mike Gravel, a Democrat who represented Alaska in the Senate from 1969 through 1981, noted in his letter endorsing Tulsi for president. Gravel, an Army veteran, is perhaps most famous for placing the Pentagon Papers in the public record in 1971. A popular progressive voice for peace, his endorsement should not be taken lightly. Kamala Harris should take note.

Scott Ritter is a former Marine Corps intelligence officer who served in the former Soviet Union implementing arms control treaties, in the Persian Gulf during Operation Desert Storm, and in Iraq overseeing the disarmament of WMD. He is the author of Deal of the Century: How Iran Blocked the West’s Road to War.