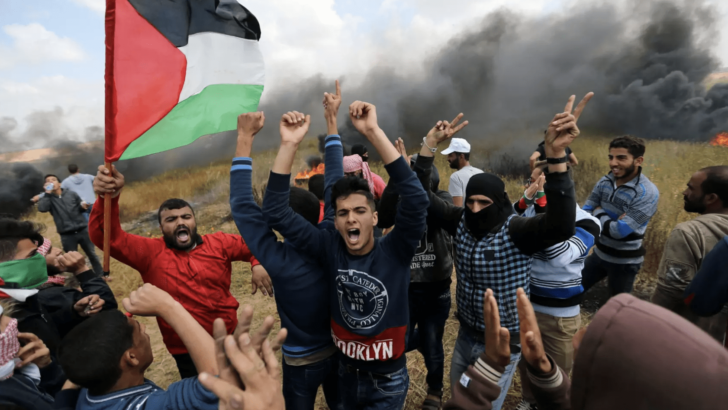 Palestinians shout and flash peace signs during nonviolent demonstrations, as Israeli troops use rubber bullets and live ammunition along the Israel-Gaza border

If Americans Knew has reported in the past, and it is still true: mainstream media is getting it wrong on Israel/Palestine. Sources that are otherwise accurate and reliable – WaPo, CNN, NYT, and AP – continue their routine of mis- and under-reporting Israel’s violence toward Palestinians while exaggerating Palestinian misconduct.

Corporate media help set the terms of debate about the issues they cover by pointing toward specific sets of questions and ignoring others. When news outlets highlight particular points of contention, they encourage audiences to see these as the central aspects of the story and discourage consideration of other facets of the topic. Recent reporting on the Palestinians’ Great Return March offers a case study in how news media establish truncated, distorted parameters of discussion.

During the recent demonstrations in Gaza, Israel has injured nearly 3,000 Palestinians and killed 35 of them, while there have been zero Israeli casualties. Yet a Washington Post report (4/20/18) devotes portions of 10 of its 29 paragraphs to the spectre of Palestinian violence, making references to “molotov cocktails” as well as “masked youths [who] launched kites with rags and plastic bottles attached, which they set alight with lighter fluid,” and including quotes from Israeli officials describing Palestinians as participating in “violent riots.”

A quarter of the paragraphs in a CNN article by Ingrid Formanek and Ian Lee (4/17/18) cast Palestinian actions as violent or threatening, largely through the use of quotes from Israeli officials making baseless claims about Palestinian demonstrators trying to “carry out terror attacks” and other such falsehoods. Similarly, five of the 16 paragraphs in a CNN article by Ian Lee, Abeer Salman and Ameera Ahmed  (4/20/18) portray Palestinians as violent or menacing, in one case amplifying Israel’s groundless assertion that the Palestinians killed by Israel were “known terrorists.”

Devoting substantial attention to the question of Palestinian violence, as each of these articles does, carries the suggestion that readers should be assessing how violent the Palestinians were in order to determine whether Israel was justified in killing them.  Coverage shouldn’t be fostering a debate about Palestinian violence during the Great Return March, since it’s been essentially nonexistent (though it’s worth noting that Palestinians have a right under international law to resist occupation via armed struggle). Instead, coverage ought to foster discussion about how to rein in the extreme violence that Israel is actually inflicting.

The Focus on Hamas

A subset of the outsized focus on Palestinian armed resistance is coverage that concentrates on assessing Hamas’ role in the demonstrations. The Post article notes that “Israel has accused Hamas, which the United States has designated a terrorist organization, of using civilian protesters as shields to ‘terrorize Israel,’” though there isn’t a shred of evidence of Palestinians “using civilian protesters as shields,” and though no Israelis have been harmed during the demonstrations.

A piece by David Halbfinger in the New York Times (4/15/18) revolves around whether Hamas is committed to nonviolence. The article describes the organization as “the Islamic militant group that has tried suicide bombs, rockets and attack tunnels in its long struggle with Israel.” The piece quotes Hamas political leader Ismail Haniya advocating peaceful protest, and then says:

Minutes later, though, he called the same protests “a deadly weapon” with which to achieve the Palestinians’ goals, saying that guns, rockets and attack tunnels—the more familiar weapons that have kept Hamas listed as a terrorist group by the United States, European Union and Israel—remained at hand if needed.

Though both the Times and the Post note that the US and its allies consider Hamas a terrorist group, neither publication provides background information about the institutional character of Israel, such as a United Nations report’s finding that it is an apartheid state (Reuters, 3/15/17). This framing encourages debates about the Great Return March to pivot around whether Israel has the right to use force against an outfit that “the United States has designated a terrorist organization,” rather than how Palestinians might be able to protect and emancipate themselves from an apartheid regime.

An Associated Press report (4/26/18), furthermore, says that “any degree of nonviolence would be a striking departure for Hamas, which over the years has attacked Israelis with suicide bombings, shootings and rockets.” The authors write that “Hamas says it wants to keep its weapons for defensive purposes — a claim undercut by the group’s tunnel program,” mischaracterizing Palestinian violence as offensive, which by definition it cannot be, since they are subject to a brutal military siege that constitutes an act of war.

The AP, Times and Post reports encourage debate about whether Hamas will refrain from violence, and are premised on the assumption that it ought to do so despite Israel’s military occupation of Palestine. None of the articles, however, encourage public discourse about Israel renouncing its violent occupation and colonization.

That the only Israeli crimes that are mentioned in these three reports are the lethal violence it has used during the Great Return March could leave readers who are not well-versed in the subject with the mistaken impression that such conduct isn’t a longer-term feature of Israeli policy. All three articles enumerate past instances of Hamas violence, failing to note that this happened in the context of Israel’s systematic denial of Palestinian rights, and none of them provide a clear sense of Israel’s history of using much larger-scale and much more deadly violence to oppress and dispossess Palestinians, practices that have gone on since decades before Hamas even existed. The cumulative effect is to establish parameters of debate within which Hamas is understood to be irrationally wedded to violence for its own sake, while Israel is presented as, at worst, overreacting to provocations from a criminal organization.

That media help make these the terms of discourse reduces the likelihood that public discourse will be about compelling Israel and its US patron to end their efforts to consolidate wholescale domination of all of historic Palestine and the broader Middle East, or about how Palestinians’ long-delayed liberation can be realized. In this regard, the way that the media frame debates about Palestine/Israel undermines the likelihood of successful movements for peace and justice in the region.