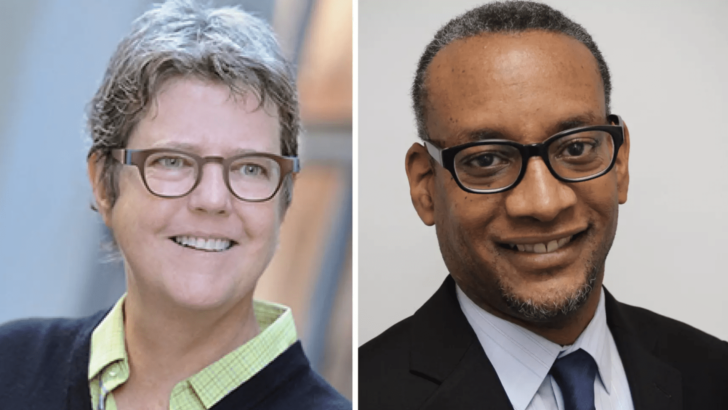 Columbia University law professor Katherine Franke, and executive director of the Center for Constitutional Rights Vincent Warren, say they were questioned by Israeli security at Ben Gurion Airport, detained 14 hours, and accused of lying before being flown back to New York Monday.

Israel detained two prominent U.S. human rights lawyers for 14 hours at Ben-Gurion Airport on Sunday, accusing them of being involved in the BDS movement, before deporting them back to the United States.

Israeli security officials allegedly accused Katharine Franke of lying about her affiliation with a Jewish group that advocates for boycott, divestment and sanctions against Israel. Vincent Warren was also barred from entering the country.

The two, who denied all allegations against them, had arrived to lead a delegation of 15 fellow human rights activists touring Israel and the West Bank. The party was described as mostly “black and brown civil and human rights leaders working on domestic U.S. justice issues who have not had an opportunity to visit Palestine and Israel.” The group included Tamika Mallory, a well-known name in the U.S. as co-chair of the Women’s March. She has been criticized for refusing to condemn the anti-Semitic Nation of Islam leader Louis Farrakhan.

Franke, a Columbia University law professor, was barred from entering because of her “prominent role” with Jewish Voice for Peace, said a spokesman for the Strategic Affairs Ministry, which handles BDS issues. The spokesperson preferred not to be named.

Neither the spokesperson nor the Interior Ministry had an explanation for why Warren, executive director of the Center for Constitutional Rights, a progressive nonprofit legal advocacy organization based in New York City, was also barred. Franke is a board member.

Franke denied that she was in any way a leader or even currently involved in JVP – one of 20 groups on an Israeli BDS blacklist that bars members from entry to the country. However, she has worked on JVP’s academic advisory council in the past, she said.

Franke also said she has publicly endorsed the academic boycott of Israel, which means she does not work with state-funded institutions, but she does work with individual Israeli academics and students.

In a tweet with a photo of Franke and Warren under a “Welcome” sign – which they sent on the way out of country – Warren wrote, “Don’t let the ‘Welcome’ sign fool you, it doesn’t apply to #humanrights.”

Don’t let the “Welcome” sign fool you. It doesn’t apply to #humanrights. Center for Constitutional Rights Executive Director and Board Chair Both Denied Entry into Israel https://t.co/1KgPUyEqXw pic.twitter.com/zSHwOPRT4r

The so-called justice delegation was planned to provide an opportunity for several Latino, Native American and African-American civil rights lawyers and legal academics to better understand the human rights situation in Israel and the occupied territories, the group said.

Organizers said it was a way for the delegation members to meet fellow Israeli and Palestinian lawyers and activists who, like them, they said, worked on issues of institutionalized racism, immigration rights and the treatment of asylum seekers.

Franke, who is on the executive committee of Columbia University’s Center for Palestine Studies, has visited Israel many times previously, most recently last October.

The trip would have been Warren’s second to Israel. He first visited in 2016, leading another delegation that also met with Israeli and Palestinian human rights groups.

Both Franke and Warren, along with the rest of their group, had exited passport control and were waiting for their bags when the pair were stopped by security officials and taken away for questioning, they said. The two were separated during the questioning.

Franke alleged that the security official who questioned her showed her a far-right website on his phone, which, she said, appeared to be an “anti-BDS troll website” accusing her of being an enemy of Israel.

She said the official called her a leader of JVP and the BDS movement itself. She said that when she denied this, he repeatedly accused her of lying.

The far-right website “claimed that I hate Jews, am anti-Semitic, and work to destroy the State of Israel – none of which are true, of course,” she told Haaretz.

“And I don’t work or volunteer for JVP,” she added. “I know people who work at JVP and I associate with them, but I don’t work for them and am certainly not a leader of the BDS movement.”

Warren said the man who questioned him began by showing him a copy of Franke’s passport with the letters “BDS” written on it. Warren said the security official offered this as seeming evidence that she was a BDS leader.

He also allegedly showed Warren right-wing websites accusing Franke of BDS activism. “Being a lawyer, and the internet being what it is, I could see this was pure conjecture,” Warren told Haaretz. “I asked him what about me was problematic. And he did not answer, but basically said I was lying.”

“This was not based on any fact that would lead anyone to conclude we were a threat, lying or otherwise violating any of the rules of entry,” said Warren.

Israel published its BDS blacklist, detailing 20 groups whose leading members would be turned away from Israel’s borders, in January. However, the government was left red-faced last month when it announced it had barred the lord mayor of Dublin from entering Israel, only to learn that a bureaucratic snafu meant Mícheál Mac Donncha had already entered the country and was in the Palestinian city of Ramallah.

J Street, the liberal pro-Israel lobby issued a comment in response to Franke and Warren’s deportation.

“This action is the latest alarming example of the Israeli government’s efforts to silence political dissent and criticism of its policies and to suppress the activities of human rights advocates. These efforts are rapidly eroding Israeli democracy.

Whatever the views of these activists, they should be allowed to travel freely within Israel and the Palestinian territory to see and judge for themselves the reality on the ground, and to learn from the work being done by their Israeli and Palestinian counterparts. Banning progressive activists from entering the country only undermines Israeli democracy — and empowers the global BDS movement that the Israeli government aims to combat,” the statement said.

“Shared democratic values have long been central to the US-Israel relationship — and they are increasingly under threat. American Jewish, pro-Israel leaders must now do everything they can to speak up and act in defense of these values.”